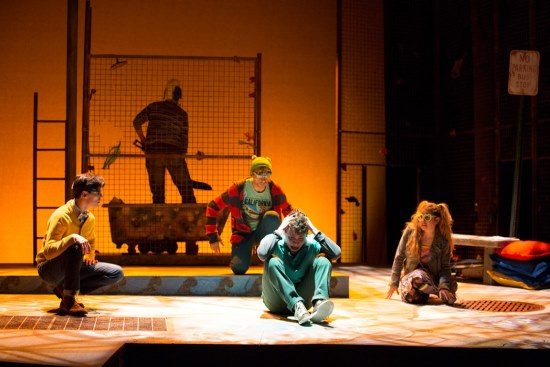 One of the toughest things in theatre is to take an adult topic and make it palpable for young audiences. Jason Invisible currently running in The Kennedy Center’s Family Theater takes on such a topic-mental illness and does so in a way that is thoroughly engaging throughout.

‘Jason Invisible’ is an important piece of theatre…

With a neat multi-leveled set designed by Misha Kachman and a top notch group of performers, we meet Jason Papadopoulos (Mark Halpern), a boy who has lost his Mom. His Dad (Michael John Casey), is a man who has become mentally ill. He wears a gladiator type hat, calls his son Olympus, and says he is protecting him from the furies. Because of all of this, Jason is now taking care of his Dad, but there is no money for heat or food. He has no friends except for the three voices in his head. We have S.G. (Michael V. Sazonov) who is the always-do-the-right-thing one of the bunch. Next, we have Dream Girl (Rana Kay) who thinks Jason looks hot all of the time and is the confidence booster. Then, we have Crazy Glue (Christopher Wilson) who has glued the fingers on one of his hands together and obviously lacks good judgment. 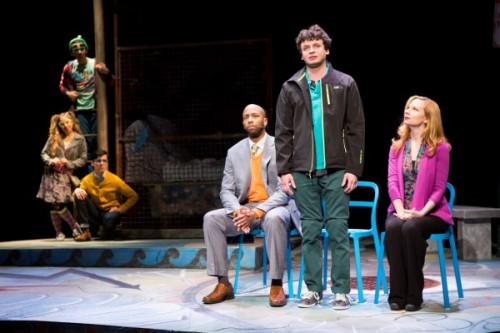 After Jason grades take a nose dive, he is placed in school psychologist Dr. Gomez’s (Susan Lynsky) small help group so that he can talk out what is going on with him.  This is where the story really takes off. The three others in the group (played by the same actors as the voices in Jason’s head) have a dilemma. It is whether or not to tell Gomez about what they saw with Jason’s Dad. When a man from family services (Mark Hairston) shows up at Jason’s home….. well this is where I stop telling the story, as I might have said too much already.

Jason Invisible,  as adapted by Laurie Brooks from the book Crazy by Han Nolan and expertly directed by Rosemary Newcott is a world premiere commission by the Kennedy Center and VSA. It has a lot to say about mental illness and the effects it can have on family members. It also raises the question of when is it time to let go and let the professionals do their job. As an audience member, you even get a chance to be involved. I am not saying how, but it does add a nice touch to the end of the show.

Performance wise all of the performers are excellent. Mark Halpern as Jason gives a touching performance as he tries to do what he thinks is the right thing for his Dad. Michael John Casey as Dad never overdoes the mental illness component in his performance. This is a case where less is more. His subtleties make his illness palpable for younger children while getting the point across.

Susan Lynsky as Dr. Gomez and Jason’s Teacher Mrs. Silky turns in another great performance. Her Gomez has compassion and so much more.

Mark Hairston as Sam, the no nonsense family services guy, also turns in a solid performance. 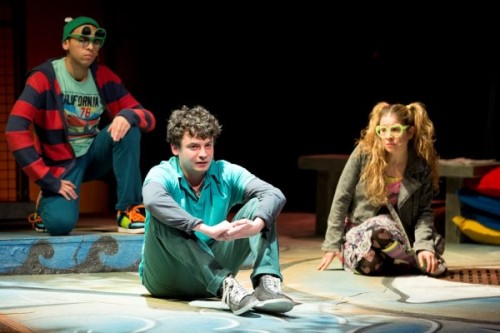 The trio of actors that play the voices in Jason’s head and the kids in Gomez’s group show great versatility. On the one hand, you have these figments of Jason’s imagination telling him all these different things and then you have the very real characters that are sympathetic towards Jason because they are all going through something in their lives as well. Two different characters for each actor and they have risen to the challenge beautifully.

Besides Misha Kachamn’s setting Kyle Grant’s lighting and Christopher Baine’s soundtrack of what is going on his Jason’s head, adds to the stellar production elements of the show. I also want to mention that this is the second time I have heard the wonderful musical scoring of Ryan MacKenzie Lewis and again his score really enhances the story. A shout out to B-FLY choreographer extraordinaire Paige Hernandez for her work on the production as well.

I applaud Rosemary Newcott for choosing not to over schmaltz the story in her direction. Let’s face it, you don’t want younger kids to see the graphic things that mental illness can do to a person, but you can show it in a way that gives kids the idea. Newcott and company have succeeded in doing so.

Jason Invisible is an important piece of theatre that your kids will enjoy while they learn something at the same time. I always say theatre should educate as well as entertain. Jason Invisible definitely does both.

Suggestion: While this show is recommended for kids 11 years old and up some younger children will be ok watching it as well. Just be sensible and leave the six-month-old at home.

Running Time: 73 minutes with no intermission.