Theatre Review: ‘1776’ at The Colonial Players of Annapolis 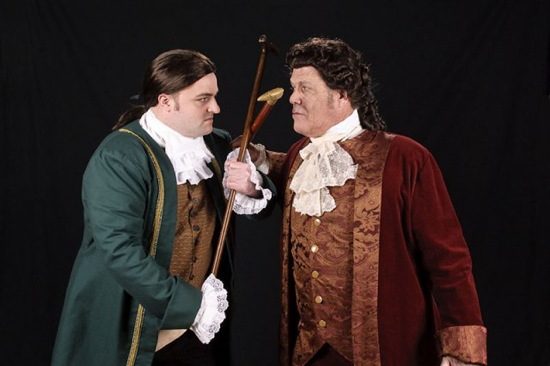 Jeff Sprague as John Adams and Timothy Sayles as Dickinson.
Photo by The Colonial Players.

The Colonial Players’ Production of the musical 1776 is a delightfully entertaining way to learn about how we became the United States of America.  The theatre-in-the-round design is perfect for this production as the entire audience can see the historically accurate, intricate details of everything from the correctly crafted stools to the horsehair flyswatter used to shoo the flies that were a particular nuisance during summers in Philadelphia.

1776 begins with John Adams (an appealing Jeff Sprague) and the rest of the Continental Congress singing “For God’s Sake, John, Sit Down.”  This song sets up the rest of the show because, like in history, John Adams is at odds with over half of the Congress on the issue of declaring independence from England.  Pennsylvania Representative John Dickinson (a talented and convincing Timothy Sayles) is Adam’s biggest rival, as he sees England and King George as a protector and champion.

…it is a triumph to gather so many talented performers for one production!

The independence issue is debated back and forth throughout that hot summer, while songs like “Yours, Yours, Yours” and “He Plays the Violin” introduce the family side of these great men.  In “He Plays,” Thomas Jefferson’s wife, Martha, sings to Benjamin Franklin and John Adams about her husband’s love of music and poetry. In “Yours, Yours,” John Adams and his wife, Abigail, sing about their sick children and how wives can help the war effort, and despite the unromantic subject matter, their love for each other still shines through. 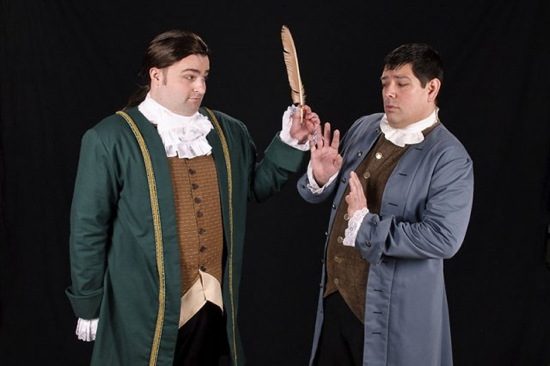 Vince Musgrave as Roger Sherman.
Photo by The Colonial Players.

John Adams doesn’t give up and begins to sway more Representatives to his side with the writing of the Declaration of Independence.  A few clauses are added and crossed out to get all the Representatives to agree to the Declaration, most notably the removal of any mention of abolishing slavery.  Although slavery was struck from the final Declaration weeks before the vote in Congress, that debate becomes the last-minute climax in the theatrical version. Edward Rutledge of South Carolina (a brilliant Ron Giddings) sings “Molasses to Rum,” a song about how each and every Representative has a monetary stake in the slave trade and which many consider to be the best song in the show.

It is impressive that The Colonial Players, a community theatre, was able even to recruit the number of men needed for 1776, but it is a triumph to gather so many talented performers for one production!