Theatre Review: ‘A Behanding in Spokane’ at Keegan Theatre 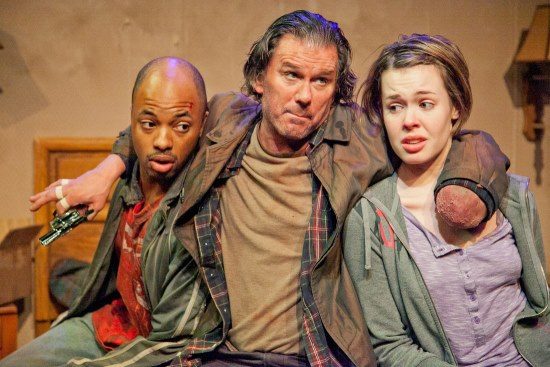 To say that the Keegan Theatre’s production of A Behanding in Spokane is “fun” would be misleading, and would probably reveal more about the speaker than the show, for what can you really say about a person who laughs at a severed hand.  To say that the show is the product of a “sick” mind, or as the advertising for the production states—a “brilliantly twisted mind” would ignore the all-too-common occurrence of such similarly horrifying incidences in America today.  If the playwright is “sick,” then so too is a large swathe of contemporary Americans.  To say that Martin McDonagh’s script explores the dark heart of American racism and violence, would give the playwright far too much credit for a play which at some levels is more like an extended 1970’s Saturday Night Live skit where two parents throw a newborn around the stage during a heated argument over who should put the kid to sleep.

Smith’s direction allows the script’s funny moments to shine, and the ensemble does a reasonable job of portraying them.

No, A Behanding in Spokane is what it is: 90 minutes of degeneration that will occasionally put a smile on your face or usher a chuckle from your parted lips but will neither leave you with a bellyful of catharsis nor a clear sense of why you have just spent an evening communing with such lowly misbegotten souls.

This criticism does not mean to suggest that the actors and production staff have not done a solid job bringing this macabre story to life.  For they have.  The problem lies more in McDonagh’s script, which from the beginning leaves little space for the characters to develop and grow.  To be sure, A Behanding in Spokane is “twisted,” but one could argue that it is no more twisted than your average HBO series these days, which leave little doubt that American (or European) culture has completely lost its ethical sense.  And even though the playwright tacks on a strange cryptic ending, almost as if he suddenly decided to get serious about his protagonist’s obsession, the move only puts a confusing ending on an oddly straightforward if pointless story. 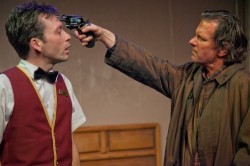 The story’s premise is fairly simple, even if it is “twisted.”  We meet Carmichael, played with grime and sophistication by Mark A. Rhea, in an appropriately seedy hotel room designed by Colin Smith (who also directed).  Carmichael has come to this small town in “somewhere” America in search of his hand.  Yes, that’s right.  Twenty-seven years ago his hand was removed from his arm, and he has spent his life trying to recover it.  That’s right.  Don’t ask what condition his actual hand would be in after 27 years.

Marilyn and Toby have answered Carmichael’s $500 reward for his hand by stealing a severed hand from a local museum.  Yes, that’s right—a local museum has a severed aborigine’s hand on exhibit there.  When their attempt to swindle the one-handed man backfires—for Carmichael is white and probably a member of a white people’s resistance group—they find themselves face-to-face with his mission in life.  Now, they must do everything possible to simply survive the ordeal. Played by Laura Herren and Manu Kumasi, these two small time lovers and dope dealers do well capturing the comedy of their bizarre situation. 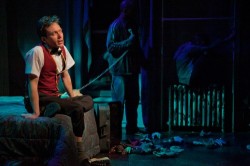 Finally, there is the enigmatic Mervyn, the hotel receptionist who does not want to be known as a receptionist.  Bradley Foster Smith embodies to the letter this mentally off young man whose primary function is to fantasize about heroism: if only he had the opportunity to stop a tragedy, but not to stop it all together.  He wants to wrestle the gun away from a Sandy Hook like shooter after only, say, 12 people have died.  That way the massacre partially happens and he can be a real hero and win the girl. Yes, that’s right.  There has to be a pretty girl involved, who has not been killed or seriously injured so that he can then ride off with her into the sunset.

Director Collin Smith and his production team have offered us a relatively realistic vision.  Along with his set, we have costumes (Kelly Peacock) and lighting (Megan Thrift) and sound (Tony Angelini) that reinforce the idea that we are in lower class America.  Smith’s direction allows the script’s funny moments to shine, and the ensemble does a reasonable job of portraying them, but the script and its flaws demand more: the script’s situation demands an even deeper depth of the depravity.

At one point Toby remarks that Carmichael is uniquely obsessed; he is so obsessed with recovering his hand that, if he were to focus on something like the environment, he could probably put an end to all environmental damage in a relatively short period of time by brutally killing the offenders.  Unfortunately, the vision brought to life on Keegan’s stage stops short of that level of obsession—the level that leaves “reasonable” in the audience and puts pure, unbridled, reckless brutality on the stage, a brutality that can only be checked by a mother who is, ironically, apparently more twisted and more brutal even than the play’s protagonist.

A Behanding in Spokane plays at Keegan Theatre, at its 1742 Church Street Theatre, through April 7.  For information or tickets click here.