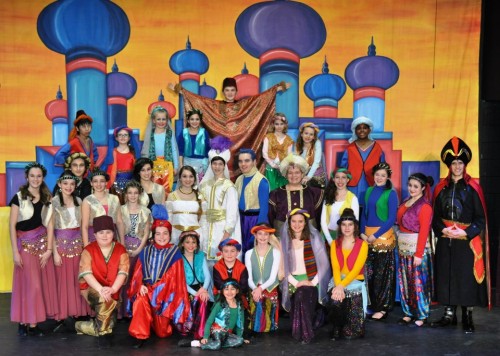 The cast of ‘Aladdin, Jr.’ Photo by Karis Haslam.

Winner of the Best of 2012 Reader’s Choice Award from MD Theatre Guide for “Best Arts and Education Institution for Children/Young Adults,” the Children’s Playhouse of MD continues their excellence in the performing arts for children with their current production of Disney’s Aladdin, Jr.

Inside the Royal Palace gates in the faraway city of Agrabah, Princess Jasmine (Sheridan Merrick) prepares to choose a husband. Against Jasmine’s wishes, her father the Sultan (Connor Moore) insists that she pick from among three visiting Princes by tomorrow. In Jafar’s (Josh Schoff) chambers, the villainous vizier and his sidekick parrot Iago (Will Foohey) secretly rewrite a law so that the Princess will have to marry the Sultan’s highest-ranking official, Jafar if she fails to choose a husband within the time allotted.  Aladdin (Gino Cardoni), a poor street urchin, is thrown into a dungeon in the cave for stealing a loaf of bread.  There Aladdin finds an old lamp and rubs it, releasing Genie (Zach Miller) who grants him three wishes.

Even its youngest cast members (as young as age 4) perform exceedingly well, projecting charisma in all of their songs, including “Friend Like Me,” complete with a wonderful MGM pose at the end.

The book by Jim Luigs, based off of the original Disney film, has adapted the script to give more opportunities for ensemble members.  In particular, three princes come try for Jasmine’s hand in marriage. Also, there are five narrators (Zoe Feldman, Rachel Miller, Allison Naglieri, Allison Mudd, and Nicole Arrison) who perform in “Arabian Nights” along with two reprises. They also have “red carpet interviews” with several characters at the beginning of the show.  In this “Jr.” version, there is no Abu, the monkey and Rajah, the tiger.  But don’t worry, there are plenty of elements which makes this version enjoyable.

Wesley Brown plays the part of the Magic Carpet.  His smile is infectious!  Holding his head up high with shoulders back, Wesley wears his costume with pride, making his performance truly magical. 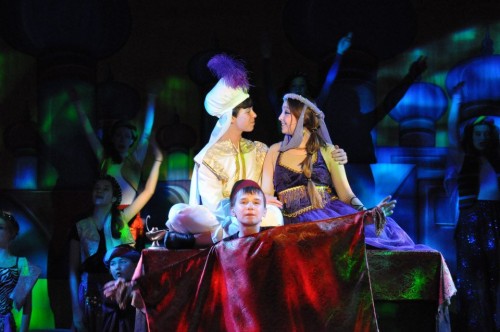 Gino Cardoni brings his boyish charms and good acting to his role as Aladdin.  Communicating his lines very well to the audience, he particularly succeeds in the scenes when trying to hide his true identity from Princess Jasmine when he is parading around as Prince Ali.

Sheridan Merrick brings a lot to her role as the spunky Princess Jasmine.  Her singing voice is as strong as her character as highlighted in the song, “A Whole New World.”  But perhaps her best quality is her superb speaking voice which is rich, warm, and clear.

Painted by Laura Miller, the huge colorful backdrop of  the Royal Palace brings that “wow” factor to the production.

A few special effects added to the production.  The Genie made an entrance one could only wish for, making the children in the audience raise their eyebrows and drop their jaws as Genie entered the stage with a huge flash and a puff of smoke.

Winner of the Best of 2012 Reader’s Choice Award from MD Theatre Guide for “Best Director of a Children’s Theatre Musical/Play or Young Adult Production” for CPM’s production of The Little Mermaid, Jr., Director Liz Boyer Hunnicutt has a knack for bringing out the best in all those around her. This includes the really talented large ensemble, dancing to the exciting songs choreographed by Amanda Dickson.  Even its youngest cast members (as young as age 4) perform exceedingly well, projecting charisma in all of their songs, including “Friend Like Me,” complete with a wonderful MGM pose at the end.

Running Time:  Approx. 1 hour and 30 minutes with one intermission. 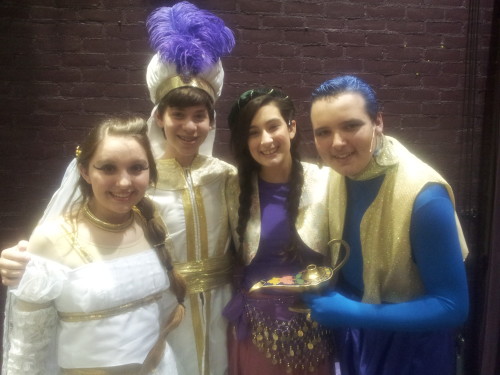