Theatre Review: Cathy Rigby is ‘Peter Pan’ at The Lyric 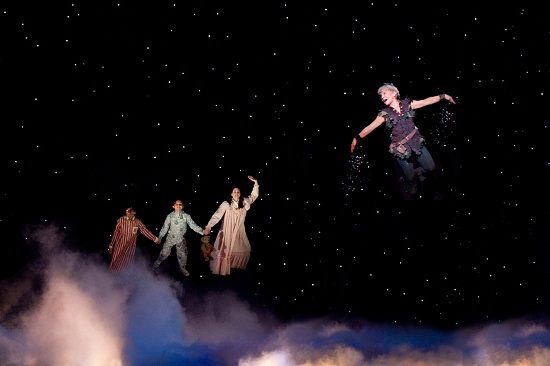 Your heart will fly on wings in what is the most heartfelt and high-flying Peter Pan ever produced for the stage.  Cathy Rigby is Peter Pan in the national tour which landed at The Lyric in Baltimore last night to a packed house of young and young at heart.

The story begins in the nursery of the Darling residence where Mrs. Darling (Kim Crosby) is getting her children ready for bed; Wendy (Carly Bracco), the oldest, John (Lexy Baeza) who sports a top hat, and Michael (Hadley Belle Miller), the youngest who carries around a teddy bear.  After Mr. Darling (Brent Barrett) attempts to give the children their medicine, he sends Nana (Clark Roberts), their big fluffy dog, outside for the evening.  All are tucked in bed, but not much sleeping will happen this night.  Peter Pan (Cathy Rigby), the boy who wouldn’t grow up, flies through the bedroom window to retrieve his shadow.  Peter’s friend Tinker Bell, who is a fairy, shows Peter where his shadow is hidden.  After Peter sprinkles fairy dust on the children, all of them fly to Neverland and that is where their adventures begin. Not all is peaceful in Neverland.  Everyone is always on the run from the mean-hearted Captain Hook (Brent Barrett) and his sidekick Smee (James Leo Ryan), including the lost boys and Tiger Lily (Jenna Wright).

Creating the most dazzling high-flying sequences ever produced for Peter Pan is Paul Rubin.  He has choreographed flying sequences in over 300 different productions of Peter Pan in more than 10 countries.  Of course it helps that he has Cathy Rigby, a former Olympic gymnast, to fly across the stage with a variety of acrobatics, featuring dizzying spins and breathtaking forward and backward flips.  There is even a special surprise flying effect at curtain call which will make make you believe in the magic of Peter Pan.

The music is written by a variety of lyricists and composers including Jule Styne, known for such musicals as Gypsy and Funny Girl.  Styne’s music for the song “Neverland” is tender and dreamy.  Other song classics include “I Gotta Crow,” “I’m Flying,” and “I Won’t Grow Up.”  This touring show is backed by 14 lives musicians led by musical director/conductor Bruce Barnes. 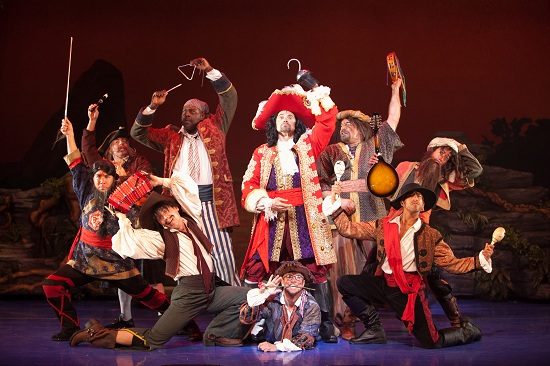 Brent Barret (Hook) and the Pirates in ‘Peter Pan.’ Photo by Isaac James.

To the children, Cathy Rigby is just Peter Pan.  For the adults, they remember her as an Olympic gymnast and “ABC Sports” commentator.  The same dedication and hard work that Rigby put into training for the Olympics was put into her new career in the performing arts.  Before hitting the stage, for seven years she went through intense vocal and theatrical training.  It paid off.  In 1991, Rigby was nominated for the Tony Award for Best Leading Actress in a Musical when she starred in the 35th Anniversary production of Peter Pan on Broadway.

From head to toe, Cathy Rigby’s performance is very well thought out.  She has a tough boyish attitude expressed through her husky speaking voice and impeckable body movement.  How many other actresses would be able to sing, do cartwheels across a bed, sing some more, and then do a forward flip and do a split at the end as in the song “I Gotta Crow”?  It is to be expected for her to use a kinesthetic approach to her character, moving about the stage in a clear, concise manner. But its not just her acrobatic skills which makes her the consummate boy who wouldn’t grow up.  There is a natural innocence she brings to the character, helping to make audiences believe in Neverland.  What is more, her singing voice is smooth and lyrical.  She never tries to over sing a song, making the importance of story telling through song paramount.

Your heart will fly on wings in what is the most heartfelt and high-flying ‘Peter Pan’ ever produced for the stage.

Brent Barrett’s comedic Hook never failed to liven things up whenever he appeared on stage in his magnificent red pirate costume and hook for left hand.  Just as magnificent is his very strong singing voice as showcased in the song “A Princely Scheme.”  Peter Pan describes Hook best when he says that Hook is a “stinking cod fish!”

Patti Colombo’s artsy choreography is particularly interesting during the sequences featuring the beautiful and talented dancer Jenna Wright as Tiger Lily who is first seen sliding down a fabric vine in the woods.  The most intricate dance number is at the top of the second act with “Ugg-a-Wugg.”  The song features earthy choreography with cast members holding sticks and banging them on everything around them like a drum.  Even little Michael gets in on the fun and does a cartwheel, all while in his pj’s.

This production is a rare opportunity to see Peter Pan at its best.  See it before it flies out of town!

Cathy Rigby is Peter Pan is this weekend only at The Lyric, 110 W Mt Royal Ave, Baltimore, MD 21201.  For tickets and information visit online.