Theatre Review: ‘Don’t Dress for Dinner’ by the British Players 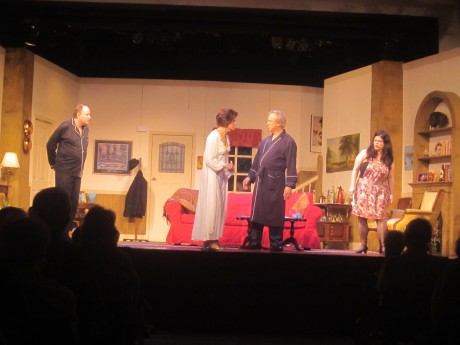 The cast of ‘Don’t Dress for Dinner.’ Photo courtesy of The British Players.

Fancy the British Players to serve up the head-spinning puff pastry, “Don’t Dress For Dinner,” as their spring offering. An absorbing bon mot, it is a fast paced sex romp with clothes on and gloves off–a tale of casual infidelity, switched identities, sight gags, bad puns (is there any other kind), and surprise visitors. In short, your usual complicated froth of a farce, where upturned eyebrows and askance glances away from a person are tools of the trade.

We first meet our conniving couple Bernard and Jacqueline, planning their weekend in a French farmhouse outside of Paris–nicely created in depth by Albert Coia and Mike Lewis. Husband Bernard (Peter Harrold), an aging hound dog, is set to have his mistress come for the weekend since his wife is visiting her mom. Jacqueline (Kathryn Browning) knows something is up when the cook is hired for the evening. Bernard’s friend Robert (Colin Davies) is also invited, for cover. But we now learn that Robert and Jacqueline are more than friends. Jacqueline fakes a cold, says her mom has the flu and she will be staying home, and the devilish deceit begins.

After much convincing, Bernard finally enlists a reluctant Robert to help him in the chicanery, telling him to act as if his mistress Suzanne (Vanessa Terzaghi) is actually Robert’s mistress.  When the cook arrives, conveniently named Suzette, Robert mistakes her for Suzanne. After telling her to become his mistress, in an uproarious scene, she decides to play along. When Bernard and Jacqueline return from shopping, and the cook is introduced as Robert’s lover, the chain of subterfuge is set.   The “real’ mistress arrives, and Bernard quickly tells her that she must play the role of the cook, until their rendezvous later. She reluctantly agrees, a walking sight gag as a pouty, leggy cook wearing a camisole and apron. 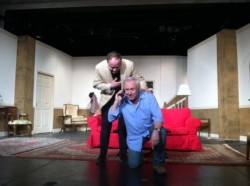 But the puppetmaster in this farce is Suzette the cook, played with a latino accent and cheeky resolve–coincidentally by Anne VanderCook.  The outsider thrust into the deception of the evening, she shifts roles and adroitly has the men “pay up” every time they add complexity to their scheme.

She has ample fun going from shocked cook to an opportunistic actress cashing in on the men’s attempts at cover up. One would like to have had her play even bigger at some points. The middle aged buddies, Bernard and Robert, had a built in advantage in the king’s speech, and wife Jacqueline was passable vocally in a stern upper crust way. In an attempt to smooth things over for the group, Robert gives a tongue twisting absurd monologue tracing the goings on—a microcosm of the farce itself.

Constant twists and turns add to the zaniness until Suzette the cook’s husband arrives to pick her up. Played as an imposing figure, George (Michael Abendshein) rumbles in and demands to know where his wife is. She explains that they are all playing a game, that everyone is related to each other. This assuages George’s anger. As the evening draws to a close, who winds up with whom?

Fun all around, yet farce must be constantly pushed to the edge to keep the absurdity level high. Our players could have made some of the big moments stand out.  Director Chrish Kresge and Producer Caroline Gelb have staged a crisp show, though pacing could have been quicker at times. Still, a grand chuckle of an evening. Of course, if delicious deceit is not your favorite entrée, don’t come to dinner at all.

Don’t Dress For Dinner is presented on March 8-24 by the British Players at the Kensington Town Hall, 3710 Mitchell St, Kensington, MD 20895.  For more information go here.