Theatre Review: ‘Dorothy and the Wizard of Oz’ at Pumpkin Theatre 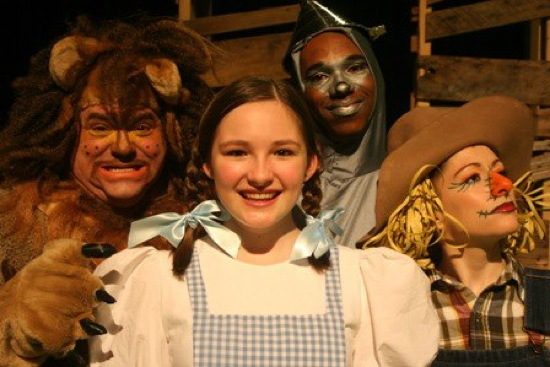 The basics of the traditional story of the Wizard of Oz are still there – Dorothy (a delightful and talented Clare Peyton) is still from Kansas and arrives in Oz via a tornado. There still is a battle between the good witch, Glinda (a funny Courtney Proctor) and bad one, the Wicked Witch of the West (a jaunty Valarie Perez-Schere). Dorothy’s still sets off in her brand new ruby slippers on the road to ask the Wizard to help her get home.  On her way there, she meets the cowardly Lion (a hilarious B. Thomas Rinaldi), who needs courage to be the “King of the Forest;” the brain-deficient Scarecrow (a spry and endearing Kelsey Painter), who is yearning for a brain; and the man made of tin (a joyful-to-watch Derek Cooper), lacking a heart and rusting every time he cries.

…the actors spend almost the same amount of time out interacting with the audience as they do on the stage.

However, the fun twist in this Land of Oz is… all of the children and adults in the audience are the munchkins, and without these unique munchkins, Dorothy and her friends wouldn’t make it to see the Wizard (a clever Bobby Harris). It’s hard to get more interactive than this.  As munchkins in the audience, we get to be trees in the dark forest that hide Dorothy from the Wicked Witch and the directional guides that tell Dorothy and her friends the correct way to get to the Emerald City. A few lucky munchkins even got to oil the Tin Man and re-stuff the Scarecrow!

Director Raine Bode’s choices worked well with the interactive format; the actors spend almost the same amount of time out interacting with the audience as they do on the stage.  Dorothy and her friends do end up getting everything they wanted, and Dorothy is amazed that she had the power to go home the whole time, by clicking her ruby slippers.  At the end of the show, the lighting designer, Adrienne Geiszl, creates a magical effect that had us “munchkins” oohing and ahhing on our way home, too.

Running Time:  One hour with no intermission.

Dorothy and the Wizard of Oz is running through March 24, 2013 at Pumpkin Theatre, performances are at St Timothy’s School, Hannah More Theatre, 8400 Greenspring Avenue.  For tickets call 410-828-1814 or click here.