Theatre Review: ‘Fanny and Alexander’ by the Royal Dramatic Theatre, as part of Nordic Cool 2013 at the Kennedy Center 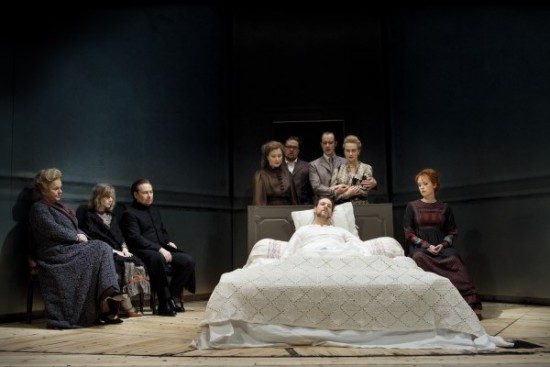 If there was ever a show to remind us of the joys of theatre, and how precious its gifts and its artists truly are, The Royal Dramatic Theatre’s production of Ingmar Bergman’s epic tale Fanny and Alexander is it.  Bergman’s vision of a small-town theatrical family in fin-de-siecle Sweden, by turns loving, bawdy and austere, is fully realized by this pitch-perfect ensemble.   Missing this once-in-a-lifetime opportunity to see an ensemble company at the top of its game would be tragic indeed.

Many of us came of age watching Ingmar Bergman’s classic, brooding films—Wild Strawberries, The Seventh Seal, The Virgin Spring, to name just a few of my own favorites—so it is easy to forget that his first love was the theatre, that “little world” which reflects, refracts and lampoons the bigger world in which we live.  Bergman devoted years as a director at the Royal Dramatic Theatre, occasionally bringing his productions to the US for limited engagements; to my knowledge this is the first time the Washington area has ever had the opportunity to see his company in action.

… one of the greatest plays about the theater ever written.

Originally a 3-hour film Fanny and Alexander follows the fortunes of the Ekdahl family, whose members have the run of the local municipal theatre; the two children of the title grow up performing alongside their father and mother, and live in a huge mansion with a truly motley collection of relatives.  All of the adults have their eccentricities and their flaws, and the eldest boy Alexander (played with cool restraint by Hannes Alin) has grown dimly aware of the infidelities and crises simmering under that broad roof.  Their father regales them at bedtime with fantastical tales, and tries to instill a love of the stage in them even though his own talents are clearly lacking.  To be a good actor requires that one be (as Hume Cronyn once put it) a terrible liar, and it soon becomes clear that Alexander has inherited his father’s talent for impossibly tall tales—sometimes told for fun, but just as often out of spite.

When Fanny and Alexander’s father Oscar (the touchingly humane Thomas Hanzon) dies suddenly, their mother soon grows disenchanted with her life as an actress.  In desperate search for a new role in life, Emilie Ekdahl (the stunning Livia Millhagen) soon makes an impetuous decision to marry the local Bishop and abandon everything and everyone she has ever known.  Her children, resentful from the very start, have no choice but to follow her.

This being Sweden, it should come as no surprise that our Bishop’s residence is so utterly bleak it makes a prison cell look like Monte Carlo.  Alexander’s taste for lies takes a truly nasty, personal turn, and it becomes clear that Emilie has made a terrible mistake.  When she asks for a divorce she finds herself trapped by Bishop Edvard Vergérus (played with dark austerity by Reine Brynolfsson), and he threatens to take the children away, leaving them forever at his mercy.  With Emilie and her children in crisis, the Ekdahls and their extended family contrive an elaborate scheme to rescue them—a scheme by turns hilarious, desperate, and deadly.

The action is framed, appropriately enough, by monologues that reveal why actors have always loved their work; even when a distraught Emilie takes leave of the theatre to marry into the Church, it is clear she carries with her the regret of a lifetime.  These moments are by far the most intimate of the evening, and are deeply moving.

To keep this sprawling play in motion, Director Stefan Larsson sets the production on an ingeniously-designed turntable set by Rufus Didwiszus.  With its off-angled walls and seemingly constant motion not one inch is ever wasted, and Larsson manages to fill this revolving ‘wooden O’ with life even between the walls, with the cast constantly walking through and among the set.  In true theatrical fashion the stage crew is regularly in sight, and for once we get to see their quiet dedication as well.

Star turns are in plentiful supply; Fanny and Alexander’s uncles, Carl and Gustav Adolf, are studies in contrasts, and are plum roles that any actor would kill for.  As the tortured academic, Carl Ekdahl, Christopher Wagelin channels a drunken, insomniac soul that seems torn from one of August Strindberg’s darkest plays.  As the philandering Gustav Adolf, Reuben Sallmander gives the audience its most athletic moments, joyfully courting Maj the nanny (more on her later) and then romancing his wife after hardly skipping a beat; the darkness lurking behind his carefree persona comes out with full force, however, in a truly harrowing confrontation with his brother-in-law the Bishop.

When you have as polished an ensemble as this one, it is hard to choose a single, stand-out performance.   Marie Goranzon anchors the action as the family matriarch, Helen Ekdahl; and her old lover Isak Jacobi, as wily as he is blunt, is vividly portrayed by Hans Klinga.  But the most fascinating, even revelatory performance belongs to Ellen Jelinek, whose shape-shifting abilities are truly astonishing.  One minute she is the gleefully smutty maid Maj, literally busting the bed with Gustav; the next she dons a tacky beret as the insufferably chatty prompter at rehearsal.  Within seconds, she then changes costumes in front of the audience, transforming herself into Maj’s evil twin—the Bishop’s malevolent servant Justina.  And in one of the play’s final scenes she plays Isak’s eerie nephew Ismael, whose ability to read Alexander’s mind and gauge the power of the boy’s hatred, is the most chilling scene of all.

If you are familiar with the film, you will be delighted to find additional touches and details that more fully flesh out the relationships and give the movie’s characters greater depth and complexity.  Bergman continued to work the script, developing it first into a TV series and then a novel, and we can be truly grateful for the time he took to nurture one of the greatest plays about the theater ever written.

Fanny and Alexander has completed is run at the Kennedy Center.  For more on Nordic Cool 2013, running through March 17, click here.