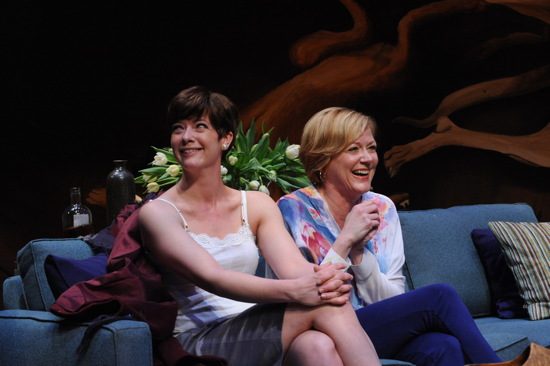 Almost exactly three years ago, I saw this Tony Award-winning play on Broadway with a magnificent cast that included Jeff Daniels, Lucy Lui, Janet McTeer and a brilliant character actor, Dylan Baker. God of Carnage is the second production of Everyman Theatre in its new home and, under the deft direction of Eleanor Holdridge, it did not disappoint.

This is a roller coaster evening of theater not to be missed.

Opening with a stunning set design by Timothy R. Mackabee, the living room is framed with rich, glossy red walls. White tulips sit prominently on a table behind a couch. A large coffee table is piled with art books, there is also a chair, an ottoman and oriental rug round out the set. Presiding over this scene is a jaw-dropping recreation of the painting “Wild Boar Hunt” (by the 16thcentury Flemish painter Frans Snyders), rendered by scenic artist Emily Walsh. It spans the entire back wall of the set. This was a not-so-subtle visual reference to the emotional carnage that is to follow in the next 85 minutes. There are obvious comparisons to Edward Albee’s “Whose Afraid of Virginia Woolf?” — two couples, one evening, alcohol, and bad behavior. But this play by Yasmina Reza has a much lighter touch (there is little sexual tension) though no less poignant. She shows us, with biting wit, what can happen when all social propriety is stripped away and our primitive nature is let loose. 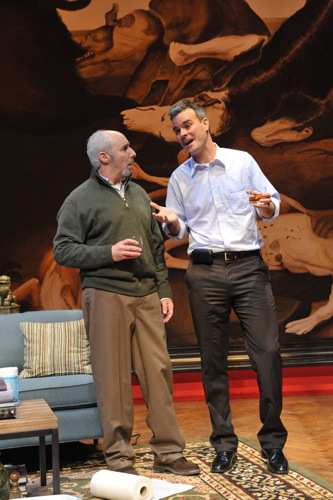 Two upper-middle class couples meet to discuss a fight between their two 11-year-old sons. Alan (Tim Getman), a boorish and ruthless corporate lawyer whose cell phone has become another appendage and his prim, quiet wife Annette (Megan Anderson) have come to the home of Michael (Christopher Block), a hardware salesman, and Veronica (Deborah Hazlett), a liberal writer who works in an art bookstore. Alan and Annette’s son hit Michael and Veronica’s son with a stick and knocked out two of his teeth. They are uncomfortably but politely discussing what to do about apologies and punishment. Subtle accusations about the character of each boy begin to sneak out, particularly with the increasingly exaggerated embellishments by Veronica.

The discussion is constantly being interrupted by Alan’s cell phone and he converses loudly and crudely as if no one else is in the room. Annette becomes so frustrated with her husband’s lack of interest with the situation at hand, she has an explosive, physical reaction. Annette then seems to come to life and shows some true grit. From then on, things get quickly and riotously out of control.

It’s time to break out the rum and we witness the breathtaking changes in alliances and ever-failing attempts to maintain civility. It’s couple vs. couple, men vs. women, woman vs. woman, man vs. man, and husband vs. wife. Michael has one of the more hilarious and shocking transformations as he goes from accommodating husband to a self-described Neanderthal. Now Alan can relate to him. There is hamster-cide, phone-cide and tulips fly.

The entire cast was exemplary and worked like a well-oiled machine not only with the emotional but physical acrobatics required in this production. However, the heart and soul is Deborah Hazlett as Veronica. Veronica is the passionate (and slightly neurotic) standard bearer of civilization. 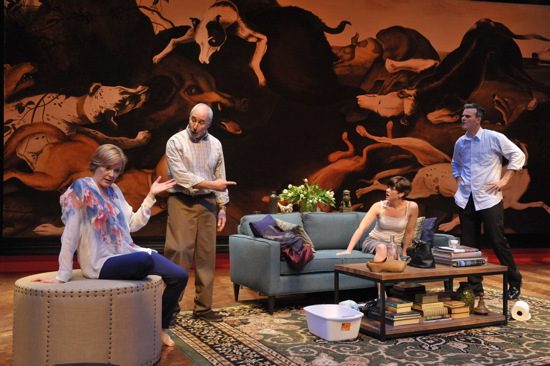 However as the situation deteriorates, even she goes hilariously off the rails, losing the battle with her best instincts. Hazlett gives yet another outstanding performance as she did in August: Osage County and Megan Anderson’s Annette has some more surprises up her sleeve.

Despite the outrageous and childish behavior, in the end you believe that there is hope for these two couples—and civilization as we know it. This is a roller coaster evening of theater not to be missed.