Theatre Review: ‘Jack and the Beanstalk’ at The Puppet Co. Playhouse 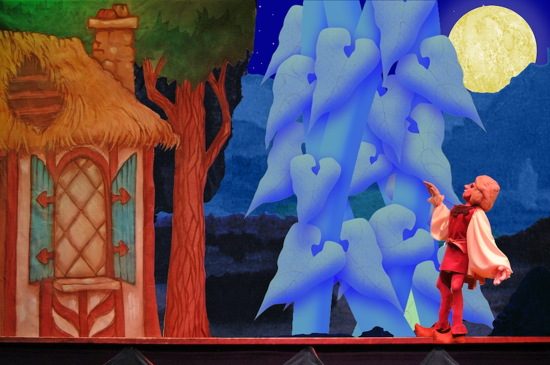 Jack in ‘Jack and the Beanstalk.’
Photo courtesy of The Puppet Co. Playhouse.

The Puppet Co. Playhouse does it again with a sweet adaptation of a classic fairytale.  This time the fairytale is Jack and the Beanstalk with rod puppets and an exciting surprise carnival puppet as the giant.

Jack and his mother are poor, living on a broken-down farm with little to call their own, and Jack spends his time sitting around dreaming of a life of riches and no chores.  Having to do all the work around the farm, Jack’s mother quickly grows tired of his laziness and daydreams, but Jack doesn’t care about how hard his mother must work because he is too caught up in his own unhappiness with his lot in life.  When their only cow, Penelope, stops giving milk, Jack’s mother sends Jack away to take the cow to the butcher.  Without a second thought to their cow’s fate, Jack sets off to the butcher, with much complaining that he must do some work.

The puppets are costumed beautifully, and the changing scenery and the puppetry are delightful.

Along the way, he runs into a man who overhears Jack’s plan to take Penelope to the butcher.  The man takes Penelope and hides.  When Jack finds the man, he trades a bag of beans for Penelope (after a funny scene with an invisibility cloak), pleased that he doesn’t have to go all the way to the butcher. 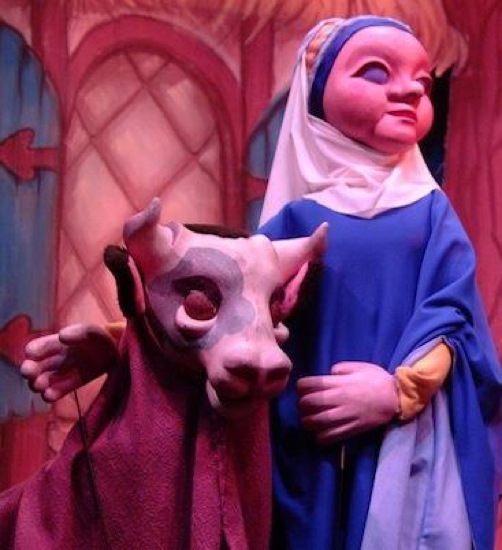 Old Mother Twaddle in ‘Jack and the Beanstalk.’
Photo courtesy of The Puppet Co. Playhouse.

When Jack gets home and shows his mother the bag of beans, she is happy that at least they will have beans to eat for a lifetime, and she tells him to plant four beans.  Overnight, the fourth bean produces a beanstalk that reaches up into the sky, and this is the source of Jack’s adventures.  At the top of the beanstalk, Jack meets some interesting characters and learns that the riches in the pocket doesn’t mean anything next to the riches of the heart.

The puppets are costumed beautifully, and the changing scenery and the puppetry are delightful.  The Puppet Co. designs another great production for kids of all ages!