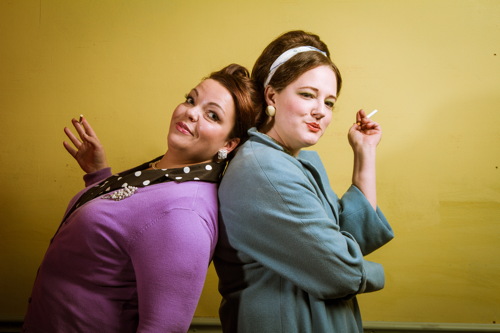 So what does a Canadian play with a French name have to do with Baltimore, hon? Fells Point Corner Theatre has translated Les Belles Soeurs (The Sisters-In-Law) — originally written in 1965 by playwright Michel Tremblay — and given it a Baltimore accent. While Tremblay’s characters were originally taken from family and neighbors he observed growing up in a poor working class neighborhood in Montreal, in this production, they are drawn from the Polish, Italian and Irish working class families of Fells Point in 1963.

In the program, assistant director and dramaturge Kate Bishop explains that this play was revolutionary for throwing a spotlight on subject matter unacceptable in the conservative theater world of the 1960s in Quebec: the everyday lives and struggles of working class women. Tremblay also boldly used the real language of these people — an urban slang, derivative of the “proper” French spoken by the upper class. This was, in reality, political theater cloaked in tragicomedy. Tremblay’s play helped to spark change not only in Quebec’s theatrical landscape but also contributed to what was known as the “Quiet Revolution” when the government overhauled its social and political infrastructures.

The audience will delight in the local flavor of the set…

This is a perfect play to adapt to the lives of 15 Catholic women living in this (still) working class Baltimore neighborhood during the 60s. However, you have to listen carefully to the radio in the opening of the play because it explains why the timeframe was purposefully changed to 1963 —  the eve of the assassination of JFK. This event marked innocence lost for the country and signaled that the United States was on the verge of its own revolution on several fronts: politics, pop culture, civil rights — and the women’s movement. Though thoughtful, the radio portion may be too subtle a device to convey this framework without the notes in the program. 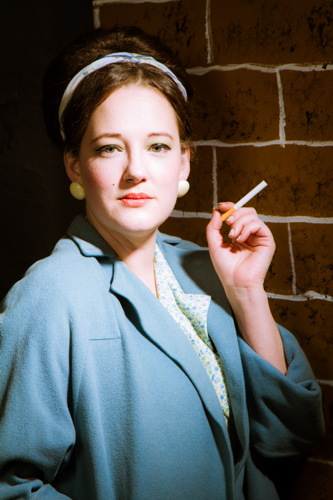 The story centers on Germaine Lankowski (Helenmary Ball), who has just won one million S&H green stamps and invited two of her sisters and so-called friends to a “pasting” party. Green stamps were given to shoppers based on purchases, which could then be redeemed for products listed in a catalog (During the 1960s, the rewards catalog printed by the Sperry & Hutchinson company was the largest publication in the United States and the company issued three times as many stamps as the U.S. Postal Service). Germaine has big dreams of redoing her entire house with these precious stamps. She gloats about her good fortune and is perfectly obnoxious especially when arguing with her combative and loud daughter, Linda (Kelly Cavanaugh).

Like FPCT’s previous production Superior Donuts where the main character steps out of the action and speaks to the audience to reveal his inner thoughts, the women in this play also literally have their turn in the spotlight. A gong is sounded to introduce these moments. Mary Angela Bialecki (Peggy Friedman) is the first to arrive on the scene in her housecoat and curlers. She is jealous and resentful of her neighbor’s good fortune as are all the ladies that parade into Germaine’s kitchen. There is the prim Mary Elizabeth O’Keefe (an excellent Margaret Condon) who, dressed in an outfit reminiscent of Jackie Kennedy, is the more cosmopolitan of the group having traveled abroad. Perky Yvette Lorenzo’s (Terry A. Laurino) world centers around a very large Italian family. Laurino is marvelous when, without missing a beat, recites an exhausting list of names of all the friends and family in attendance at a family birthday party. The single and lonely Blanche Vaccaro (a wonderful Anne Shoemaker) is secretly in love with the traveling brush salesman who comes to her house every month. Then there are Germaine’s sisters —the cranky and bitter Rose Wosniack (Anne Marie Field) and the more even-tempered Gabby Flanagan (Hillary Mazer).

The play also employs the use of a Greek chorus that drives home the desperation and stifling existence these women are experiencing. The first time it is used, five of the women recite the endless monotony of their lives for every day of the week. It is a refrain of housecleaning, making meals, taking care of (often ungrateful) children and husbands (some employed, some not), shopping, hanging out the wash, fighting every night, and watching TV—what they describe as “this stupid, rotten life.”

Literally crashing on the scene is Mary Therese Doyle (a wonderful Holly Gibbs, who employs a spot on “Bawlmer” accent) with her 93-year-old mother-in-law Olive Doyle (Amy Mulvhill) who has just fallen out of her wheelchair – again.  Mary Therese seems to relish her role as the long-suffering caretaker. Empathy for her disappears when she slaps Olive (who barely speaks but acts out by snarling and threatening to bite) into unconsciousness.  This is the method she and her husband employ when Olive “misbehaves.”

These sisters and friends gossip and fight, revealing frustration, anger, resentment, prejudice, ignorance, and petty jealousy towards others and each other. As resentment toward Germaine’s “undeserved” good fortune grows, the women start sneaking the stamps into their purses.

Joining the party are two “old maid” friends just coming from a funeral, Selma Bersesh (Barbara Pinker in a very natural performance) and Angeline Salvatore (Virginia Frank) who has a secret. Then like a strong wind coming through the screen door, the first act ends with the arrival of the Paulette (Kate Shoemaker), the curvy and pretty sister of Germaine, Rose and Gabby. Once the darling of the family, she is persona non grata ever since she fell for Johnny and started working in his club. Even stepping into a club was a mortal sin. To the rest of the women, Paulette is evil incarnate.

Angeline’s secret is revealed at the beginning of the second act. She is forced to choose between her old friend and her new friend. Paulette took Angeline to the club where, for the first time in her life, she found laughter, friendship and happiness. It is a poignant scene when she must resign herself to a colorless, rigid life with Selma or be an outcast. 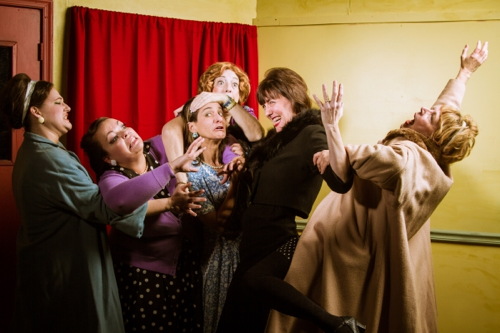 There is an undercurrent of sadness even among the laughs but one wonderfully outrageous moment comes when the entire cast participates in an “Ode to Bingo,” a production number (which runs a tad long) dedicated to the joys of Bingo – the holy grail, the bright light in their drab lives – even if the prize is an ashtray floor lamp.

The last two women in the group are Linda’s young friends, Lisa (Emily Sucher), a Catholic schoolgirl “in trouble” and Ginny (Rachel Reckling). Lisa breaks your heart as does Ginny, the child who feels the pain and isolation of being least favored child in her family.

Despite putting up a good front, all is not well with Paulette and she has come to her sister’s party to try to reconnect with her family. It is the “fallen women,” Paulette and Angeline, who garner the most sympathy because they dared to break away and take a chance on happiness.

The audience will delight in the local flavor of the set – the screen door showcasing the 100-year-old Baltimore art form of screen painting, the row house covered in Formstone and the wonderfully tacky kitchen items that can now be found in local antique shops. The dialogue is sprinkled with references to beloved icons from the past such as Johnny Unitas and the Colts, Woolworth’s, Channel 13’s legendary Jerry Turner and Hecht’s.

Led by Director Richard Barber, along with Bishop, the detail and thoughtfulness of how the entire production team put Baltimore’s stamp on this play works very well. Despite the monumental changes that have taken place since the 60s, the play still feels current. With the political, social and economic events of the past few years — the burden of rising health and education costs, debt, unemployment, elder care, government gridlock, and the continuing debate over woman’s rights — perhaps we are in need of a “Quiet Revolution.”