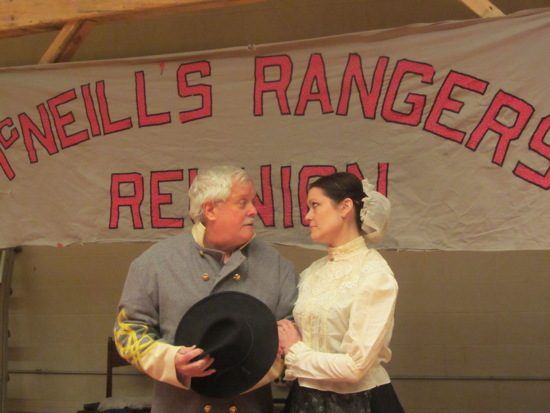 Today, they would be called terrorists.  Then, in the 1860s, they were called heroes.  McNeill’s Rangers, a production by Potomac State College and in association with Apple Alley Players, chronicles the bravery and passion of a partisan Confederate battalion functioning in the foothills of West Virginia.  Due to the nature of the unit, they did not receive protection or support from the Confederate army, but their disruptive guerilla tactics proved to be invaluable during the Civil War.

McNeill’s Rangers, written by Vana Neva Nespor, is set 25 years after the end of the war at a reunion for the rangers and their families.  Old war stories are told pageant-style with singing and dancing, as well as tearful reminiscing.  It is through these stories that the audience learns of John McNeill and his group of rangers, and their contribution to the war efforts.

Audiences should expect a sweet story full of courageous acts…

Hunter Martin, as Jesse McNeill, and his wife, Sarah McNeill (Kourtni High), host the reunion and temper the wounded pride of the rangers’ families when they discover that Sarah invited Union soldiers in an attempt to “forgive and forget.”  Martin and High play a charming young couple, complete with the tender duet, “It’s Time I Was a Bride.”

Ron Growden plays John McNeill, father of Jesse and leader of the rangers.  Growden brings his character to life with dignity and wit, proving to be a charismatic leader.  Danise Whitlock plays Jemimah McNeill, John McNeill’s resilient and devoted wife.  Whitlock acts with a sense of grace and quiet beauty that complements Growden’s strong role.  The two share several meaningful moments, highlighting the painful reality that was life during the Civil War.

Other memorable characters include Tom Vogtman as Uncle Dan, an irascible old man who is still living the war, Janice Clem as Gerty Dailey who spends her time wrangling her philandering husband, and Larry Myers as Otis Dailey, the wily, yet henpecked husband.  Rounding out the cast and representing all dialects of West Virginian English is a strong ensemble of men, women, and children who share in the singing, dancing, and story-telling. 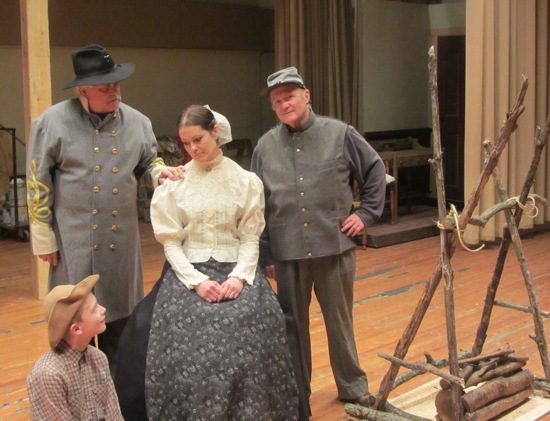 In what turns out to be the most stunning performance of the show, Kevin Shreve (as Union Captain Saunders) wows the audience with his tragic ballad, “The Drummer Boy of Shiloh.” Shreve has the distinction of being one of the cast members that has also performed in the original production 30 years ago.

The music was written by local resident and head of the music department at Potomac State College, Dr. John Hawkins, who led an orchestra full of authentic Appalachian instruments.  Prior to the show, the orchestra plays a selection of blue grass music and it is worth arriving early just to hear this exceptional group.

This show is directed by Tom Valentine and choreographed by Kim Rowley.  Danise Whitlock and Laurie Clem designed the costumes – They payed special attention to the socio-economic distinctions between Northerners and Southerners.  The set was designed and constructed by Foreman David Miller and Scenic Artist Jill Baldinger.

McNeill’s Ranger’s does have a happy ending – or, as happy an ending that can be after such loss and suffering.  After fondly recalling and sharing memories (and learning that those darn Yankees do respect them), the Rangers’ families are ready to find some common ground, broaden their horizons, and move beyond the war.  Audiences should expect a sweet story full of courageous acts – both on the battlefield and at home – and a war tale that is about people instead of politics.