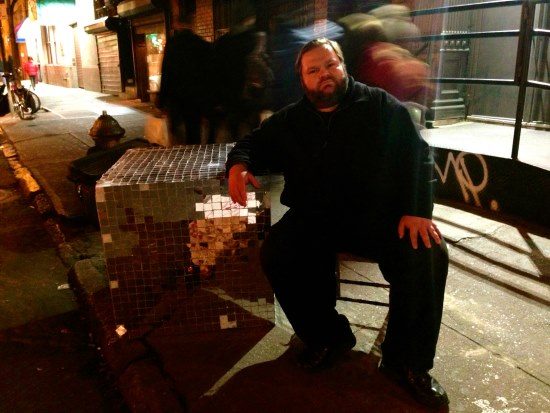 American Utopias, Mike Daisey’s new monologue now playing at Woolly Mammoth Theatre, in one sense puts forward the following proposition: what if we were to remove the walls from the Woolly Mammoth building, taking away all the architecture that creates a private, exclusive, and safe space for performance, and make those artistic expressions of revolution (the theme of Woolly’s current season) viewable to a larger public?  You might respond: ‘You mean, like Street Theatre of the 1960s?’  Or because Daisey is a monologuist: ‘You mean, like some kind of Soap Box Theatre—circa whenever?”

In some sense, my answer would be “yes!” But in another sense—”no!”

For, in American Utopias Mike Daisey offers us our yearnings, as in our Jungian archetypal collective unconscious yearnings, for something more than a new theatrical experience to help us pass the time, or to help us feel hip or even like a part of the post postmodern avant garde.  Instead, he offers us our desire for a paradise on earth, but not a paradise of vestal virgins, White Knights, or lutes in C-minor; rather, a paradise of human relations, where our interactions with others are no longer channeled through commerce, propaganda, or—ironically—Mike Daisey monologues.  That yearning we have is for simple humane action-response exchanges with other earthlings.

…a glorious, thoroughly engaging, ever conflating romp through and outside the bubble

In this sense American Utopias is a brilliant failure, for it yearns for what it can never deliver or become: a revolutionary act. Yet, it is a brilliant failure most worthy of witness, if for no other reason than it will put your bourgeois Self into a box and then dare you to find a way to get out of it.

Oh, yes, American Utopias and its performance artist are also most definitely wonderfully funny, which is just what our totalitarian “Jumbo” commercialism ordered.

The utopias Daisey describes and explores are “Burning Man,” Disney’s “Magic Kingdom” and its spawn, Occupy Wall Street, and the aforementioned contemporary American (bourgeois by default) theatre.  If at this point I were to ask “which ‘utopia’ does not belong in this monologue?” you might answer: “I guess you mean that dystopic rat-infested campout of the 99% held at New York City’s Zuccotti Park in 2011, which unfortunately gave new meaning to the word ‘occupy’.” And you would be right, except for one important distinction.  Disney’s “Magic Kingdom,” which Daisey points out was supposed to be a magic, if corporate-owned city until Mr. Disney’s untimely death before groundbreaking, and “Burning Man,” that yearly soulfest of miraculous happenings in the Black Rock Desert of Nevada, are both defined by their class limitations, i.e., only those with the cash, time, and inclination can enter their respective “heavens.”  Occupy Wall Street, though benefiting from a private-public partnership (Zuccotti Park) like the two previously mentioned utopias, placed no restrictions on participation, other than personal inclination.  The human relations inspired by the Occupy Movement world wide—a set of relationships built on the oh-so-uninspired-act of “hanging out” and “being” with one another—form the utopic center of what it means to occupy. 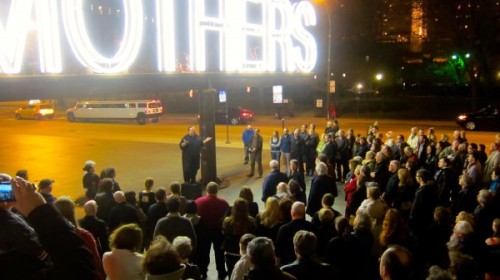 You will notice that I left the America theatre out of this discussion.  That’s because the monologuist Daisey has found our theatrical enterprise wanting.  With “Burning Man” he experienced a theatrical event of a life time, a memory seared not only into his unconscious but into the fabric of those closest two dozen or so strangers with whom he spent that week.  With the “Magic Kingdom,” he found wonder not in the Disney mise en scene inspired by Prague but in its spawn, a yearly family-gathering or party with theme and theatre.  And why were these “parties” worthy of repeated visits?  Because like “Burning Man,” they successfully created human relations that reached beyond the commercially, politically networked world we have come to call home.

With theatre, however, no such ripple of utopia exists, at least not within or among those members of the audience not immediately participating in the creation of the theatrical event.  For those of us who put down our cash to buy a ticket (or for those like myself who do not have to put down any cash and still get a ticket), we do not participate in the creation of the theatrical event; thus, we are nothing more than voyeurs to the happenings on the stage.  From our seats, we can watch passively as empires rise and people fall without even a twinge of joy or guilt.

Daisey does not like that passive arrangement.  He wants more than anything to make us participants in his theatrical enterprise, or as Brazilian theatre artist and author of The Theatre of the Oppressed Augusto Boal wrote: “Spect-actors.”  Such a desire is worthy of the stage, particularly of a stage that continues to grow ever more removed from the socio-economic forces driving our nation.   And, as I mentioned earlier, he both succeeds and fails: to expect anything more from such a noble attempt, would be both naïve and foolhardy.  The point is to risk the ridiculous in order to achieve even a moment of nobility.  And that Daisey does, and does wonderfully.

A number of people collaborated with Daisey on the creation of this semi- paratheatrical event: Woolly Mammoth’s production staff to be sure, most notably the Production Stage Manager Kate Kilbane, and the event’s Director Jean-Michele Gregory and Set & Lighting Designer Klyph Stanford; and hats are off to Dramaturg Miriam Weisfeld whomone can only assume helped keep the delicate weave of Utopias intact.  And one must also acknowledge both the knowing participation of Daisey’s family in these raucous good times as well as the unknowing participation of several detoxing children at the “Magic Kingdom” and one “oboe” sounding woman at “Burning Man,” as well as several hundred occupiers whose presence, though absent, was nonetheless essential to the event’s videographic success (what would theatre be without at least 60 seconds of video).

Of course, the list of collaborators would not be complete without a special acknowledgement to those audience members who stayed with the show even after its apparent end.  We ventured forth into “dorky” land.  Without that experience one might very well wonder: what has happened to Mike Daisey?

Any attempt to puncture the bubble that is “American Culture” is a worthwhile enterprise.  Mike Daisey’s offering,American Utopias, is a glorious, thoroughly engaging, ever conflating romp through and outside the bubble, with a popping conclusion.

Running Time: 2 hours and 15 engaging minutes, without an intermission.