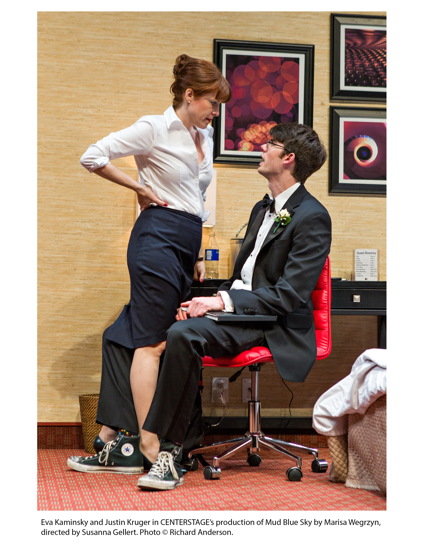 Mud Blue Sky, currently in its world premiere at Centerstage, is hands down one of the most nuanced, coherent shows to come out of Baltimore this season. On the surface, it sounds like a bizarre premise–three flight attendants and a teenage boy in a rented tux and Chuck Taylors wind up spending prom night in a hotel room near Chicago’s O’Hare Airport. But what results from this peculiar mixture is an authentic look at the way people live, and the merits of a simple act of kindness.

Neil Patel’s set design lends an air of credibility to the play before it even starts. We are greeted (in proscenium form) with a basic, but minutely detailed hotel room–the perfectly made bed with the duvet, the chair straight out of the 1960s, the emergency information on the back of the front door. The set even has a small, visible bathroom. Before the show starts, a projection displays videos of black and white airplanes against the beige walls, complete with ambient sounds of airplane noise. In the foreground, gravel creates the setting for the outdoor scenes.

…it’s entertaining, magnificently cast, funny and poignant; in short, all the things necessary for a great night at the theatre.

The play itself by Marisa Wegrzyn is remarkably witty. The aforementioned bizarre premise actually makes an odd sort of sense–Beth (Susan Rome) is a flight attendant on an overnight layover in Chicago who blows off her friends, fellow flight attendant Sam (Eva Kaminsky) and former 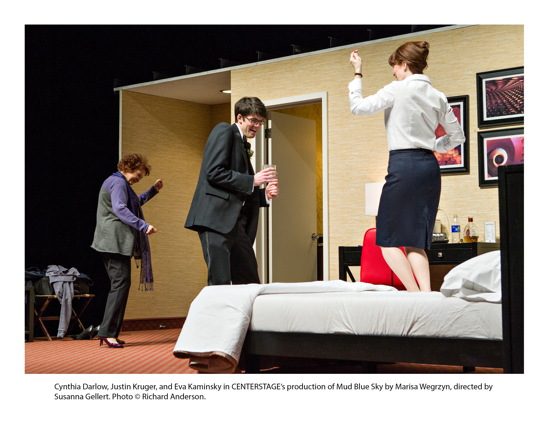 flight attendant Angie (Cynthia Darlow), to hit up her adolescent pot connection Jonathan (Justin Kruger) who happens to be coming from prom. Rome and Kruger have an excellent rapport, in part highlighted by Kruger’s painfully accurate portrayal of awkward adolescence. Kaminsky’s turn as the selfish and wildly funny Sam is a stark counterpoint to Rome’s somewhat low key portrayal, and Darlow’s monologue regarding human kindness around Christmas was extremely moving.

Director Susanna Gellert certainly hit the ball out of the park with this one–it’s entertaining, magnificently cast, funny and poignant; in short, all the things necessary for a great night at the theatre.

Advisory: Contains strong language, sexually suggestive images and use of illegal substances. It is not appropriate for those under the age of 15.