Theatre Review: ‘Proof’ by Peter’s Alley Theatre Productions at Theatre on the Run 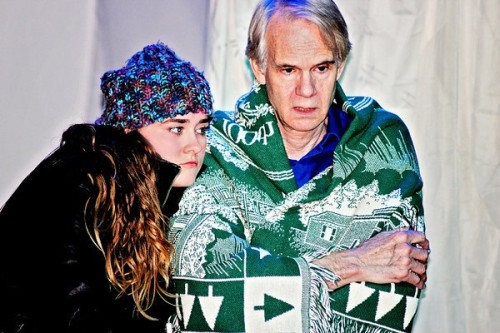 Since at least the publication of Sylvia Nasar’s unofficial biography of Nobel Economist John Nash, A Beautiful Mind (and the film it inspired, starring Russell Crowe), mathematical genius and madness have been yoked together in the popular imagination.  A few years before Nasar, Tom Stoppard’s play Arcadia used unique form of time-travel and synchronicity to explore—among other things—the challenges traditionally faced by women who engage in what remains a stereotypically male field.

David Auburn’s Proof skillfully combines these themes, albeit with a more amiable “Mad Maths” professor and a more volatile but still mathematically-inclined daughter.  Peter’s Alley Theatre Productions has created a wonderfully personal, intimate staging of Auburn’s play in Arlington’s Theatre on the Run, well worth the twists and turns you have to take to get there. 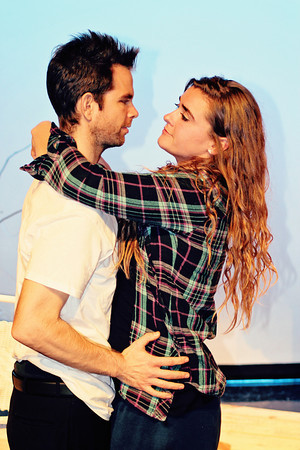 The action centers on Catherine, the gifted daughter of a recently-deceased math genius, whose 25th birthday apparently coincides with her father’s funeral.  (The age of 25 takes on a huge significance here.)  Auburn plays with the audience in the opening dialogue, a father-daughter conversation, and it dawns on us very slowly that Catherine (performed by Ashley San in affecting, yet edgy style) is only imagining this encounter with the mad old man.  The tension between reality and madness, as well as the immense challenges of proving things with any mathematical precision (we are treated to narrated proofs and formulae between scenes), dominate much of this 2-hour drama.

Catherine’s depressed, delusional solitudes are broken by two characters, both of whom care for her but to very different purposes:  there’s her helicopter-sibling Claire, a New York sophisticate who flies in to sell the family home and assume control Catherine’s future in ominous ways.  As played here by Peter’s Alley’s Artistic Director, Aly B. Ettman, Claire’s need for dominance is crystal clear, her impatience with the facts painfully obvious, and this gives the lie to any pieties Claire expresses about caring for anyone on stage except for herself.  Audience members who confuse care with control are in for a very unpleasant surprise, as Ettman throws up the mirror and shows their characters wanting.

…well worth the twists and turns you have to take to get there.

Meanwhile, Hal (the charming Matt Baughman), a protégé of Catherine’s father, spends his days poring over the professor’s old notebooks—the legacy of his years of decline and madness—in hopes of discovering a glimmer of the old genius.  Much of the tension in Proof revolves around Hal and Catherine’s relationship; and the discovery of an amazing proof in a carefully-kept notebook triggers one of the most bitter confrontations in the play.  Trust, it seems, is in as short a supply as proof.

Auburn’s dialogue builds slowly, and the audience is taken on trips back and forth in time in order to get a fuller picture of the characters and their complex relationships.   San and Baughman manage their trip back in time, as Catherine and Hal, amusing grace—the encounter of awestruck grad student and professor’s daughter is thoroughly enjoyable (and all too familiar).  And Bob Chaves rounds out this solid cast with a quiet, affecting portrait of madness—a reminder that “mad” doesn’t always have to mean “angry,” and that sometimes the most unsettling thoughts lurk in outwardly serene people. 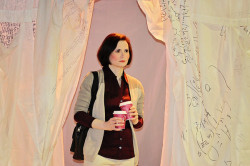 Aly B. Ettman as Claire. Photo by McCall Doyle Photography.

The set is designed by cast member Ashley San, which seems appropriate in that this is her character’s home we’re talking about; random mathematical graffiti litter the furniture and even the torn curtains which serve, in a make-shift way, as the home’s exterior.  Peter Caress’ lighting design navigates the complex psychology and timelines of each scene admirably.  The only false note (to my ear) was in the pre-show music, which is all Chicago blues—great fun in its way, but it sets the wrong tone for a play devoted to more heady pursuits.

Proof plays at Theatre on the Run,3700 S. Four Mile Run Drive, through March 30.  For information or tickets click here.