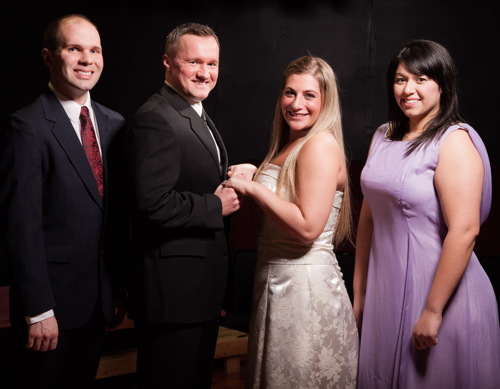 The Last Five Years, now playing at Spotlighters Theatre, is more of a song cycle than a musical but its organization does not deflect from its emotionally raw and occasionally devastating content. The story, told almost entirely through song, follows the relationship of struggling actress Cathy (Norma Gomez) and novelist Jaime (Bart Debicki) through five years of love and hardship. Though the musical is about these two people, the actors seldom directly interact, as Cathy’s timeline goes from the end of their relationship to just after their first date, while Jaime’s starts just after their first date and ends with him leaving. The only time they connect face to face is at their wedding, where both are equally happy, dancing together, but which the dramatic irony makes a terribly bittersweet moment.

The set was very well done, a certain minimalism aiding the production significantly–Spotlighters’ arena setup occasionally creates sight-line difficulties, but as two of four corners were taken by musicians, the ability to see everything was pretty much universal. Most of the action takes place either in Cathy and Jaime’s apartment or some outside location, so the posts are adorned with both wall sconces and external lamps. On the far wall, near a door marked 4D, apartment mailboxes are painted, though a large painting of an antique clock disrupts the normality of the image. A rift runs down the middle of the floor, as though assigning each actor to his or her own timeline. Lighting designer Pete Vargo created a seamless set of spotlights to clarify what could potentially be some very confusing staging.

It is a moving tale of love and loss and frustrated ambition, and well worth seeing.

Jason Robert Brown’s music requires a dexterity of voice, a sense of humor, and an appreciation of tragic irony, all of which are more than adequately presented by the small cast. Gomez’s voice is beautiful and delicate, with perfect enunciation, well-matched with Debicki’s clarity and enthusiasm. Standouts include “See I’m Smiling,” Cathy’s last attempt to repair her marriage, and “The Schmuel Song,” Jaime’s impromptu Christmas gift about a Russian tailor who dreams of the perfect dress, and time. As the play progresses, the actors’ skillful portrayal of the characters’ simultaneous rise and decline makes the contrast especially poignant.

The one drawback of a live accompaniment to a musical where no actors are miked is that sound becomes an issue. Namely, every time Gomez slipped into head voice (which the role frequently demanded), she became almost inaudible. Likewise, when Debecki hit lower notes, he became difficult to hear. While I appreciate the boldness of the approach, and musical director Kevin Roland did a fine job, the small space ensured that the live music frequently overpowered the performers.

All in all, director Fuzz Roark has a lot to be proud of in this production. This is a unique story deftly presented in a truly unique space, and every emotive chord of The Last Five Years’ sometimes devastating arc is struck with almost brutal accuracy. It is a moving tale of love and loss and frustrated ambition, and well worth seeing.