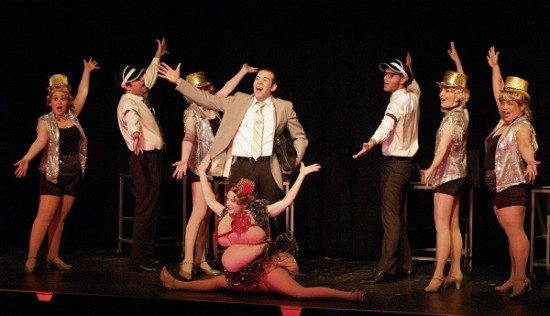 Leo (Brian Sackett) and the Chorus Girls of ‘The Producers.’ Photo by Steve Tyler.

Directing in Howard County and the Baltimore/DC area since 1973, Mo Dutterer has announced that The Producers will most likely be the last show that he directs.  In a statement on Facebook, Mr. Dutterer said, “The Producers will most likely be the last show I direct. I am still going to stay on with Silhouette Stages as President as long as they will have me, but hope to get back to acting more. 40 years is a long time to stay active in directing. My dad told me to ‘Never say Never,’ but this is most likely it. And what a great show to end on. I hope you can come see it.”

If you like Mel Brooks, traditional Broadway-sounding songs, zany characters, and a fun story, then this is the show for you!

While the orchestra is scaled down from 23 musicians that were used in the original Broadway production to just 4, the pit sounded complete in the small space, thanks to musical director Michael Tan.  All four musicians played their hearts out, including Michael Tan on the Keyboard, Melissa Chalmer on the reeds, Gregory Bell on the bass, and Jeffry Glass on the drums.

The live musicians never overpowered the actors.  Credit goes to sound technician Ethan Hogarty who mixed a near-flawless show.  Besides the good mix, the wireless microphones were tuned so well that I did not hear a single ounce of feedback, which is unusual in any production, let alone a community theatre.  I should also note that I was sitting in the very back row of the theatre and yet I heard every word just fine. 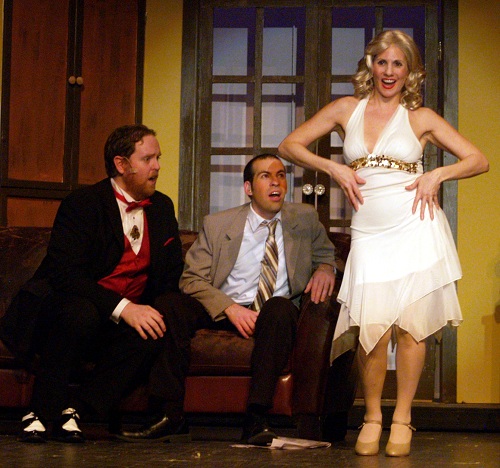 Ryan’s large stature and pushy personality makes him a good choice as the selfish and greedy producer.  To be picky, however, Ryan seems a bit young to be playing a has-been Broadway producer.  Nonetheless, Ryan next to Brian’s thin body and meek personality makes for a good comedic pair.

Brian is endearing as the mousey, nervous and fearful accountant.  He is particularly funny when pacing around the stage during his panic attacks and cute when he calms down, holding his blue security blanket like Linus from Peanuts.  Vocally, he is also strong, as showcased in “That Face” and “I Wanna Be a Producer” among other gems.

Leo Bloom’s love interest, Ulla is played by an attractive Rachel Weir.  Her solo song, “When You’ve Got It, Flaunt It” was a tough sell considering she bounced a lot from a strained head voice to chest voice, implying that the song was either out of her register or she was sick.  This was particularly glaring when Ulla says, ” Now Ullla Belt” and instead she then sings lightly in her head voice.  Still, Rachel was pretty, did a passable Swedish accent, and had nice chemistry between her and Brian.

Matt Scheer is a natural as Franz Liebkind, the former Nazi who has penned an admiring musical tribute to Adolf Hitler, titled Springtime for Hitler. His talent for comedy is highlighted in the song,  “Der Guten Tag Hop-Clop.” 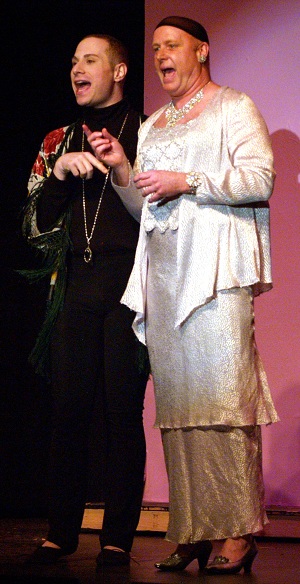 Rick Robertson does an outstanding job as Roger DeBris, the flamboyant theatre director, described by Max Bialystock as the worst director to have ever lived, and was chosen by Bialystock in an attempt to ensure that Liebkind’s Springtime for Hitler would flop.  Though Rick’s performance is practically a carbon-copy of Gary Beach’s Broadway and film performance, there is no question that Rick was a laugh-out-loud riot!

Before even knowing the cast list for Silhouette Stages production of The Producers, I immediately had Kevin James Logan cast in my mind as Carmen Ghia, Roger DeBris’ common-law assistant.  Sure enough, Kevin was cast as Carmen in a role that seems custom-tailored for him.  He was a joy to watch whenever he was on stage.  Kevin is a good singer and was also able to keep his character voice intact during all musical numbers, including “Keep It Gay.”

The ensemble was used nicely in “Along Came Bialy”  where little old ladies dance in perfect sync using walkers to tap to the rhythm of the song choreographed by Tina Marie DeSimone.  Tina even included a move made famous by the NYC Rockettes, when they all form a straight line and fall slowly back to back like a deck of cards.

Overall, Silhouette Stages presents an entertaining staging of The Producers.  If you like Mel Brooks, traditional Broadway-sounding songs, zany characters, and a fun story, then this is the show for you!

If this truly is Mo Dutterer’s last show directing, then you will surely not want to miss this production!  As for me, I am hoping that Mr. Dutterer will have a special encore presentation and direct once more!

Running Time: Approximately 2 hours and 40 minutes with one intermission.

Advisory:  Some strong language and some adult humor.

The Producers plays through March 10, 2013 at The Slayton House Theatre — Wilde Lake Village Center – 10400 Cross Fox Lane, in Columbia, MD. Tickets are available for purchase at the door, or online.