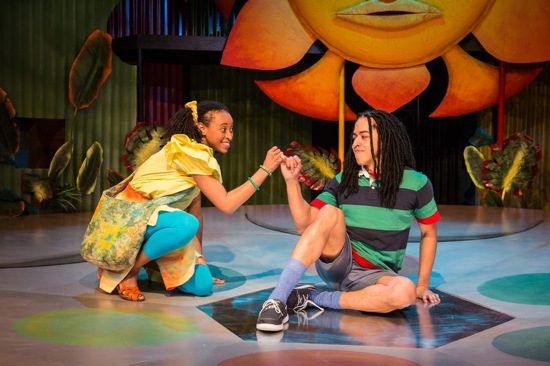 Brittany Williams as Nansi and Jobari Parker-Namdar as Ziggy.
Photo by Michael Horan.

What play mesmerizes, tantalizes, and revitalizes you as it whisks you away on a warm and sweet ocean breeze?  Adventure Theatre MTC’s production of Three Little Birds does!  Playwright Michael Bobbitt and Director Nick Olcott have brought to life this superb Jamaican adventure based on the story by Cedella Marley and inspired by the music of her father, the iconic Reggae musician Bob Marley.

‘Three Little Birds’ is another Adventure Theatre MTC production that makes one feel honored to be a member of the audience.

The show begins with an eleven-year-old boy, Ziggy (played by an adult, Jobari Parker-Namdar, who is adorable and perfect as a boy with a Jamaican accent).  Ziggy just won’t turn off the television and start living his life, despite the insistence of his mother (a delightful Ayanna Hardy), his young friend Nansi (a marvelous Brittany N. Williams) and his best friend, a colorful playful bird named Dr. Bird (a charming David Little).  Ziggy is afraid of what waits for him outside his door, there could be a hurricane, large birds and even evil spirits! 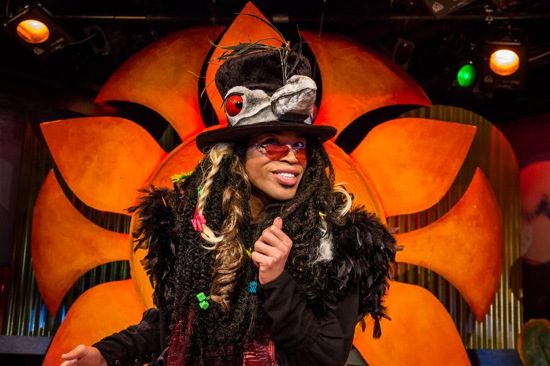 Nansi reminds Ziggy that, with three little birds outside his door (Ayanna Hardy, David Little and an appealing Tara Yates-Reeves), the world can’t be that bad.  They lead the cast in singing Bob Marley’s  “Three Little Birds,”  which relates perfectly to Ziggy and tells him not to worry because everything will be okay.

“Rise up this mornin’,

Smiled with the risin’ sun,

Perch by my doorstep

Of melodies pure and true…”

Ziggy does venture out of his house. He and Nansi run into a few problems, their biggest one being the notorious Duppy, the Jamaican equivalent of the American Boogie Man.   Ziggy’s Duppy (the exceptionally talented S. Lewis Feemster) is an evil spirit in a form of a big black bird in search of locks of hair he can steal from unsuspecting children, and Ziggy just happens to have beautiful long hair styled in dreadlocks.  Duppy wants nothing more than to add Ziggy’s dreadlocks to the collection of blond, brown and curly sections of other children’s hair he wears on his own head.  With a little luck and a lot of love, Ziggy overcomes his fears and defeats the Duppy.

Set designer Jos B. Musumeci also stayed true to the inspired spirit of Bob Marley’s songs, from a radiant, giant, yellow sun puppet that smiles, frowns and even sticks its tongue out, to the set walls painted in all the colors of the Jamaican flag. 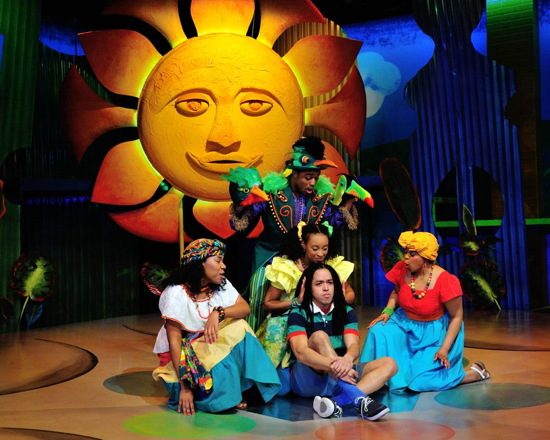 Three Little Birds is another Adventure Theatre MTC production that makes one feel honored to be a member of the audience.  I don’t think I can put into words how lucky we are that we have such phenomenal local talent available for all of us to enjoy.  Some things can only be expressed in song.

I highly recommend this show!

Running Time:  55 minutes without an intermission.

“One Love, One Heart,

Let’s get together and feel all right.

As it was in the beginning (One Love),

So shall it be in the end (One Heart).

Give thanks and praise to the Lord, and I will feel all right.”