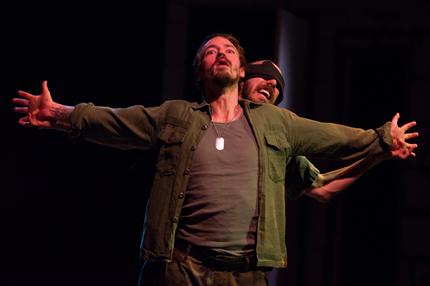 When you set out to review any performance inspired by Orson Welles’ notorious “Voodoo Macbeth,” discretion is the better part of valor.  Staged in Harlem in 1936 and featuring a huge cast of African, Haitian, and African-American performers, Welles re-imagined Shakesepeare’s Dark Scot as a 19th Century Haitian tyrant driven by Voodoo priestesses instead of witches.  One critic, Percy Hammond, trashed the production only to die suddenly just days after his review was published.  (Coincidence?  We’re not about to touch that one.)

…an eclectic mix of pistol fire and medieval-style combat, post-Catholic, Wiccan-like ritual stirred in with a gallon or three of stage blood…

Then you have the unpleasant case of a theatre critic who, as a very young actor, was once pointed out as Exhibit A in how “never” to do Shakespeare.  That, dear reader, would be me.  And unlike Hammond, the critic in question went on to have a long and fruitful career.  (Ouch.  I did get much better at it, though.  Or so folks tell me …)

I make these points because even if I were to take issue with Kathleen Akerley’s post-modern adaptation of Welles’ script here—just supposing, mind you, purely hypothetical—it would behoove me to do so very, very discreetly.

The “Audience Guide” for American Century Theater’s current production, prepared by Artistic Director Jack Marshall, is a must-read for anyone interested in seeing this unique take on the Bard’s darkest drama.  Marshall reminds us that Orson Welles, more famous in our day for his film Citizen Kane, was notoriously inconsistent as an artist with an undiagnosed case of Attention Deficit Disorder (as it were) whose directing style was more chaos than plan.  That he had a hit with his Haitian concept and toured the country with it may have been as much the result of serendipity as anything else. 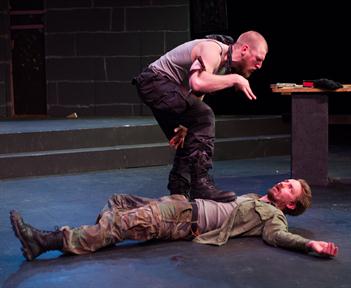 Will Hayes as Hecate, Joe Carlson as Macbeth.
Photo by Johannes Markus.

Marshall frames director Acklerley’s work here wisely, because although American Century specializes in revivals of neglected American plays, what we have here is an homage to Welles’ rebellious artistic spirit, not a re-staging of his script.  And in Akerley, Welles has certainly met his match.  Welles thought the witches were old-hat, searched for a modern equivalent and found Voodoo; Akerley shares Welles’ aversion to witches, but ventures into a not-too-distant future when Christianity has begun to give way to  neo-paganism.  Her “Voodoo Macbeth” centers on a company of American servicemen (men only, by the way) stationed in a futuristic Scotland that, stained-glass or no, looks a good bit more like Iraq or Afghanistan.  Christians all, they have begun to “go native” and have adopted a truly disturbing set of new rituals (bloodletting, necromancy, etc.) to complement the old ones they brought with them.  The most controversial scenes here occur when the cast seamlessly combines Christian and anti-Christian practices.  Their ensemble chant, touching in any other context, has a truly surreal effect.

The result is an eclectic mix of pistol fire and medieval-style combat, post-Catholic, Wiccan-like ritual stirred in with a gallon or three of stage blood, topped with a garnish of Latin Chant and snatches of the King James Bible, all to go with the main course of Shakespearean verse.   If the preceding menu intrigues you, by all means go; if it leaves you confused, however, perhaps you’re better off with Netflix.  This “Voodoo Macbeth” will frustrate audiences accustomed to clear story lines and traditional takes on the classics. I myself found it utterly incomprehensible at points, but it might inspire the more adventurous among us, for whom the classics are no good without a healthy dose of deconstruction.  As a story, this production fails; as a meditation on the story’s darker, more universal meanings, it is more successful.

Joe Carlson’s performance as Macbeth, in a sense, contains within it the virtues and drawbacks of the show.  Visceral and compelling, he still occasionally drops his voice so that we run the risk of losing his thoughts, his intentions being clear enough.Perhaps the most extreme of Akerley’s many artistic choices is the replacement of Lady Macbeth by Gruoch, the post-apocalyptic equivalent of Welles’ Voodoo priesthood, who is also Macbeth’s bosom buddy (played by Matt Dewberry).  Since many productions choose to portray Lady Mac as a witch, there is some justification to having Dewberry begin the show with a ritual designed to induce an ecstatic state in three of his fellow servicemen (‘weird brothers,’ in this instance).  What’s puzzling, however, is the decision to retain the gender-specific language of Lady Macbeth; it is hard to fathom what Gruoch has in mind when he asks the gods to “unsex me here” and even more incongruous when he talks about giving suck to a baby.  Famous as these lines may be, once you cast a male you have removed the main reason for including them, since they depict one woman’s desire to move beyond the passive, nurturing role assigned to her by Medieval Scottish society. 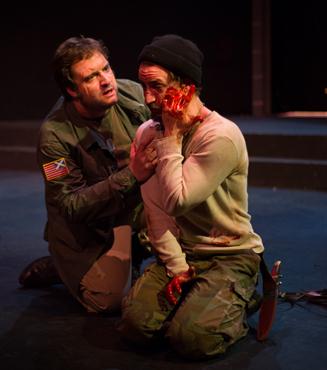 Akerley has assembled a solid production team here; Frank DiSalvo Jr.’s sound design combines the ominous with the natural, veering on cue between metallic noise and clear-throated songbirds, while Jason Aufdem-Brinke’s intricate lighting navigates the many moods and scenes with ease.  And since Macbeth simply can’t be Macbeth without a fight, it is good to see Casey Kaleba hard at work here, choreographing a variety of combat sequences to match the often oddly-matched weaponry, ranging from Japanese katanas to Renaissance daggers.  Meanwhile, Akerley’s set combines the raw and the mystical, with some sequences taking place behind a screen in slow motion, adding to the eeriness of it all.

In addition to Dewberry, standout performers include Frank Britton’s Banquo, Theodore M. Snead’s Duncan, and William Hayes’ tall, brawny Hecate—a character often neglected even in more traditional productions.  Hayes makes a male Hecate’s presence more natural than you might imagine; his furtive body-snatching and sampling is one of the most appropriately creepy aspects of this production.  A shout-out too for James Miller (whose reviews you have seen on this website), who as Ross adds a healthy dose of edginess to the atmosphere.

Having performed Shakespeare myself, and having thoroughly mangled it at first, I have sympathy for members of the cast whose delivery was inconsistent or who were not up to the verse.  I will pass over them in silence, and simply state that a vocal coach is essential for word-heavy productions like this one.  With Shakespeare especially, the ability of the performer to enunciate clearly, to fill the room with his voice, and mean every word he says, is as important as his ability to emote.

One last word about the concept:  the process that Welles began and Akerley continued is one of using Shakespeare as a platform upon which to build a different play, albeit on similar and recognizable themes.  American Century’s Voodoo Macbeth may represent a sort of halfway point between the adaptation of one play and the genesis of another.  Ms. Akerley has a solid track record as a playwright, and I wouldn’t be surprised if the seeds of this production germinate into something original down the line.

Running Time:  2  hours and thirty minutes with an intermission.