1. Peter Pan at The Lyric

Audiences are invited to discover the magic of the two-time Emmy Award winning and two-time Tony® Award nominated production: Cathy Rigby is PETER PAN! Families and fans have their chance to ‘fly’ into the the Lyric for this magical production.

Synopsis: Peter Pan is a unique, family friendly attraction of spectacle and fantasy. The thrill of flying, timeless magical moments and a captivating hook will mesmerize young and old alike. The legend you thought you know, is now the adventure you never dreamed possible…Cathy Rigby is PETER PAN! 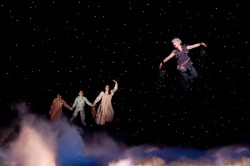 2. Fiddler on the Roof at Toby’s Dinner Theatre of Columbia

“Fiddler on the Roof at Toby’s is theatre at its best.” -Steve Charing, MD Theatre Guide

Synopsis:  Rich in historical and ethnic detail, Fiddler on the Roof  has touched audiences around the world with its humor, warmth and honesty. The universal theme of tradition cuts across barriers of race, class, nationality and religion, leaving audiences crying tears of laughter, joy and sadness. Songs loved the world over include: “Sunrise, Sunset,” “If I Were a Rich Man,” and “Matchmaker.” 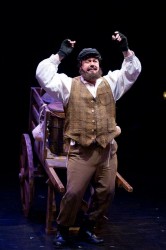 “…it’s entertaining, magnificently cast, funny and poignant; in short, all the things necessary for a great night at the theatre.” -Morgan Halvorsen, MD Theatre Guide

Synopsis: Work, motherhood, missed connections, and prom night form the backdrop for Marisa Wegrzyn’s tender, funny new play. In a nondescript hotel room near O’Hare Airport, three flight attendants and an unlikely fourth companion poise on the brink of looking back and moving ahead. 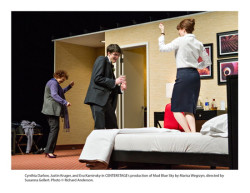 “Three Little Birds is another Adventure Theatre MTC production that makes one feel honored to be a member of the audience.” -April Forrer, MD Theatre Guide

Synopsis: Ah…yasso nice! Three little birds sing their sweet songs to Ziggy, a very shy child who is happy to see the world from the T.V. in his room. But his tricky friend, Nansi wants him to get out and enjoy the Island of Jamaica. But, Ziggy is afraid of hurricane, mongoose and evil spirits. Their worldly adventure is enlivened by the fantastic songs of renowned Reggae artist, Bob Marley. Roots, Rock, Reggae! 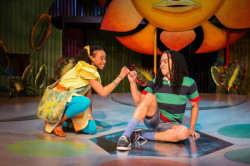 Brittany Williams as Nansi and Jobari Parker-Namdar as Ziggy.
Photo by Michael Horan.

Five Broadway stars recreate finest moments from the greatest musicals of the century.

Synopsis: All new show! Direct from New York, 101 Years of Broadway recreates the finest moments from the greatest musicals of the century featuring five of the actual stars from hit shows such as Jersey Boys, South Pacific, and Phantom of the Opera and Broadway classics from such composers as Jerome Kern, Rodgers and Hammerstein, Kander and Ebb, Cole Porter, Stephen Sondheim, Andrew Lloyd Webber and more. 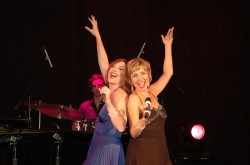