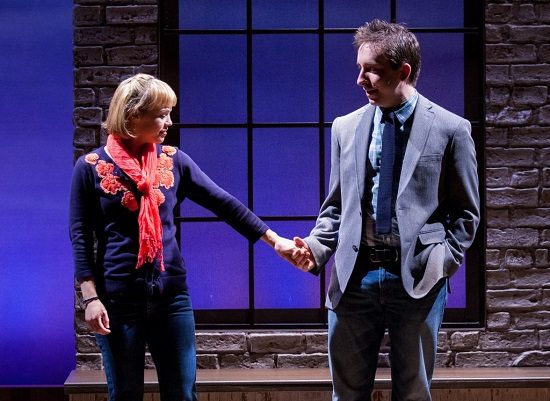 Jason Robert Brown’s two character chamber musical The Last Five Years is one of those shows that is not performed a whole lot professionally. One reason for this is that if the show is not cast well it’s a very long 80 minutes. Signature Theatre does not have this problem with their production; in fact, there is pretty much nothing at all wrong with this production. It gives us two stellar performances by Erin Weaver and James Gardiner and equally great staging by Aaron Posner, plus the added bonus of hearing JRB’s original orchestrations with the orchestra under the direction of William Yanesh.

The Last Five Years is very loosely based on Brown’s marriage to his first wife. Jamie (James Gardiner) is a book writer about to get his first big publishing deal. He meets Cathy (Erin Weaver), an actress whose career isn’t going anywhere fast. They marry and, while Jamie’s career starts to pick up, Cathy is only being cast in summer stock in Ohio and becomes jealous of Jamie’s success. With Brown’s perfect score the story of the couple starts to unfold as their relationship starts to unravel.

Jason Robert Brown is a true genius of the musical theatre and this show is a prime example. First off is his knack for capturing his characters in song. “Shiksa Goddess” talks about a Jewish guy falling in love with a non-Jewish women and the trouble it causes with family members.

“If you had a tattoo, that wouldn’t matter
If you had a shaved head, that would be cool
If you came from Spain or Japan
Or the back of a van
Just as long as you’re not from Hebrew school
I’d say, “Now I’m getting somewhere!
I’m finally breaking through!”
I’d say, “Hey! Hey! Shiksa goddess!
I’ve been waiting for someone like you”

Lyrics like those are what’s known as brilliant lyric writing. 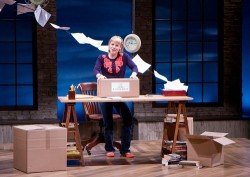 Secondly, JRB is an excellent orchestrator and unfortunately a lot of people aren’t aware of this. Here the show is scored for a chamber orchestra consisting of piano, violin, two cellos, guitar and bass. There is no percussion but the piano part is written in such a way that you don’t miss it at all. Again, this is what makes him a genius.

Performance wise this is a well acted and really well sung production. A few highlights include Weaver’s “I’m a Part of That” and the more comedic “A Summer in Ohio,” which talks about Cathy sharing the stage with a midget playing Tevye and Porgy at a summer stock theatre in the same season. Gardiner’s powerful voice comes shining through with what might be the best version of “If I Didn’t Believe in You” I have ever heard.  On the lighter side his “Shiksa Goddess” was a definite crowd pleaser as was “The Schmuel Song” which is a story song about the Tailor of Klimovich. Just think, “Shiksa Goddess” was almost the song my wife Jen and I had sung at our wedding. You will be happy to know we did not but man, we were close. Then we have the duets in the show. My personal favorite is “The Next Ten Minutes” where Jamie proposes to Cathy. Weaver and Gardiner have the perfect chemistry onstage and those two voices blend so beautifully on JRB’s rich score.

Aaron Posner’s direction keeps the acting flowing seamlessly without pretention. Posner shows with The Last Five Years that he is very capable of musical staging. His choreographic moves add just enough to the action without detracting from the material and, because Posner understands the show so well, the entire evening just flies by. 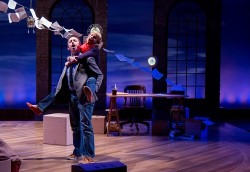 The production elements enhance Posner’s vision and the two fine performances. Daniel Conway’s set includes a funnel like structure strummed with manuscript pages and many clocks. His abstract yet fully realized apt setting is functional and does not over shadow the chamber like feel of the show. Andrew F. Griffin turns in another fantastic lighting design and Matt Rowe’s sound design is perfect with just the right amount of enhancement.

William Yanesh has no small feat playing JRB’s killer piano part but Yanesh does do a yeoman’s job as do the rest of the musicians. They are Doug Dube (Violin), Aron Rider and Deb Brudvig (Cellos), Gerry Kunkel (Guitar) and Chris Chlumsky (Bass).

Signature Theatre’s The Last Five Years is a must see. Between Weaver and Gardiner’s performances with Posner guiding them and JRB’s score and orchestration with great production values, this is a show that is done the way it is meant to be done.