Theatre Review: ‘9 to 5: The Musical’ by Arlington Players at Thomas Jefferson Community Center 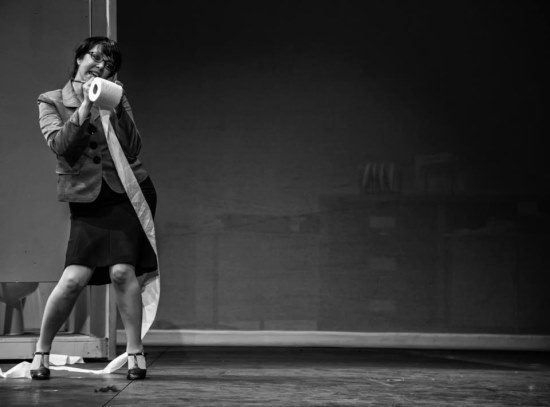 Times change.  And then again, they don’t.  Think we’ve seen the last of that cave-dwelling, lecherous boss so brilliantly played on-screen by Dabney Coleman?  Guess again; he still stalks the halls of Congress, using the latest technology to expose and impose himself on any female staffer unfortunate enough to be on his Contact list.  The head of the CIA has an affair with a too-solicitous biographer, and we even had that small firestorm over the President’s remarks about a certain Attorney General—sheesh, enough already.  Can’t we guys just grow up?

…a fun evening out for adults young and old.

Since it’s obvious that menfolk still have a lot to learn, and since flat-out ridicule is often the best medicine, the Arlington Players’ new production of 9 to 5:  The Musical could be a great way to let off all that work-related steam.  With Dolly Parton’s memorable songs and a clever book by Patricia Resnick (chock full of hilarious time-capsule references to the 1970s), the show manages to remain relevant even as the technology at the heart of the plot recedes into horse-and-buggy land.  It’s adult material to be sure (best not to bring the wee ones, who are likely to tug at your sleeve with embarrassing questions). 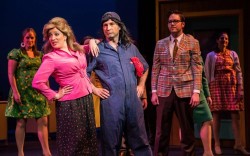 To appreciate how well this musical is put together you might begin with a brief visit (via Netflix) to the original movie 9 to 5, released in 1979 and starring Dolly Parton, Jane Fonda and Lily Tomlin as a trio of frustrated office-workers with big dreams.  Perhaps it’s a little disturbing to realize how little men have matured since the days of leisure suits and Lilly Pulitzer skirts—then again, like the Troglodyte males of the species, the colorful Pulitzer skirts are still with us.

Director John K. Monnett has assembled three strong leads, and a convincing cad of a guy, to carry this production through its 2 ½ hour course.  Although the show drags a bit at times (it’s one of the pitfalls of the Broadway formula), Jennifer Lambert lights up the whole theatre with her take on Doralee Rhodes, the big-busted secretary created by Dolly Parton.  Lambert’s impersonation of one of Country music’s biggest stars is spot-on, and well worth the visit.  Elizabeth Yeats grows from strength to strength as Violet Newstead, the bright assistant passed over (time and again) for promotion, whose office coup leads to reforms that were truly radical for their time.  Monnett and his staff pull out all the stops in Violet’s Tommy Tune-inspired apotheosis, complete with white swallow-tails and an adoring tux-clad male chorus.  Meanwhile Allison Block shines as the newly-divorced, technologically-challenged Judy Bernly; her rendition of “Get Out and Stay Out,” Parton’s great kiss-off of philandering men, is an absolute show-stopper.  A deceptively mousy, conniving Annie Ermlick clearly relishes the role of Roz Keith, the office snitch who embraces her inner witch and reminds us that not all the women in the office are so pure of heart. 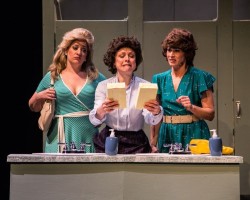 Because the women are such a strong presence here, it’s easy to forget that the supporting male cast is essential to the formula.  Russell Kopp has some big shoes to fill as the leering boss Franklin Hart Jr. (yes, puns on that name abound throughout the show), but he embraces his inner goat and shamelessly prowls and gropes his way through the office.  Hart’s opposite is the shy but sincere Joe, who longs to make the widowed Violet happy; as played by Derek Pickens, he provides a much-needed change of pace and  a reminder that not all of us are jerks.  (No, really.)

Among other pluses, Laura Fontaine makes an auspicious debut here as the show’s costume designer.  She has found the right contrasts in color and style for her leads and pays attention to period office dress (perhaps she took notes on all those tacky plaid suits in Ben Affleck’s “Argo”?).  A personal favorite was her take on the revenge fantasies that close Act I:  a wicked send-up of Martha Graham’s famous ballet sequence in “Oklahoma,” the dope-induced hallucinations of our three heroines run from Fosse’s “Chicago” to a Texas Rodeo to a twisted Fairy-Tale Kingdom with a roaming moose and Violet in a pitch-perfect Snow White gown.

This 9 to 5 is a fun evening out for adults young and old.

Running Time:  2 hours and 30 minutes with an intermission.

Advisory: not for children.