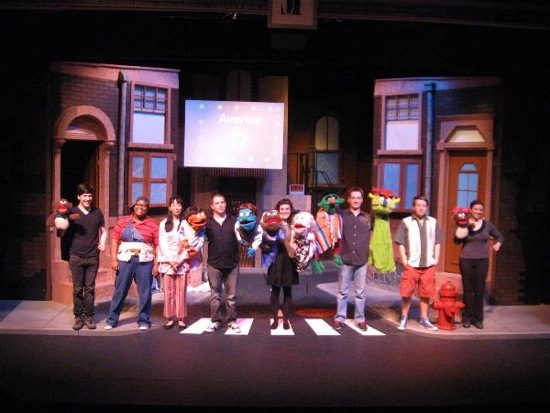 The cast of ‘Avenue Q.’
Photo by Cumberland Theatre.

Former disciples of Sesame Street, prepare to be traumatized!  Avenue Q at Cumberland Theatre is a shockingly funny satire of the realities young adults face when they grow up to realize they’re not as special as their parents told them.  Real life hits hard and most of us aren’t prepared for it.  Avenue Q takes these observations, puts them to song, and uses Jim Henson-style puppets to make the whole life experience a little less painful.  Twenty-somethings will find some solace in such songs as “What Do You Do with a B.A. in English?” and “It Sucks To Be Me.”

Set in a run-down neighborhood in Manhattan, a group of friends discover that life isn’t the oyster it was promised to be by certain educational television programs.  Faced with a rough job market, student debt, and a general lack of purpose, the gang sings their way through missed opportunities, enlightenments, and – of course – sexual deviance.  Through their discoveries, they learn that things are just fine “For Now” – a lesson we can all stand to learn.

Adults with a sense of humor will enjoy the two hour musical performance.

The story is told by both humans and puppets, with a little suspension of disbelief needed to get used to the visible puppeteers.  However, it was obvious in their body language that the puppetry was well-rehearsed.  The puppets were designed and created by Rhett Wolford.  Overall direction and staging was done by Don Whisted.  Whisted was assisted in the set production by Randy Means.  The familiar “city block” set was exceptionally good, depicting a good study of perspective and an economy of space.

The best performances of the night were given by Rhett Wolford as Princeton and Rod, and Shea-Mikal Green as Kate Monster and Lucy.  Wolford opened the show and carried the story as Princeton struggled with his purpose and as Rod struggled with his sexuality.  He deftly moved from character to character.  Green skillfully maneuvered her puppets with grace and her effortless voice brought a sweetness and serious tone to an otherwise hilarious evening.

Randy Means proved his comedic chops by playing both Trekkie Monster, the porn-addicted recluse, and Nicky, the overly helpful roommate.  Momo Nakamura played Christmas Eve, a racist Japanese therapist married to Brian, a cake decorator turned comedian, in search of a permanent job, who was played by Josh Ruppenkamp.  Nakamura and Ruppenkamp gave a gritty portrayal of young married life and the quest for a good career. 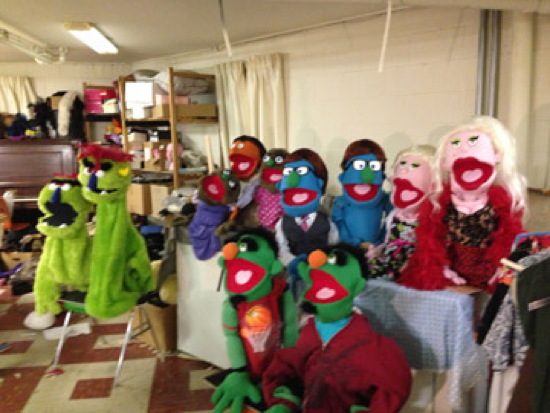 The puppets in ‘Avenue Q.’
Photo by Cumberland Theatre.

Kai B. White played Gary Coleman – which is exactly who you think it is: childhood star turned superintendent of a run-down apartment building.  White brought the audience to tears with her rendition of “You Can Be as Loud as the Hell You Want (When You’re Makin’ Love).”

Angela Merrithew amused as the grouchy Mrs. Thistletwat, assisted with supporting puppetry, and added her strong and clear voice to the ensemble numbers.  Danny Durr rounded out the group as a Bad Idea Bear.

The music was pre-recorded by Chris McCabe.  While it was full and vibrant, it lacked the depth of live music.  It does prove challenging for the actors, as recorded music shows no mercy for missed cues, but the performers did a fine job in keeping up.

It cannot be stressed enough that Avenue Q is not for children, with tough topics such as racism, pornography, and full-puppet nudity being put to music and proudly displayed.  Adults with a sense of humor will enjoy the two hour musical performance.  The mixed-media artwork of Kaitlyn Warton may be viewed in the gallery during the 15-minute intermission.

Advisory: This show is not for children.