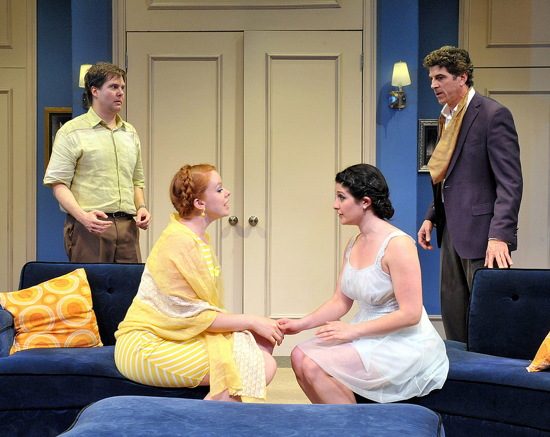 If you’re looking for a breath of fresh air after a winter of somber drama, look no further than Rep Stage’s production of Boeing Boeing. A lively cast drives this bedroom comedy of errors with kinetic energy. It’s one whole shebang of a farce, too— complete with slamming doors, mistaken identities, and outrageous foreign accents.

Rep Stage’s production of Boeing Boeing is the modern version from the 2008 Broadway revival, not the 1960 original. Despite its suggestive premise, the lowbrow humor and innuendo of many modern comedies is blissfully absent. The story concerns Bernard, an American architect with a serious case of Peter Pan playboy syndrome. He is engaged to three airhostesses: one American, one Italian, and one German. He proudly refers to the women as his “international harem.” He manages his affairs with the help of an airline timetable and his maid, Berthe. Enter Progress: the invention of a faster airplane brings his mistresses to his flat at the same time. A surprise visit from his boyhood friend Robert might complicate matters, but Robert reveals himself as more than capable of juggling three suspicious female guests.

‘Boeing Boeing’s’ characters are ridiculous, and logic dictates that you ought to resent Bernard for being such a lout, but a dose of good-natured humor makes the production as refreshing as a glass of champagne.

The pacing is a little slow out of the gate, but once the expository details are established, the action clips right along toward the inevitable collision. The actors keep the stakes high, but lives are not at stake, here—it’s only romance, after all. Surprise arrivals and changes of plans promise more laughs, and each additional complication adds to the hilarity.

The characters are shallow and self-centered, but they are funnier for it. The actors throw themselves head first into the realm of caricature. Allison Leigh Corke plays Bernard’s domineering German mistress, Gretchen, with a mix of toughness and feminine grace. Kelsea Edgerly plays the passionate Italian mistress Gabrielle, and is the most relatable of the three. She seems to be the only of Bernard’s paramours capable of backing him into a corner. Molly Cahill Govern plays the modern-minded American mistress, Gloria. 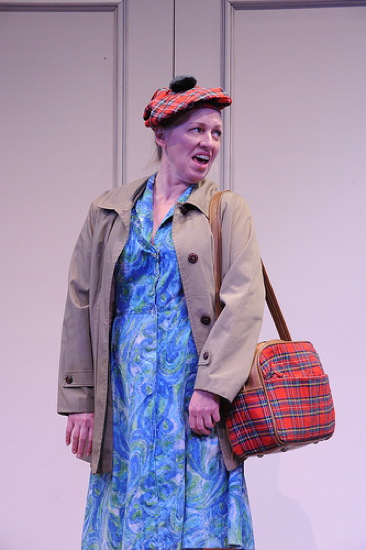 While her performance is appropriately big and bold, she tends to upstage the other characters with dramatic flourishes. Nanna Ingvarsson plays Bernard’s French maid, Berthe, with sardonic wit and nuanced humor to offset the airhostesses’ collective perkiness.

James Whalen plays the loutish-but-lovable Bernard. Whalen is a strong physical presence, but he wisely lets the chaos happen around him and never upstages the other actors. It becomes clear by the second act that without his timetables and careful planning, Bernard is just as hapless as he is dashing. Paul Edward Hope is the real star of the show as Robert. Hope brings dexterity to his corn-fed character, leaping over set pieces and throwing himself in front of doors in a tireless effort to maintain Bernard’s reputation. He invites the audience to share in Robert’s bewilderment at his newfound ability to think on his feet.

A striking set design by Daniel Ettinger features furniture and décor with 1960’s nostalgia in primary colors that reflects the characters’ bold personalities. The characters themselves are primary colors, loveable because they lack depth, but the metaphor doesn’t come out and slap you on the face. The light design by Jason Arnold is subtle and incidental for the most part, but makes itself known on rare occasions. The costumes by Jennifer Tardiff Beall are as bold and colorful as the set. However, the women seem to be consistently barelegged, which strikes the eye as inauthentic to the period. (I admit— if my biggest complaint about a production is that the women aren’t wearing appropriate undergarments, it must be a solid show.)

Boeing Boeing’s characters are ridiculous, and logic dictates that you ought to resent Bernard for being such a lout, but a dose of good-natured humor makes the production as refreshing as a glass of champagne. There is an underlying message that technology only complicates human affairs, but the play is by no means bogged down by ideology. So take a Saturday night and buy a ticket for Boeing Boeing— you can always catch up on the latest episode of Mad Men next week.

Boeing Boeing runs through May 5, 2013 at the Smith Theatre at the Horowitz Center, Howard Community College, 10901 Little Patuxent Parkway, Columbia MD. For tickets, call the box office at (443) 518-1500 or click here.