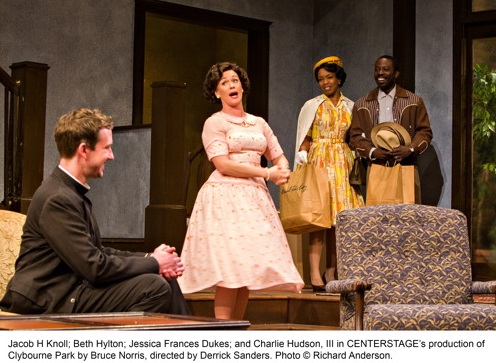 Before I begin, I should say that it is almost impossible to describe the success of this production without revealing its major theatrical conceit. Those of you who are unfamiliar with the plot may wish to remain so and, in that case, I encourage you to stop reading here and go buy your tickets to Centerstage’s wonderful production of Clybourne Park.

…it is a deeply personal loss that transcends ethnic boundaries and gives voice to what community really means.

Bruce Norris’ Tony Award and Pulitzer Prize-winning play bookends another American masterpiece; acts one and two occur immediately before and many years after Lorraine Hansberry’s A Raisin in the Sun, tracing the path of the family home and its surroundings through the urban upheaval and racial conflicts of the twentieth century.  In doing so, the two parts resonate with and reflect each other; the anxieties of integration—a black family moving into a white neighborhood—are later mirrored by those of gentrification—a white family tearing down both the house and the history that is, sometimes literally, buried therein. 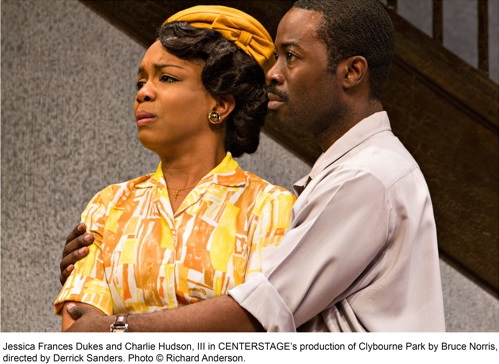 The first act gets off to a somewhat uneven start; Jonathan Crombie crafts a solid comic bit as the detached husband, Russ, but by definition only contributes the occasional—and often random—piece of information. The weight of the scene then falls on Beth Hylton, whose performance as Bev starts out in the equally familiar trope of the frantically bored 1950’s housewife. Thankfully, all this picks up—in both nuance and momentum—with a brilliant series of entrances (followed, in Albert’s case {Charlie Hudson, III}, by a side-splitting false exit). Indeed, one of the great strengths of this production is that, despite the accumulation of bigots, victims, and subtext, it never shies away from Norris’ biting sense of humor. Make no mistake, this is a very funny play, and director Derrick Sanders executes it as such with clever precision.

Visually, the piece gives the impression of being lit by practical (onstage) and natural light, but the design (Thom Weaver) stands out in the closing, isolated tableaus of each act. The realist set (Jack Magaw) is surprisingly versatile and has a lovely sense of depth—a poignant gesture to the outside world—while the costumes (Reggie Ray) and sound design (Elisheba Ittoop) are both wonderfully period-specific (an important asset for a play set in one location and two disparate time frames). 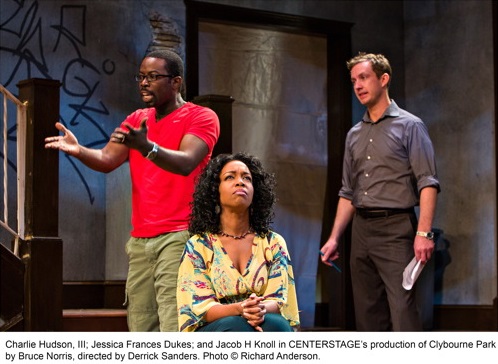 One of the suggestions of the piece seems to be that, while situations change—from neighborhoods to politics—human beings tend to stay the same.  Though each ensemble member takes on a new character in the second act, they unknowingly begin repeating themselves and each other, all without ever really listening, and much to the delight of the audience. The exception to this is Crombie, whose second act character is radically and impressively distinct. The entire cast deserves praise, and I’ll give it: highlights include Hudson’s comic timing, Francine/Lena’s (Jessica Dukes) slow burn of conflict-avoidant energy, Jenna Sokolowski’s startling and brilliant portrayal of a deaf, pregnant housewife, Jacob Knoll’s awkward, clerical enthusiasm, and both of James Ludwig’s well-intentioned but clearly misguided characters (the unspoken refusal of the former, Karl, to share the couch with Francine—he interrogates her from his perch on the arm—is absolutely chilling). Lastly, the subplot of Russ and Bev’s deceased son, and the anger and desperation that Hylton and Crombie bring to it onstage, gives the play a smart and heart-wrenching through-line – it is a deeply personal loss that transcends ethnic boundaries and gives voice to what community really means.