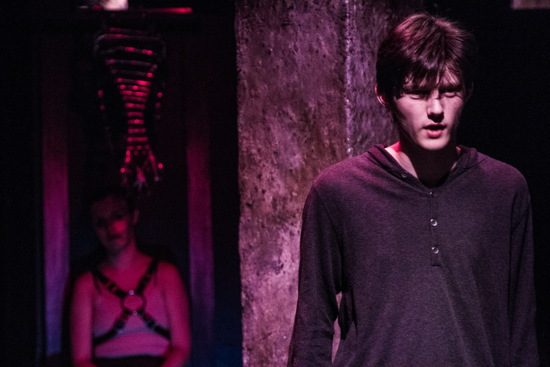 Spotlighters’ production of Peter Shaffer’s Equus takes a firing-on-all-cylinders approach to a play with inherent subtlety. Rather than employ a sensibility of understatement, this version goes for hyperbole. The director steers the production toward spectacle, but a cast of committed actors ground the play in reality.

A drama that explores the nature of madness is a bold choice for a season when many theaters are loading up a cheery spring musical. Shaffer’s 1973 classic concerns the case of Alan Strang, a seventeen-year-old boy who blinds five horses. Martin Dysart is the psychologist assigned to his case and through the course of the play struggles to explain Alan’s compulsions as well as his own. Shaffer’s language is both imagistic and savage. The play is marvelously complex, raising questions about religion, sexuality, family dysfunction, and individuality. It is one of those “thinking plays” whose meaning differs according to each person in the audience.

Is it worth seeing? Absolutely.

Spotlighters’ intimate in-the-round setting provides a basis for a claustrophobic atmosphere that serves the play, if handled with dexterity. Director Sherrionne Brown fills the small space with every one of the thirteen actors, who surround the stage for each scene. It is unclear whether this is a poorly realized attempt at a metatheatrical statement (actors-as-audience members, perhaps?), or if it is merely an oversight. Intentional or otherwise, the effect distracts from the action on the primary playing space. That primary playing space, however, is where the lack of focus becomes the most apparent. The onstage characters seem to share a neurotic tendency of pacing the stage and circling each other like vultures. Moments of stillness that might lend meaning to so much movement are virtually nonexistent. Each scene moves continuously back and forth through time, but it is often unclear which actor belongs in what time zone. 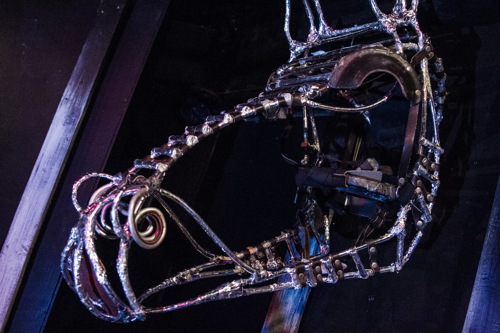 The ironic result of so much movement and scattered focus is that the play loses its complexity, and becomes too easy to understand. While there is value in playing the subtext, the characters project their inner thoughts with Shakespearean displays of emotion, leaving little to the imagination and undermining the build in suspense.

This is not to say that the actors are one-note or fail to bring depth to their characters. The problem is that the actors must fight against so much extraneous movement and embellishment that they seem to be acting for a stage much larger than the one they inhabit.

The play hinges on the relationship between Doctor Dysart and Alan Strang (Phil Gallagher and Thomas Bowers, respectively), and Gallagher and Bowers are superb in their interactions. Gallagher plays the neurotic, theory-spouting aspects of Dysart best, but allows the audience a few glimpses into the manipulative aspects of Dysart’s personality. Bowers is captivating as Alan Strang, and walks a fine line between gentleness and violence, transforming Alan from a mere unusual boy to a savage devotee who worships his horse god with cult-like reverence. Other notable performances include Kathryn Falcone, who plays Alan’s mother Dora. Falcone brings a welcome sense of grounding to the chaos. Kerry Brady, who plays Alan’s potential paramour, Jill, is grounded and present in every moment. 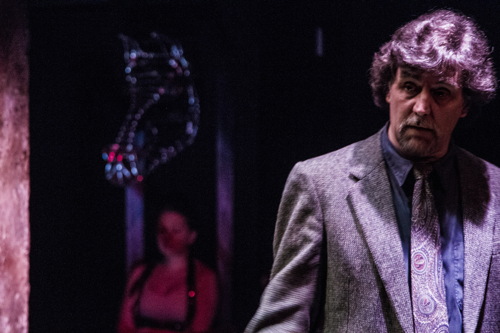 Brad J. Ranno’s sound design is effective and subtle. The preshow and interstitial music, a brooding chorus of string instruments, evokes a quiet night on the English countryside with a hint of danger. Sherrionne Brown’s tendency toward spectacle is effective in what can only be called a “dream horse ballet.” It’s actually much cooler than it sounds. Five metalwork horse heads loom over each corner of the stage, and later transform five actors into the horses Alan maims. With the metal heads on their shoulders, standing on hoof-stilts, the five actors (Ruta Douglas Smith, Megan Farber, Kevin Gordon, and Alani Harris, who also choreographed) circle and stomp around Alan as he worships them, reminiscent of ancient midnight rituals. The movement is underscored by the hissing and humming of offstage actors, which veers the sequence into the realm of amateur experimental productions, but it’s hard not to share Alan’s sense of awe, staring up at magnificent metal horses.

A play so complex and challenging requires one thing of its production team— trust. Some elements of this production attempt to embellish Shaffer’s genius rather than allow it to flourish on its own. Does the style border on self-indulgent? Yes. Is it difficult to think with so much happening onstage? Yes. Is it worth seeing? Absolutely. Staunch minimalists may find the style over-stimulating, but sincere performances from the actors redeem the production.

Advisory: Contains strong language and nudity, no one under the age of 16 is admitted without an accompanying adult.