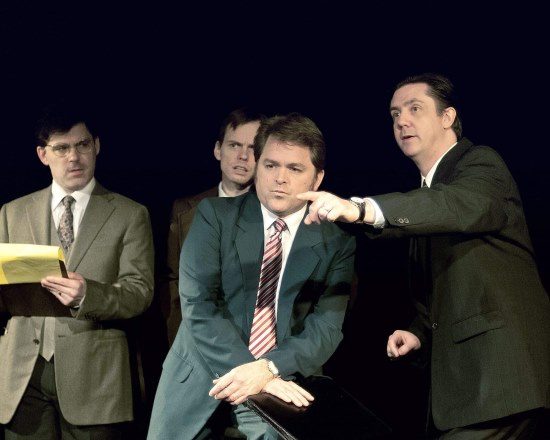 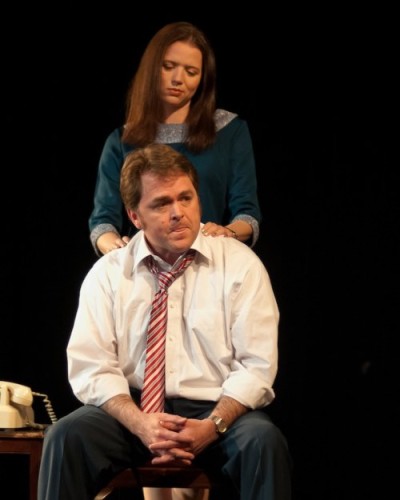 What Frost / Nixon proves most, however, is that story, conflict, character, theme enacted without hype will never be trumped, no matter how much glitter or glitz or glam falls from the rafters.

Now, one might say: “But Mr. Oliver, you are over 50 and remember who this Nixon fellow was, and you probably remember the historical interviews upon which the play is based.”  And, of course, that would be true, though the interviews are very vague in my memory; but I do have recollections of British talk show host David Frost, and I know who Chairman Mao was, and his wife, and the Cold War, and the Vietnam War, and Watergate.  Heck, I even know who Secretary General Brezhnev was.  Does that give me, or anyone with a historical memory, a leg up on this show?  It couldn’t hurt, in the same way knowing something about English history might help with a Shakespeare play.  But is it necessary?  Not in the least, not when the play is performed with as much grace and simplicity as this Frost /Nixon.

…a jolt of reflection worth every spark.

For the uniformly clear and intelligent acting and staging, one must acknowledge director Kevin O’Connell.  His work with the 11-person ensemble was exquisite, as he kept them all clearly focused on the story being enacted.  His staging of the interview-heavy script was also strong as he managed to take all the two-person interview scenes and shift perspective just enough to keep the eyes stimulated. 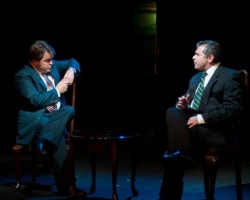 Brendan Murray as Frost and Michael Kharfen as Nixon. Photo by Harvey Levine.

Then we have Michael Kharfen’s Nixon.  What a wonder!  Not only did he capture Nixon’s vocal qualities and his awkward mannerisms, but also with what playwright Morgan clearly infused into the character–a heady psychological orientation.  Kharfen’s rendition of Nixon’s drunken late-night phone call to Frost was superb, as he avoided all of the pitfalls inherent in the monologue while heightening all of Nixon’s personal, class-based rage and ambition.

Nixon’s nemesis, Brendan Murray’s David Frost, is most definitely up to the challenge, as he embodies the talk show host’s suave demeanor, while at the same time capturing his passion for the limelight.  One of the more interesting historical facets of the play is what it reveals about Frost’s personal, financial investment in these interviews, a fact that allows this drama about a historical clash to become a drama between two men engaged in a high-stakes gamble to save their careers.

Frost’s team of producers and researchers also does an excellent job.  Jack Scheer as Bob Zelnick, David Dieudonné as Jim Reston, and Chris Tully as John Birt.  With Murray, these actors rivet our attention with emotional fireworks, as each proffers his best advice on how to achieve a successful set of interviews.

In keeping with the character’s historical interests, Frost also has a young love interest in his corner: British socialite Caroline Cushing.  Diana Partridge does a marvelous job imbuing the otherwise passive character with grace and presence.

Nixon’s team, though not nearly as dramatically engaged as Frost’s, nevertheless offers strong performances.  Mike Goll’s brief appearance as Swifty Lazar is memorable, and Kevin Dykstra’s dynamic portrayal of Nixon’s Chief of Staff Jack Brennan is solid.  Like the cornerman in a heavyweight boxing match, Brennan does his best to protect Nixon from whatever blows might come his way. 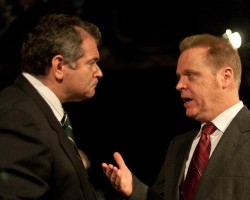 Michael Kharfen as Nixon and Kevin Dykstra as Brennan. Photo by Harvey Levine.

Rounding out the ensemble are Gary Sullivan, Peter Orvetti, and Erica Smith.  Each actor plays a host of different characters from Mike Wallace to Evonne Goolagong and Manolo Sanchez.  Each of their portrayals is clear and engaging.

Although this production is definitely an actor-centered event, the production team does a solid job supporting the performers.  Costumer Crystal Simone Fergusson does a particularly strong job keeping the characters all in the same world and, as the play calls for numerous locales, Lighting Designer Peter Caress uses lights well to differentiate spaces.

In our high tech, three-thousand-miles-a-second-world, it is so easy for Americans to pretend that history does not exist.  That Vietnam never happened.  That Watergate wasn’t that serious.  That deeply ingrained attitudes and presumptions can be changed like wardrobes.  Frost / Nixon does more than remind us all that there used to be a time when a person’s intelligence, ethics, and deeds mattered more than his or her celebrity and PR, and that there used to be a time when Americans were not quite as cynical as they are today about politicians and journalists.

Frost / Nixon reminds us all that there will never be a time when the theatre and its stories simply enacted won’t serve a vital role in our lives, both as a source of memory and as a means of pleasure.  When a production does both in one evening, that is more than a good time.

Frost / Nixon is a jolt of reflection worth every spark.