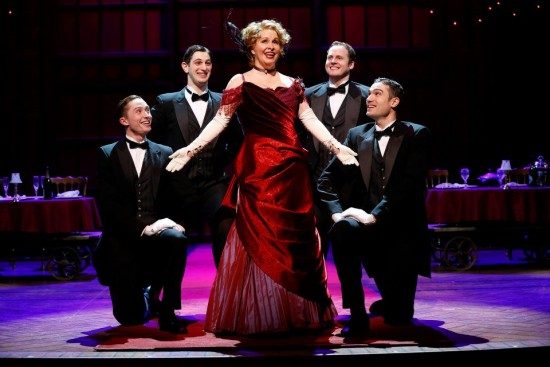 Nancy Opel as Dolly Levi with (at left) Jp Qualters, Harris Milgrim, (at right) Kyle Vaughn and Alex Puette in the Ford’s and Signature Theatre co-production of ‘Hello, Dolly!’ Photo by Carol Rosegg.

Ford’s Theatre and Signature Theatre co-present the first production of Hello, Dolly! in Washington since Carol Channing reprised her famous role at The Kennedy Center in 1995.

Taking place in New York in the 1890s,  this beloved musical classic is about Horace Vandergelder (Edward Gero), the cantankerous and rich owner of a hay and feed shop in Yonkers who hires matchmaker Dolly Levi  (Nancy Opel) to find him a wife.  Dolly won’t rest until every available single person is married including Vandergelder’s niece, the weepy Ermengarde (Carolyn Cole), his clerks Cornerlius Hackl (Gregory Maheu) and Barnaby Tucker (Zack Colonna), and two of Manhattan’s most eligible shop girls, Irene Molloy (Tracy Lynn Olivera) and Minnie Fay (Lauren Williams).  Dolly even has a plan to woo and win Vandergalder’s hand for herself.

Dusting off the script, Director Eric Schaeffer has created a fresh new Dolly that is personal, heartfelt, and engaging. 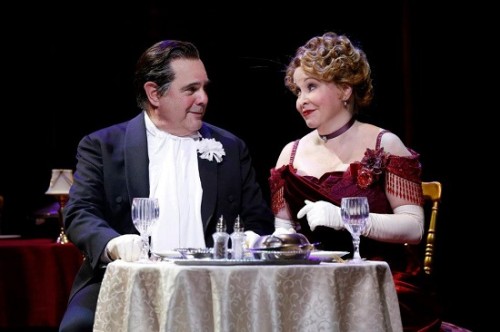 Edward Gero as Horace Vandergelder and Nancy Opel as Dolly Levi in the Ford’s Theatre and Signature Theatre co-production of ‘Hello, Dolly!’ Photo by Carol Rosegg.

To begin with, theatregoers hear the sounds of an old train station as they first walk into the theatre.  The mood is enhanced by the clever set by Adam Koch.  Using the theme of a train station for the entire show, Koch transforms four-wheeled baggage wagons into different set pieces as the story travels from scene to scene.  It is clever to see how the baggage wagons are transformed into Irene Molloy’s hat shop and even a fancy restaurant.

The first song in the musical also sets the tone for Schaeffer’s Dolly. The show normally opens with a large chorus singing “Call on Dolly” at full throttle. Instead, Schaeffer makes it more personal by having individual chorus members sing solos with dialog occurring between verses.  This softer approach was used in many of the musical numbers, allowing for the songs to build as each verse progressed into the next.  This approach is particularly successful when Dolly begins singing very tenderly “Before the Parade Passes By” then later she belts it, and then finally the full chorus joins in the song for the grand finish.  Of course none of this success would have been possible if it weren’t for the memorable songs by Jerry Herman, the terrific musical direction by James Moore, and the new orchestrations created for this production by Kim Scharnberg.

Veteran Broadway actress Nancy Opel, known for her Tony-nominated performance as Penelope Pennywise in the satirical hit Urinetown, stars as Dolly Levi, the life-loving opportunist, meddler, and matchmaker.  She has tough shoes to fill considering the role of Dolly will always be compared to Carol Channing who famously originated the role on Broadway.  A likable Dolly, whenever Opel would speak to the audience, she would be so down to earth that I felt that I could feel comfortable enough to walk right up to Dolly and say “hello.” 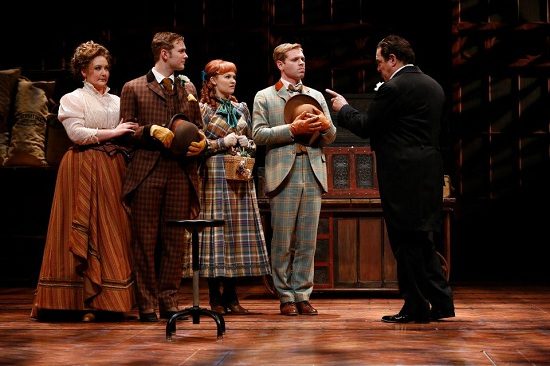 On the other hand, Dolly’s love interest Horace Vandergelder, played by Edward Gero, is so gruff that not only would I not want to walk up and say “hello” to him, I would probably want to walk the other way if he was near me.  This is to Gero’s credit, who is used to playing cantankerous men such as Scrooge in Ford’s Theatre’s annual A Christmas Carol.

As Vandergelder’s young clerks, Gregory Maheu and Zack Colonna as Cornerlius Hackl and Barnaby Tucker both have nice baritone voices and good dance skills.  Maheu and Colonna weren’t as funny as I would have liked them to be in their roles.  Yes, they had a few staged moments where they created laughter, but it was contrived and not natural to the rest of their performance.  What they lack in comedic skills, they make up for when interacting with their love interests Tracy Lynn Olivera and Lauren Williams as Irene Molloy and Minnie Fay.  The chemistry among all four of them is unmistakable, especially when they look into each others eyes.

From the chorus to the leads, all of the singing voices are very good in this production, but Tracy Lynn Olivera really stands out for me as the strongest.  Her solo of “Ribbons Down My Back” is soothing and moving.

…Director Eric Schaeffer has created a fresh new ‘Dolly’ that is personal, heartfelt, and engaging.

Executing some very difficult dances are the hard-working chorus.  Karma Camp’s choreography is highly entertaining and energetic.  The high flying splits and spins featured in the “Waiters’ Galop” is a musical number that I won’t soon forget!  The dancers are working so hard that from the balcony I could see the sweat on their brow.  The comedy mixed in with this scene made it all that much more enjoyable.

This iconic American musical is filled with wonderful song after song.  What is more, this character-driven production tells a great story with memorable characters.  If you are looking for a cheerful outing for the whole family, then Hello, Dolly! should be on your “to do” list.

Running Time: Approximately two hours and 20 minutes, with one intermission. 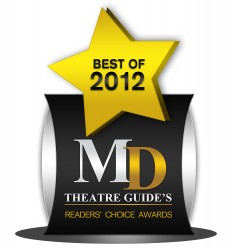