Theatre Review: ‘How to Write a New Book for the Bible’ at Round House Theatre, Bethesda 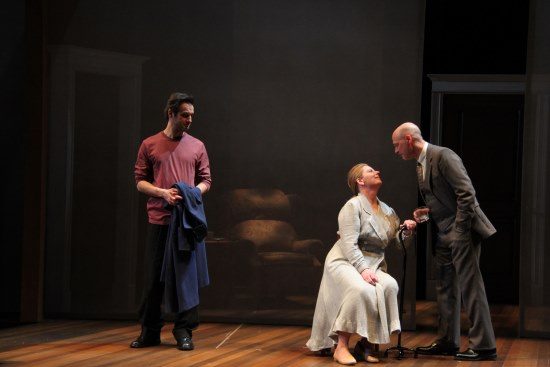 “Believing in God is easy,” says the central character in Bill Cain’s moving meditation on family, How to Write a New Book for the Bible.  Fair enough!  The author is, after all, a Jesuit priest speaking to us on-stage through his semi-fictionalized character, Bill.  But then he says:  “the hardest part is believing this matters.”   In lesser hands a line like this might become a generic lament about faith.  What happens instead is that actor Ray Ficca, who brilliantly embodies the playwright in this production, gestures towards us.  And we realize that what Cain, and Ficca, mean is that sometimes the hardest part is to cherish family, friends, the stuff of life, as the revelations that they are.

…worthy of their memory and well worth seeing.

The conceit behind this play’s title—which has created some confusion, unfortunately—is that every family with each passing century can and should write another book for the Bible, a book (Cain tells us) that is all about families.  For him the Bible is a living thing, not a rulebook or an inert stack of bound paper, and is designed to be lived not obeyed.  Even if you are averse to this kind of preachifying, the portrayal of a writer’s family experiencing their own small triumphs, challenges, and endings will always be the stuff of compelling theatre, as it truly is here.  And although Cain roots the language and metaphor of the play in his Catholic heritage (Roundhouse has wisely provided a few pointers in the program for us outsiders), the universal themes shine through and can often leave you breathless, in tears, or both. 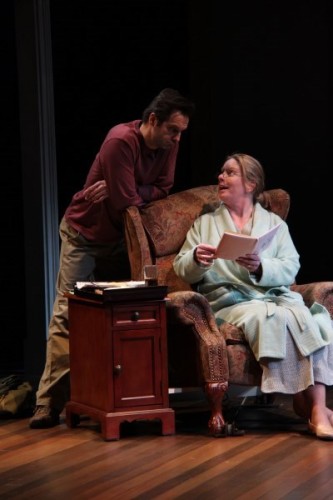 We have seen quite a lot of Bill Cain’s dramaturgy on stage lately, whether in Arena Stage’s exploration of Shakespeare in Equivocation or Forum Theatre’s Iraq war drama 9 Circles.  We know him to be both astonishingly clever and an unflinching, unsentimental observer of the human condition.  Here we meet the writer in his element, surrounded by the family that nurtured him in all their glorious ordinariness:  the steady, stoical father; the nervous, unfulfilled mother; and the elder brother who goes off to the Vietnam War, jealous of the attention lavished on his younger more sensitive sibling (see the program notes on Jacob and Esau).

We learn a great deal about each of them, and Ryan Rilette’s cast performs the material with such ease that each of them becomes in some way a reflection of ourselves.  The petty arguments, the nuisances, the things we think we’d rather forget, become all the more precious when we realize that we’ll never have them to gripe about anymore.  Cain clearly misses arguing with his ailing mother over which brand of butter to stock in the fridge; he misses putting the droplets of morphine in her bowl of apple sauce, to help ease her passage.  As staged here, Bill mixes and then elevates this little morning snack as if for a blessing, before giving it to his mother to eat.  The small rituals of helping others are prominent here and are as unforgettable as they are inevitable.

Opposite Ray Ficca as our writer/priest Bill, Marybeth Wise gives his mother Mary a compelling, sympathetic turn (no program note necessary for that name, is there?).  Stricken with cancer and with only months to live, Wise’s character tolerates her son’s meddling and coddling but only so far; in a hilarious reversal of the 60’s-style generation gap she is found smoking in the bathroom, and catches Hades for it.  Roundhouse stalwart Mitchell Hébert not only embodies Bill’s quiet, unassuming father Pete, but assumes numerous supporting roles with his usual discreet playfulness (and with the help of Rosemary Pardee’s pitch-perfect costumes).  As Bill’s haunted, distant brother Paul, Danny Gavigan charts the quietly intense journey of the older son, whose experiences in Vietnam only serve to further estrange him from his family.  Gavigan, like Hébert, occupies a number of supporting roles, with varying degrees of effectiveness; but he is at his best as Paul, who is as remote geographically as he is emotionally from those closest to him. 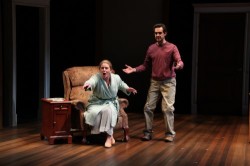 Daniel Conway’s set, complete with translucent slide-screens and mechanized, self-moving furniture, combines the solid reality of a New York City apartment with the dream quality that accompanies a memory play like this; and composer Eric Shimelonis’ acoustic, classically-inspired guitar creates an atmosphere at once pensive and dignified.

How to Write a New Book for the Bible has its moments of drag, especially in the second act; perhaps this is because we know all too well how it will end, but perhaps also it is natural that Bill Cain is reluctant to leave out the minutiae of daily life he finds so precious and revelatory.  We may not follow him through every twist and turn of his family’s history, but the ‘book’ he has written here is worthy of their memory and well worth seeing.

How to Write a New Book for the Bible plays at the Roundhouse Theatre Bethesda, 4545 East-West Highway, Bethesda, MD., through May 5. Tickets  can be ordered by calling 240-644-1100 or online.