Theatre Review: ‘James and the Giant Peach’ at Imagination Stage 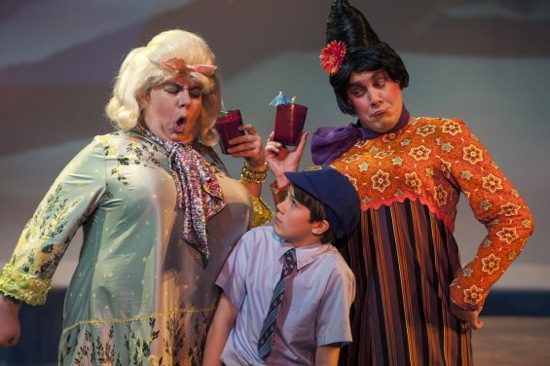 James and the Giant Peach at Imagination Stage brings Roald Dahl’s children’s story to a brightly colored, groovy life.  This musical adaptation has the eccentric and eclectic characters jumping off Dahl’s pages dressed in 1960s attire and grooving to their own live musical beat.

Dahl’s children stories tend to have a child as the title character and at least one adult that is abusive both physically and mentally.  The child must overcome this abuser (and many other obstacles) to  achieve a happy ending.  James and the Giant Peach follows this genre with James losing his parents to a rampant rhino (a brilliant, almost life-size puppet by Matthew McGee) and having to move in with his evil aunts, Sponge (Phillip Reid) and Spiker (Joe Brack).  They look upon him as nothing but a servant boy to cook and clean for them, and certainly not with any love.

If you and your children enjoy Roald Dahl stories, then ‘James and the Giant Peach’ should not be missed.

James does find love and acceptance, but only from human-sized insects that appear when a large peach grows on a barren peach tree.  The magic that enlarges both the peach and the insects that live in and around the peach tree is from magical crocodile tongues given to James by a strange old man who tells James he can have any wish he desires.  When James trips and the tongues get scattered under the tree, James believes he has lost his last hope of breaking free from his Aunts.

When James and the insects get together with the goal of adventure and freedom, they cut the heavy hanging peach from the tree.  The giant peach begins rolling down the hill toward freedom, and as an extra stroke of luck, James’s Aunts get squished along with their house.  In the end, James finds his happy ending, but it takes an ocean, several hundred birds and thousands of hungry children. 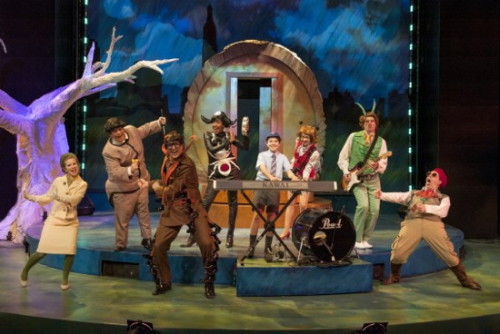 The Company of James and the Giant Peach at Imagination Stage. L to R: Megan Graves as the Mayor’s wife, Phillip Reid as Earthworm, Eric Messner as Centipede, Lauren Du Pree as Miss Spider, Sean Silvia as James, Leigh Jameson as Ladybug, Matthew Schleigh as Grasshopper, and Joe Brack as the Director.
Photo by Imagination Stage.

Dahl’s book was published in 1961, and Director Janet Stanford celebrates that era by cleverly designing James and the Giant Peach and James’s insect friends after iconic 1960s British actors, musicians, artists and authors.  Grasshopper (an engaging Matthew Schleigh) highlighted his lines by jamming out on an electric guitar and channeled Mick Jagger with his swinging hips and pursed lips. Inspired by an actress that appeared in James Bond movies, Ms. Spider’s character (Lauren Du Pree, a fabulous vocalist) was a treat to watch.  Sean Silivia as James easily guided the show along with his charm and obvious talent.

There are some wonderful production moments in James.  One is when the giant peach rolls off a cliff and lands in the water.  Cory Ryan Frank’s lighting submerged the stage in a sea blue lights at the same time as the splash is heard and then the blue lights are dimmed gradually just as the water would fall back down after a large splash.  Brilliant!  Another great idea was to use Monty Python-like video clips for the background action.  Stephen Guidry and David Stern did a fantastic job with cut outs, à la Terry Gilliam.  The only production idea that I think didn’t work well was the device of filming a movie of James’s life during the show.  The prop movie camera was often a distraction and blocked the audience’s view.

If you and your children enjoy Roald Dahl stories, then James and the Giant Peach should not be missed.