Theatre Review: ‘Legally Blonde: The Musical’ by Barbara Ingram School for the Arts at Maryland Theatre 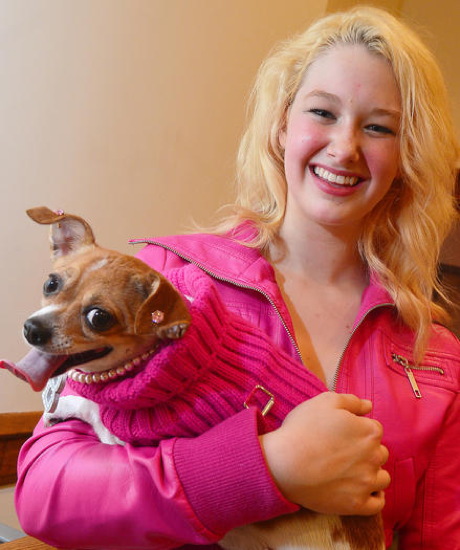 Barbara Ingram School for the Arts production of Legally Blonde: The Musical tracks Elle Woods, a sorority girl-turned-law-student, in a sweet story of self-discovery, ambition, and the power of pink.  Dumped by her boyfriend, Warner, Elle decides to follow him to Harvard to prove that she can be serious.  She overcomes the snobbery of her classmates, befriends Emmett the Teaching Assistant and Paulette, a sassy manicurist looking for love, and learns that some of her very best traits are what makes her an excellent lawyer.

Leah Harrell led the ensemble as the blonde and perky Elle Woods.  She gave a performance full of strenuous dancing, emotion-filled singing, and vivacious acting.  She was matched in sincerity by Ryan Smetzer, as Emmett Forrest.  Smetzer was a pleasant surprise – equal parts talent and personality.  The two were a good match, developing through the scenes as an unintended, but extremely happy couple.

…the cast and crew gave a very good performance…

Kathleen Reed played Paulette Bonafonte.  She displayed a great skill in comedic timing and possessed a captivatingly strong voice.  Her emotions made her an immediate hit with the audience.  Will Bureau played Warner Huntington, III, and ended up being quite lovable, despite the strong desire to dislike such a terrible character.

Two stars shined extra bright that night in Olivia Baker and Taia Collins.  Baker played Vivienne, Elle’s rival-turned-friend.  Although her voice was revealed extremely late in the show, Baker sang with a depth well beyond her years.  Collins played Pilar, one of Elle’s best friends from the Delta Nu sorority.  She proved to be a graceful dancer, talented singer, and had a beautiful smile on her face throughout the performance.  Close to 50 others made up the harmonic ensemble and minor characters, as well as dance teams and a Greek chorus.

The pit ensemble was comprised of student musicians who did a fine job playing throughout the almost non-stop music of the two-hour performance.  The energizing choreography was designed by Andrea Masciocchi, with musical direction by Kyle J. Weary.  Ellen Lenbergs was the scenic designer and the production was under the direction of Ruth A. Ridenour, Director, and Cinnamon Rowland, Stage Manager.

Minor improvements could be made in the areas of vocal diction and the balance between the orchestra and singing voices (which were sadly drowned out in a few areas), but the cast and crew gave a very good performance – especially when you remember that these were high school students.

The historic Maryland Theatre in Hagerstown, Maryland hosts Legally Blonde: The Musical, produced by the Barbara Ingram School for the Arts.  Reservations are strongly encouraged and may be made by calling the Box Office at 301-790-3500 or online. The remaining shows are Thursday and Friday (May 2 and 3, 2013) at 7:30 PM.