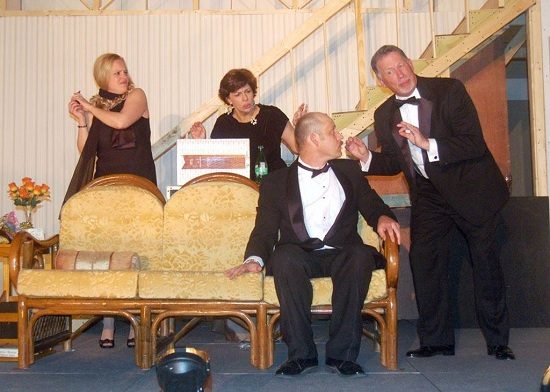 There is a rumor going around Chesapeake Beach and North Beach, Maryland that audiences are enjoying the Twin Beach Players’ production of Neil Simon’s Rumors.  I had to find out for myself, and I can say that the rumors are true. The show is enjoyable!

In this slapstick farce, upper class New York couples arrive at the home of Deputy Mayor Charlie Brock and his wife Myra to attend their 10th wedding anniversary dinner party.  It isn’t much of a party since there is no food, except for a bag of pretzels. But that is the least of their worries since the host, hostess, and even the servants are missing from the party.  Ken Gorman, a lawyer (played wonderfully by James Weeks) first discovers that Charlie has shot himself with a gun through the earlobe in a failed suicide attempt.  For fear of how the media and police would react, Ken and his lawyer wife Chris Gorman (played by the beautiful and exuberant Amy Prieto), and eventually the other couples, do everything possible to conceal the evening’s events.  Comedy arises when one lie-filled rumor leads to another in this outrageous game of telephone where small misconceptions wind up making a huge difference.

Every comedic moment is carefully choreographed by Sid Curl and executed with military precision by the terrific performers.

It is interesting to note that Simon has given the four wives names that begin with C – Chris, Claire, Cookie, and Cassie.  Three of the four husbands are given rhyming names – Ken, Len, and Glenn.  Maybe it was written this way to make a statement on how all upper class people are very similar?  Or maybe Simon was anxious to just write the jokes and pratfalls, leaving it up to the actors and directors to come up with their own character development which seems all too absent from the script.  Either way, Simon never creates the real sense of jeopardy and urgency necessary to make me worry or care about the central character Charlie Brock.  Charlie, after all, never appears onstage.  The audience never gets to meet Charlie so how can we care about him and his political career?

In less capable hands, Neil Simon’s Rumors could be a bore, but director Sid Curl gets the most laughs out of the script and his fine actors.  Every comedic moment is carefully choreographed by Sid Curl and executed with military precision by the terrific performers. 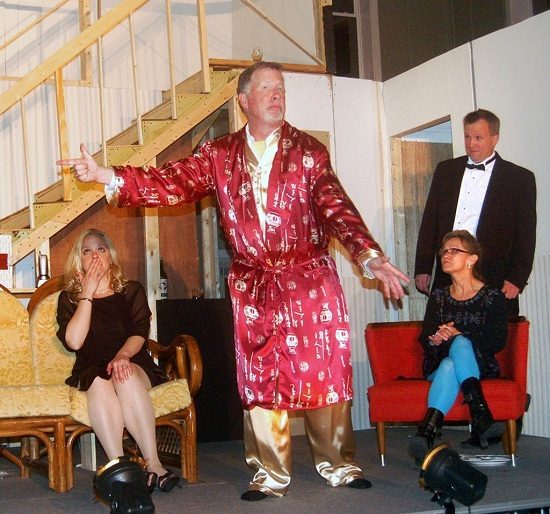 The most well-developed character is Cassie Cooper (Brianna Workcuff).  This young and seductive woman worships her quartz crystal more than her much older husband Glenn Cooper (played with strength by Rick Thompson) who is a politician thinking about running for State Senate. When this pair isn’t fighting like cats and dogs, Cassie is busy kissing, holding close to her heart, and even listening to the sound of her precious quartz crystal.  Everything from Brianna’s pouty voice to her bratty personality adds a lot to the enjoyment of the play.

The other characters we meet are also entertaining.  With his mustache and goatee and long tails tuxedo, Ernie Cusack (Luke Woods), a psychiatrist is at first (not surprisingly) mistaken for the butler.  His wacky wife, Cookie Cusack (Katrina Campbell) is a TV cook show hostess with back problems.

The two most seasoned actors Jeff Larsen and Eva Miller as Lenny Ganz and his wife Claire Ganz both play off of each other very well.  I’m not sure Jeff Larsen realizes how funny he is on stage.  His monologue in the second act is so energetic and funny that it inspired the audience to applaud with much appreciation.  Claire Ganz is quite successful and believable in her character as well, playing her role as a smart aleck.

Last but not least we have Officer Welch (played by the spunky Tyschka) and Officer Pudney (Lindsay Roberts) who come in during the second act and really get the story moving forward.

The set, designed by Sid Curl with the help of Justyn Christofel (master carpenter, assistant director, stage manager) is the largest, most intricate set ever designed by the Twin Beach Players.  The impressive set is the inside of a beautiful home with an upstairs.  A funny joke on the set you should look for is a play poster on the upstairs wall of Lost in Yonkers.  Do you know who wrote that play?

Now here is where I am getting picky but I’m going to mention it anyway.  In the play the phone rings at least 6 different times throughout.  The phone used is a modern cordless phone.  The sound effect, however is an old fashion rotary bell ring.  It doesn’t match.

Overall, the Twin Beach Players production of Neil Simon’s Rumors will entertain audiences thanks to the skillful direction of Sid Curl and the wonderful performers.

Neil Simon’s Rumors plays through April 21, 2013 at the Twin Beach Players located at the North Beach Boys and Girls Club, 9021 Dayton Ave North Beach, MD 20714.  For tickets order online or at the door.