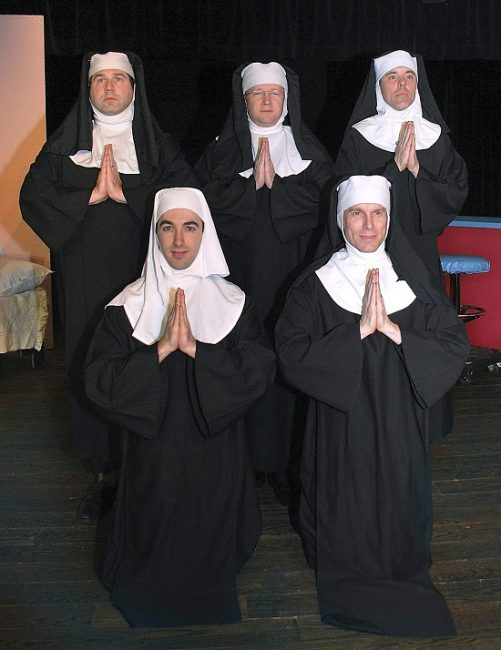 Dan Goggin’s lyrics, “We’re dedicated people but we like to have our fun.  We’re here tonight to share with you the humor of the nun,” sums up the novelty of his musical, Nunsense A-Men!, now playing at the Gaithersburg Arts Barn and performed by the Rockville Musical Theatre.

If you have seen Nunsense or Goggin’s other spinoffs, such as Nunsense II, Nuncrackers, or Nunset Blvd, then you are familiar with the humor of the nuns.  Nunsense A-Men! is basically Goggin’s first Nunsense, only it is played entirely by men. But this is not to be confused with a drag show.  The show is performed totally seriously, yet that is the reason why Nunsense A-Men! is totally funny!

Rockville Musical Theatre productions are often so good, that I feel that they should be labeled as professional, rather than community theatre.  Their current production of ‘Nunsense A-Men!’ is no exception.

The show begins with nuns entering into the audience and telling jokes like, “What do you call a nun that smokes too much?”  (To hear the punch line, you will have to attend the show!)

Trouble ensues when the Little Sisters of Hoboken discover that their cook, Sister Julia, Child of God, has accidentally poisoned 52 of the sisters in the convent.  Now in dire need of funds for the burials of the last four sisters (who are currently being stored in a freezer), the sisters decide that the best way to raise the money is to put on a variety show in the school auditorium. Here we meet Reverend Mother Regina (Duane Monahan), a former circus performer; Sister Mary Hubert (Paul Loebach), the Mistress of Novices; a streetwise nun from Brooklyn named Sister Robert Anne (Bob Schwartz); Sister Mary Leo (Aaron Lempert), a novice who is a wannabe ballerina; and the delightfully wacky Sister Mary Amnesia (Rich Shegogue), the nun who lost her memory when a crucifix fell on her head.

Rockville Musical Theatre productions are often so good, that I feel that they should be labeled as professional, rather than community theatre.  Their current production of Nunsense A-Men! is no exception.

The production values are quite high including the light and sound design by Rick Swink, set design by Bill Brown et al.,  the live orchestra musically directed by Marci Shegogue, the fun choreography by Stephanie Miller, and of course the tight direction by Lee Michele Rosenthal.

The production values are high, but are the performances heavenly?  I would be struck by lightning if I didn’t say that the men playing sisters were anything but macho-marvelous!

Both Bob Schwartz (Sister Mary Robert Anne) and Paul Loebach (Sister Mary Hubert) both excel with their comedic delivery, including funny one-liners and slapstick antics.   This is important considering much of the show relies on funny jokes!  Aaron Lempert (Sister Mary Leo) danced his merry heart out with his ballet number “Benedicite.” Not only did her wear ballet pointe shoes, he also danced quite gracefully on pointe (with emphases on the grace)!  Duane Monahan (Sister Mary Regina) adds to the comedy as the beloved Mother Superior of the Little Sisters of Hoboken by being the strict leader who has so much respect from the rest of the convent.  And I almost forgot to mention Rich Shegogue as Sister Mary Amnesia.  Shegogue’s specialty is his very good singing voice as showcased in his solo song “I Could’ve Gone to Nashville.”

Audience’s of all backgrounds can appreciate the fun antics of the Little Sisters of Hoboken.  At the performance I attended, besides the over 40 crowd enjoying the nuns, I noticed teenage guys and girls laughing hysterically.  And if that age group too can enjoy it, then that says a lot for Rockville Musical Theatre’s production of  Nunsense A-Men!.