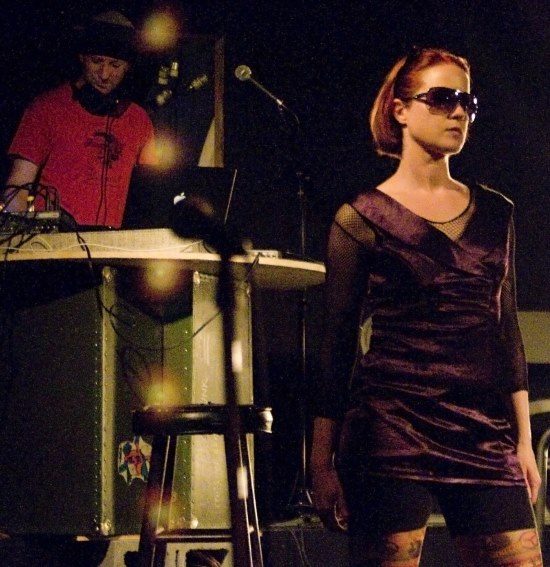 With Taffety Punk’s newest performance piece, Oxygen by Russian playwright/filmmaker Ivan Vyrypaev, one might be tempted to surrender to its stream-of-consciousness prose, to its in-your-face provocations on sex and violence, to its convoluted I-dare-you-to-define-who-and-what-I-am style. Then I, being old and grizzled, could easily claim I just cannot understand kids today, particularly sensibilities from Moscow and its 21st century ipod generation.

…a raucous version of Fyodor Dostoevsky Notes from Underground, where the woman talks back.

Then again, I drank my “obligatory” shot of vodka (or so said, “obligatory,” the woman seated in box office), and I sat myself front row center before a cinder block elevated bed within Capital Hill Arts Workshop’s intimate theatrical space.  So why shouldn’t I respond in streams of consciousness to this Oxygen, this 70-minute concept prose album with music about love and loneliness, hate and fear, dancing and God.

Or as Him and Her so rightly claim, “Conscience.” 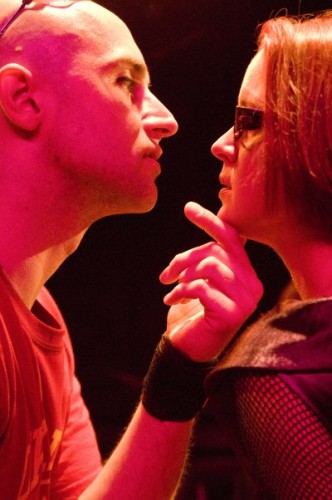 Will you love this performance piece?  Will you think it the most revolutionary artistic achievement in the last six months?  Will you hate it?  Will you declare it so much garbled nonsense?  I will most definitely leave that to your individual idiosyncrasies to decide.  Or, if you are more the conformist type (even if conformistly revolutionary), I will leave the decision to whatever “thing” might be making your decisions for you.

The Him, played by Mark Krawczyk, was a volcanic expression of male in search of—shall I dare say it—oxygen.  He is a man wanting more than anything to find what is necessary.  In a 21st century holocaust of senseless quasi-personal violence, Godless commandments, danceless music, and loveless sex, he wants what is life-giving.  Krawczyk throws himself totally into his role, which is part punk-star, part little boy lost.  At one point in the proceedings, this Him tried to stare me down after making a provocative sexual reference.  I, being the very meaning of stoic ambivalence, never even blinked, and the Him moved on.

The Her of this concept prose album, played by Esther Williamson, enters on “song” three, which establishes the hierarchy.  Williamson is totally Krawczyk’s equal, however, as the feminine version of in-your-face.  Her’s role is to cut through Him’s bullcrap and ego maniacal rap about his life or “whatever.”  She calls Him’s bluff about being a bad a*s, being concerned about poor children, being able to empathize with anyone.  At one point this Her even apologized to me for the fact that Him was such a jerk.

For me—bottom line—Oxygen was a raucous version of Fyodor Dostoevsky Notes from Underground, where the woman talks back.

And it is at that moment when the Her talks back to the Him that Oxygen comes into focus, if but for a few brief moments.  For it is in that moment that the Him is stunned into silence, which is the equivalent of a single shot of self-reflection.  Although growth does not seemingly transpire from that shot across Him’s forehead, it does provide a glimpse into the struggle that is Oxygen.

At that moment I witnessed a story taking shape, which seems to be the very thing that Vyrypaev wants to avoid in this monologue-as-dialogue in revolt.  For in Vyrypaev’s world there are no stories, only psychic fragments that may or may not be true, but that most definitely do not connect with any other fragment, except by pure guess. 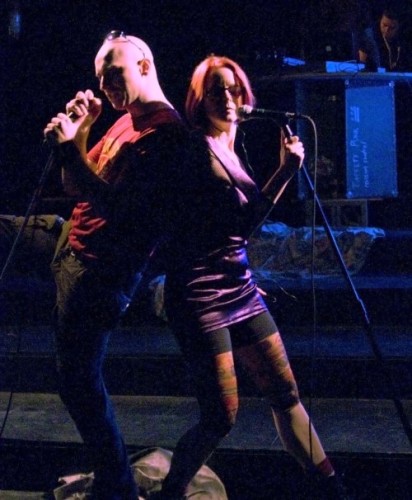 Yet, at that moment when the Her challenges the Him on the verity of his expostulations, a tale is initiated, and as she continues to challenge, to make “crap” out of his manifestos and hyperboles, the story continues.

The most telling moments in this play that is not a play take place on the elevated bed (designed by Peter Adams) that is not a bed, when Her and Him become the couple that is not a couple, but only a couple of performers who come together on show nights and act like they are a couple.

Dan Crane plays the DJ in Oxygen, introducing in Russian each prose song with music.  Framed in his window, he assumes to role of a vicarious storyteller.

The music for the production was composed and performed by a host of different bands or “electronic projects:”  Jupiter Rex, The Caribbean, Electric Blanketland, E.D. Sedgwick, The Gena Rowlands Band, and The Inexhaustible Chalice.  To be sure, the music created texture for the show’s performers, but ultimately the raw prose delivered intimately by two intense performers overwhelmed its presence.

In the end, Oxygen offers its audience a state of being, a consciousness in search of conscience.  It seeks to deliver a theatrical experience that is utterly 21st century, a virtual solipsism wedded to its ipod and its ipad and its iphone and its i-world (a yet to be created reality soon to be at your nearest i-store)–a solipsism that is seemingly unpuncturable.  Meaning, we have become but a population of “i(s)” without a common language or set of Commandments.

Although in this Oxygen, I still think the Her makes clear to everyone that this bad a*s punk star of a Him is nothing more than just a lost yet likable punk of a lamb.