As a title, Pas de Deux, with its connotations of ballet and romantic refinement, might be a bit misleading.  With Skin Tight by New Zealander Gary Henderson and 2-2 Tango by Canadian Daniel MacIivor, we definitely have dancing, but of the psycho-sexual variety.  And we have lots of romance, both the longterm and enduring and the flash-in-the-pan-and-smash-that-watermelon-to-bits kind.  But these two one-act theatrical dances are way too mosh-pit and brutal for a French sensibility, and their raw sensuality, lyricism and wit are sure to relieve even your most stress-filled day.

First up, we have Skin Tight, a lyrical memory play as immixed with rough sex as it is with tender expressions of regret and longing.  Director Johanna Gruenhut has a handle on the rhythms of the romance, but she does not quite know what to do with the style. 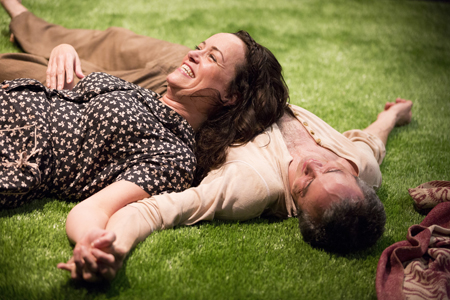 The tricky part of the script, and what director Gruenhut does not quite solve, is its overlapping of memories from different times in the couple’s life.  Told from an aging Tom’s perceptive (played by Ken Vest), as he reflects back on his life with his wife Elizabeth, the memories come as they might in flashes and fragments.  Without a clearer differentiation of the shifts in time and place, particularly since the play’s perspective is not revealed until the end, the production occasionally confuses the audience, which is never a good thing.

If you are feeling in the mood for love … ‘Pas de Deux’ is the duet for you.

Part 2 of Pas de Deux is 2-2 Tango, a fast-paced comedy exploring the equally fast-paced dating scene in Club Urban.  To be sure, the shift from the loose-fitting rural farmlands of New Zealand to the tightly-strapped glam of big city Canada makes for an excellent change of pace.  If the dancing in Skin Tight left the partners with bruises and wounds, the hustle in Tango—from its splendid choreography to its avoid-at-all-cost any possible pain from love and commitment—was delightful to witness even if its real world results are anything but.

Director Eric Ruffin and choreographer Nancy Bannon definitely bring this story into excellent focus with well-timed emotional shifts and dance moves and line sharing that were as syncopated as they were articulate and bold.

To be sure, Alex Mills as James and Jon Hudson Odom as Jim must have made the director and the choreographer’s jobs a delightful experience.  The two actors seemed so totally honed in on each other’s thoughts and wishes as they moved from that first glance across the dance room floor to that decision to “get to know one another,” and thus to all the subsequent fallout from gaining too much knowledge without enough love. 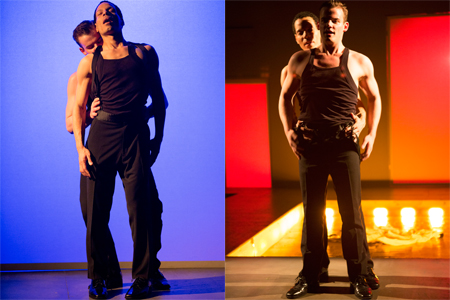 What makes the script so enjoyable is that MaCivor focuses not on the notion that their relationship does not work out, which has been explored ad nauseam, but on the fact that the two people involved just do not seem to be capable of functioning intimately.  The story’s comedy, though definitely enhanced by witty repartee and sleek choreography, is rooted in the psychological dysfunction of the characters as they grapple with the fear of moving from an “I” focus to a “we” focus.  Mill and Odom capture that trembling anxiety with clarity and great humor.

Another dimension of Tango resides in the character of Boy, played by Maceo Dolan-Sandrino, who appears with watermelon at the beginning and end of the comedy.  Like the garnish on a carefully displayed plate of Canadian cuisine, the boy and his watermelon serve as an aesthetic enhancer.  My only regret, echoed by a fellow patron as we left the theatre, was that I was not going to be able to eat any of that deliciously ripe watermelon!

The production team for this evening of one-acts did a wonderful job, proving not only the now old adage “less is more” but also demonstrating the superb versatility of Studio’s 2nd Stage space.  Scene designer JD Madsen sets were provocative and functional.  Costume designers Kelsey Hunt (Skin Tight) and Rebecca Delapp (2-2 Tango) represented the worlds of each play with aesthetic appeal.  Lighting designer Jedidiah Roe did a particularly fine job using silhouette and shadow during Tango.

So if you are feeling in the mood for love, with or without strings, with a touch of the heartland or a dunk in the urban, with modernity’s generations of “me” or with the “me(s)” of a time long ago (say somewhere in the mid-20th century), then Studio Theatre’s Pas de Deux is the duet for you.  These two physically and linguistically lyrical plays are sure to satisfy your craving, even if that watermelon lingers in your dreams.