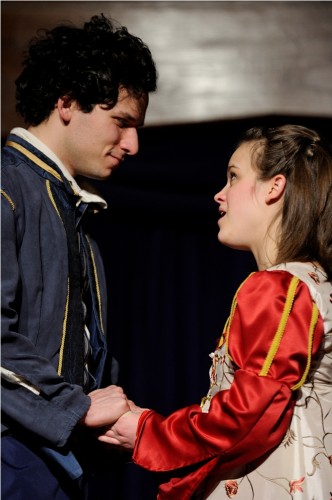 William Shakespeare’s Romeo and Juliet is an ancient play as it was written sometime between 1591 and 1595.  The language used, Elizabethan English, is rather arcane.  And the costumes reflect 16th century everyday wardrobe.  But the Baltimore Shakespeare Factory’s production of Romeo and Juliet, though staying true to the original work, adds a dose of freshness and contemporary whimsy that makes it a fun experience—the play’s tragedies notwithstanding.  An unexpected moment, for example, occurs when cast members begin to dance to “Call Me Maybe” during the play.

The Baltimore Shakespeare Factory prides itself on presenting their plays that are authentically Shakespeare in the manner in which they are staged.  Three productions this season take place in a venue that was once a church but is formatted so that the seating, all pews, is arranged on both sides of the stage as well as in front.  (Two other plays this season will be performed in an outdoor setting.)

Universal lighting is employed (no darkening over the audience) to emulate the theatrical conditions at the time. Actors engage the patrons as they move freely up and down the aisles and at times, speak or gesture directly to a member of the audience.

The cast entertains with musical numbers before the show and during intermission as was the case when Shakespeare’s plays were performed during the Elizabethan era.  They would present songs of the day, tying in the theme of the play, and this presentation of Romeo and Juliet follows that pattern.  Numbers such as “Teach Your Children” and “Teenage Wasteland” are among a dozen or so selections performed with the chorus singing “All You Need is Love” at play’s end.

Then there is cross-gender casting since women weren’t allowed to perform in Shakespeare’s time.  All the female roles were originally played by boys. Productions regularly featured women playing the parts of men and vice versa.  In this presentation, some women are assigned male roles but the opposite did not apply.  Most of the ensemble plays multiple characters with some encompassing both genders.

The acting in this production under the direction of Shakespeare veteran Tom Delise is superb.

Just prior to the play, there was a mock Family Feud TV-style game involving the feuding families in Romeo and Juliet: the Capulet’s and the Montague’s.  As the clever game ended, the scene morphed seamlessly to the start of the play.

The story of two young lovers from each of these hateful families in Verona who were doomed by fate is a familiar tale to most. It starts off light-hearted, almost comedic, but as soon as the first character (Mercutio) is killed in a fight, the plot takes a dark turn, especially in the second act.   Romeo and Juliet features numerous iconic lines and scenes, such as the balcony scene and the final death scene, but the other parts of the play and subplots give it pillar-like support.

The acting in this production under the direction of Shakespeare veteran Tom Delise is superb.  It’s a big challenge to perform Shakespeare, especially delivering rapid soliloquies, given that Elizabethan English is not the normal speech pattern the actors use in their everyday lives.  But this ensemble pulled it off flawlessly, never flubbing a line.

Brendan Edward Kennedy as Romeo is stellar.  Gritty and energetic, Mr. Kennedy nimbly and animatedly weaves around the stage and audience as a teenager would to express his impassioned love for young Juliet.  Kathryn Zoerb as Juliet is intense in her opposition to a potentially forced marriage to Paris (Christopher Jones) and appropriately conveys the pain when Romeo is banished following his slaying of Tybalt, a Capulet (Terry O’Hara).  The two leads play off each other well.

There are other standouts in the cast. Barbara Madison Hauck solidly plays the male role of Mercutio, Romeo’s friend who, while defending Romeo, is killed by Tybalt.  Chris Cotterman is sturdy and passionate as Friar Laurence, a confidant of Romeo.

The splendid period costumes with their detailed authenticity designed by April Forrer contributed mightily to the professionalism of the presentation.  The several fight scenes came off realistically as well, thanks to the choreography of Safe Violence by Dan Burke.

Romeo and Juliet is among Shakespeare’s most popular works. In fact, nearly 80 film versions of the play have been made, not to mention adapted musicals for stage and television.  To be sure, Shakespeare plays are not for everyone; often they are tricky to follow because of the language style.  But if you do enjoy Shakespeare and want to see a professionally directed, acted, staged and costumed Romeo and Juliet and have some fun as well, this one is definitely for you.

Running Time: Two hours and 40 minutes with a 15 minute intermission.

The Baltimore Shakespeare Factory’s production of Romeo and Juliet plays through April 27 at St. Mary’s Community Center, 3900 Roland Avenue in Baltimore.  Tickets may be purchased by phone 410-921-WILL (9455), email info@theshakespearefactory.com or visit online.