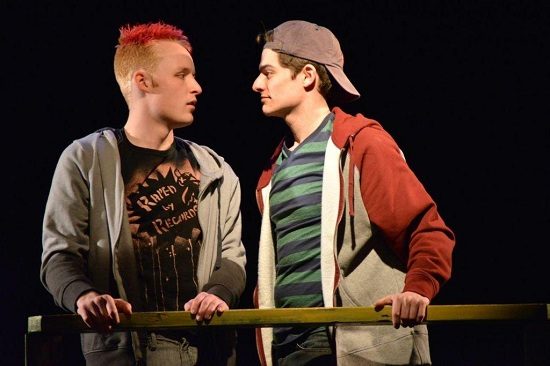 We know how complicated love can be.  With all its obvious pleasures associated with it, we recognize how many challenges exist and how they must be overcome to sustain a loving relationship.  Tricky as that proposition is, imagine how it must be for a teenager to cope with figuring out what true love is.   Then add to that mixture the pain of family loss, his own self-loathing, a past that maintains a strong grip on his psyche, and his dealing with a sexual orientation that society frowns upon albeit to a lesser degree than years ago.

This is what Eli, the central character in Daniel Talbott’s powerful first full-length play, Slipping, currently presented by the Iron Crow Theatre Company, has to confront.   According to Talbott, the play was inspired by among other factors, his own experiences with his best friend in high school.

Iron Crow’s artistic director Steven J. Satta tightly helmed the Baltimore offering and did so with his usual expertise and meticulous attention to detail.  Aided by a strong cast and technical crew, Slipping portrays the angst that most teenagers feel as they grow up especially in matters of the heart.

…’Slipping’ is a sturdy drama, directed and performed with sure-footed skill.

Towson University student Tanner Medding was blessed with taking on the complex role of Eli to demonstrate his proficient acting skills as well as his ability to remove and put on clothing at a frenetic pace throughout.

Eli left San Francisco following his father’s death in a car accident to move to Iowa with his mother Jan (played by Michele Minnick).  He had a difficult time in adjusting.

Eli is gay.  The factors leading to his father’s death troubled him, and he regrets he never had the opportunity to tell his dad the truth about himself.  He is constantly haunted by a crush back home, Chris (Christopher H. Zargarbashi) whose internalized homophobia prevented them from forming a loving relationship.  When he moved to Iowa, Eli seemed out of place (dying his hair a sort of pinkish hue didn’t help his assimilation) and was burdened by the memories of his past.

He is befriended by a new boy, 17 year-old Jake (Rich Buchanan), a handsome, popular, seemingly straight baseball player, who discovers his own attraction to Eli.  Suspicious of Jake’s motives, Eli at first rejects a sexual encounter with Jake but ultimately relents.

They remain friends with benefits for months with the entire school becoming aware of their “relationship.”  But each time Jake tries to solidify that relationship, the angry, jaded, often-sullen Eli pushes back.

As a subplot, the audience learns that Jan was never in love with her husband, that she cheated on him, and didn’t wait long enough “for the insurance to be settled” before she engages in her own sexual encounters.  One thing in her favor, which mitigated Eli’s already difficult adolescence, is that she is supportive of his sexual orientation.

Nonetheless, the melancholy Eli continues a problematic self-mutilation practice of “cutting” that began in San Francisco—the consequences of which open the play.

Through flashbacks to events in San Francisco and rapid back flips to the present in Iowa, Talbott constructs the foundation of Eli’s character and opens the window into his sexuality.  Eli is timid while in San Francisco but transforms into a bitter yet vulnerable youth in Iowa.

Christopher Zargarbashi, having appeared in Iron Crow’s Love and Human Remains and Swimming in the Shallows, played the dangerous Chris with dramatic verve.  His physical attractiveness and penchant for dominating Eli explain why Eli was so hung up on him.   “I wanted to be owned by him,” Eli laments.  But that was not going to happen.

Appearing in five scenes, Chris presents a dark, scary caricature who abhors the fact that he and Eli had sexual encounters and projects that hatred onto Eli by mistreating him.  As they say, love is blind.   Chris warns Eli of the consequences “if any of this gets out,” and in a heart-pounding moment says, “Every time I see you at school I want to just rip you apart.”

Rich Buchanan, who was stellar in Iron Crow’s The Soldier Dreams, is more than up to the task of playing Jake.  His polished acting skills, energy, voice inflections and movements are clearly on display in this role.  Jake’s youthful sexual chemistry with Eli is flawless.

Michele Minnick, another Iron Crow veteran, was solid as Jan. As Eli’s mother, she was challenged by his suspicions that his father’s death was somehow caused by her. Eli was closer to his father than Jan, and it is evident in the dynamics of their relationship.

Tanner Medding is outstanding.  Onstage for almost all of the scenes, Medding plays brooding Eli expertly, playing opposite each of the other three characters who all have conflicts with him.

One device the play employs is that Eli would go off occasionally to the side of the stage in a spotlight and speaking into a microphone to deliver soliloquies on his reflections. The mic isn’t needed as the echo chamber effects of the sound amplification interferes a bit with the monologue.  Other than that, Sound Designer Todd Mion aptly used music in scene changes to great effect.

Another device was the role of two stage hands in interacting with Eli.  They are frequently called upon to move props on and off the cozy Theatre Project stage as one would expect.  But with subtle gestures, they either help Eli to stand up or prod him to move a chair—almost metaphorically trying to assist him on his path towards happiness.

Eli is often seen as an unlikable character whose journey is fraught with danger, sadness and disappointment.  But as the play progresses and his hardships exposed, empathy for him gains traction.

This is not a feel-good story in that it poignantly examines gay teen angst.  Talbott does sprinkle in some humor and jokes, however, to lighten the mood a tad.  But Slipping is a sturdy drama, directed and performed with sure-footed skill.

Advisory: This play contains full nudity and profanity and is not recommended for children.