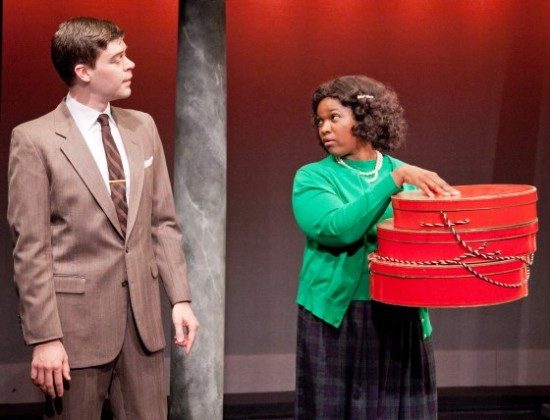 In its 27 seasons, in its several homes, the literary-minded Washington Stage Guild has become one of the best known purveyors of the work of George Bernard Shaw. Now, it’s become the theatrical authority on the works of T.S. Eliot.  Not that the group will stage the Eliot-derived musical Cats anytime soon.

…a production so good you’d wish there was more Eliot they could put on.

But with the current production of Eliot’s 1958 The Elder Statesman (and the reading of his church pageant The Rock May 6) the WSG will be, by its own estimation, the only theatre company in the world to have staged all of Eliot’s dramas starting with The Cocktail Party in 1996, and continuing with Murder in the Cathedral in 1997, The Confidential Clerk in 1999, and The Family Reunion in 2004 as well as “An Evening of T.S. Eliot’s Poetry” in 1997.

Better known, of course, for devastating poems like “The Hollow Men” and “The Waste Land,” Eliot also turns out to be quite a dramatist, imbuing his work with natural and effective theatrical devices and a wealth of ideas that make his plays compelling half a century after their writing. 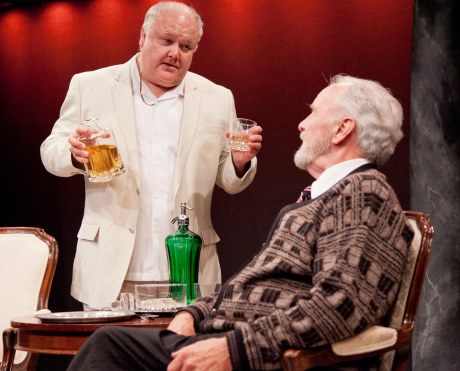 The Elder Statesman begins with a young woman and suitor arguing about spending more time together in a relationship obviously overshadowed by the presence of the woman’s father off stage. That prepares the way for the entrance of the formidable Lord Calverton, who has stepped down from the House of Lords and is about to move to elder housing.

Even as we see how he injects himself into their relationship, a knock on the door comes from a mysterious stranger identified as Senior Gomez, who turns out to be an old college friend back when he had a different name — and so did Lord Calverton.

A recent convict, he has some unsavory secrets about the esteemed politician’s past that just might mar his public name as he settles into retirement. At the retirement center, a second figure from his past — an early lover — also surfaces suddenly, reflecting on her suit against him and about to read aloud the love letters she still has with her (well, copies of them; the originals are in her lawyer’s safe).

What’s meant to be a golden time of rest is one now of great irritation and trepidation for the elder statesman, whose public life clashes with his private past. How will this square with his daughter or with his son, who is suddenly back after quitting a job and seeking a new direction?

The Elder Statesman was fittingly Eliot’s final play and, as such, it contemplates end of life issues, as well as looks back at a life’s misdeeds and regrets in hopes of coming to terms with them before death.  Director Bill Largess notes that most of Eliot plays were inspired by Greek stories; in this case, it was Oedipus at Colonus in which the blind king comes to term with the fact he may have killed his father. The crime in Statesman is a less extreme, but it does involve hitting a body on the road.

Eliot wrote most of his plays in verse style; and it’s worth seeking out the text to see it laid out on the page. On stage, his works lose their internal rhyme, but there is no doubting the serious consideration given to important issues in surprisingly frank and expressive speeches.

At the same time, there are plenty of moments of humor that never extend to farce.

Astoundingly, this is apparently the first time the work has been staged in D.C., and the success of the WSG production lies in its straightforward presentation of an often brilliant text, and its strong cast. 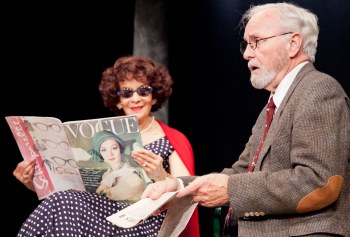 The striking John Dow is just right as the old man besieged on all sides. If he falters on some of the extensive soliloquies he delivers, it can be attributed to the age of the character more than the extent of his task. Even when not speaking, he conveys a lot in his expression, usually a sour one at the people he has to face.

Kelly Renee Armstrong has a sweet serenity as the supportive daughter.  Robert Leembruggen brings a sly and subtle swagger as the scheming Gomez and is quite a presence on the stage. Two women in the second act enliven things considerably — Jewell Robinson as the faded former cabaret star who holds a flame for the esteemed gentleman and Lynn Steinmetz is comic perfection as the meddling proprietor of the elderly housing.

The cast is rounded out by Kevin Hasser as the fiance and wayward son Michael Avolio who both put in solid performances, as well in a production so good you’d wish there was more Eliot they could put on.

The Elder Statesman by the Washington Stage Guild runs through May 19 at the Undercroft Theatre of Mount Vernon Place United Methodist Church, 900 Massachusetts Ave NW, Washington. Tickets at 240-582-0050 or here.