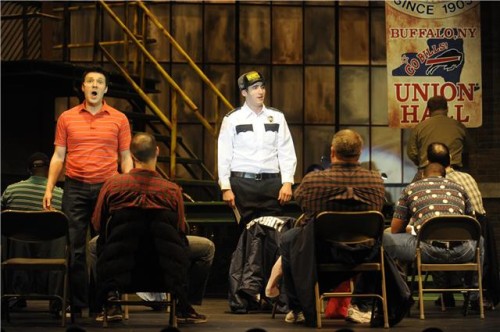 The cast of ‘The Full Monty.’ Photo by Suzanne Carr-Rossi.

This musical adaptation of the 1997 British comedy, The Full Monty, playing at Riverside Center Dinner Theater, tells the story of six unemployed steel workers who decide to perform a Chippendale act in order to make money quickly, though in order to have the edge over other male striptease acts they decide to go “the full monty,” strip all the way, as reflected in the title. Though the premise is quite provocative, with themes geared towards a mature audience, it is, as the director Patrick A’Hearn states, a show about family values. Underneath the innuendos, witty banter, and “adult” situations is a show about love, friendship, overcoming one’s insecurities, and being comfortable with oneself.

…Riverside Center Dinner Theater puts on a fun and energetic performance of ‘The Full Monty’ that will keep the audience laughing right to the end.

As we meet each of the six main characters, Jerry, Dave, Malcom, Harold, Horse, and Ethan, we are introduced to their individual issues. Jerry Lukowski is unable to pay child support and is in danger of losing custody of his son, Nathan, to his estranged wife Pam.  Dave Bukatinsky, his best friend, is dealing with his insecurity over his weight, which is beginning to affect his relationship with his wife, Georgie; in addition, he has financial difficulties. A socially awkward and lonely Malcom Macgregor is discovered attempting to commit suicide by Jerry and Dave. Harold Nichols, once the foreman at the steel mill, is also unemployed and hiding it from his wife, though it is beginning to take a toll on their extravagant lifestyle. Later, they are joined by the two other men, Noah “Horse” Simmons who, despite being significantly older than the group, offers his natural dance talent, and the talentless Ethan Girard, who longs to be a performer but has no coordination. 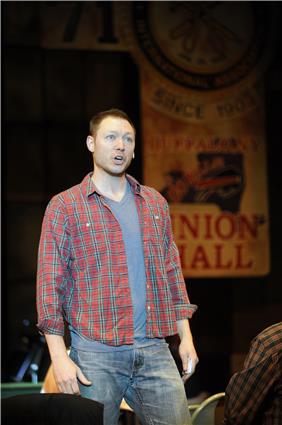 Jeremiah Zinger’s distinctive performance captures the voice of Jerry as contentious and cheeky one moment yet supportive and loving the next; in essence, he is the average male. He has a strong stage presence and his interactions with the other characters, though slightly dominating, are genuine; such as the relationships with Dave, his friend, and his son, Nathan (Giuseppi Inserra). Also, his strong tenor vocals bring a very “real” edge to pieces such as “Man” and “Breeze off the River.”

In addition, the other actors perform the unique roles of each character exceptionally well, capturing the personality quirks and individual struggles of their respective characters. Ian Lane (Dave) and Devon Clark (Harold) sing a beautiful duet with their wives, “You rule my World,” and Jerrial Young (Horse) steals the stage with his smooth dance moves and infectious rendition of “Big Black Man.” We are constantly amused by the eccentric Tommy McNeal (Ethan) and his efforts to dance like a pro, and truly touched by James Bock (Malcom) as he sings the lovely lament “You Walk With Me.”

While the show centers around these six men, they are not the only notable theatrics, for the female characters bring their own talents to the stage as well. Vilma Gil does an incredible job as Harold’s wife Vicki, portraying her domineering, materialistic side on one hand (“Life with Harold”), and her softer, more loving side on the other (“You Rule My World”). Katharine Salsbury plays the spirited Georgie, and her strong voice definitely holds its own against the show’s male performers.

However, we must not forget the incredible Sally Struthers, who plays the seen-it-all pianist Jeanette. She has a commanding presence on stage and demonstrates true talent that goes beyond her character’s funny one-liners. Her hilarious piece “Jeanette’s Showbiz Number” is a memorable performance and a clear favorite of the audience. 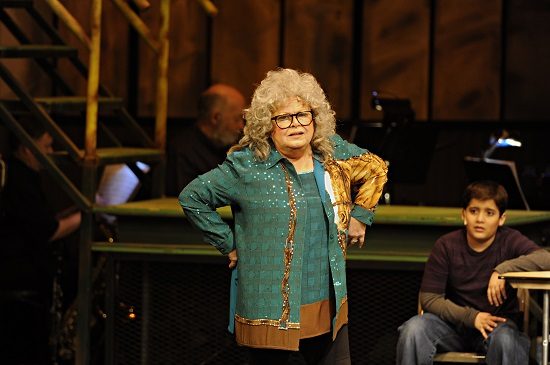 Though we are drawn in by each character’s quirks and struggles, what truly makes the show enjoyable are the group performances. In “Michael Jordan’s Ball,” “The Goods,” and “Let it Go,” we see the true talents of the cast and directing comes out as well. The dance and song numbers manage to combine the distinct personalities of each individual character into an engaging and cohesive group act.

Even though the subject matter of a male striptease does give the impression of being “dirty” or vulgar, the direction focused on keeping it light-hearted and funny, despite touching on more serious themes of suicide, homosexuality, unemployment, etc. Overall, Riverside Center Dinner Theater puts on a fun and energetic performance of The Full Monty that will keep the audience laughing right to the end.

Running Time: 2 hours and 20 minutes with one 20 minute intermission.

Caitlin Hamon has a Bachelor’s degree from George Mason University, and is currently pursuing her Masters education. She works as a research assistant and tutor on George Mason and Mary Washington Campuses. She has been involved in various productions as a singer, actress, and dancer since early childhood; though no longer in the performing arts, maintains an active interest in Theatre and Music and occasionally works with the local Stafford Choral Society.