Theatre Review: ‘The Lady Becomes Him’ by Faction of Fools at Gallaudet’s Eastman Studio Theatre 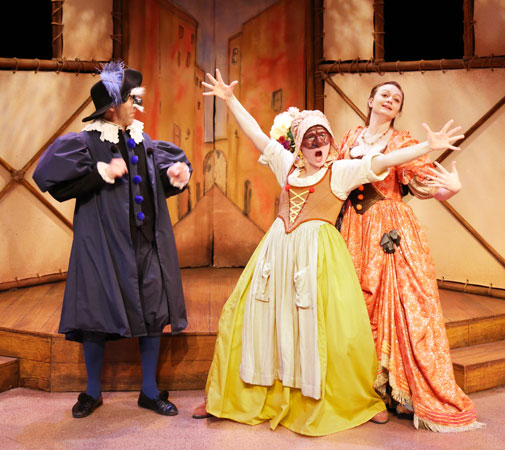 Faction of Fools, DC’s Commedia dell’Arte company, is back this spring with The Lady Becomes Him, a wild adaptation and expansion of a three-page, 17th century text called Donna Zanni. Using classical technique, mask-work, and improvisation, the company tells a humorous story of forbidden love and mistaken identity. And while the style may be unfamiliar to some theatregoers, the content is accessible, immediate, and fun.

…a unique and entertaining piece, perfect for those in search of a laugh and some lighter theatrical fare. 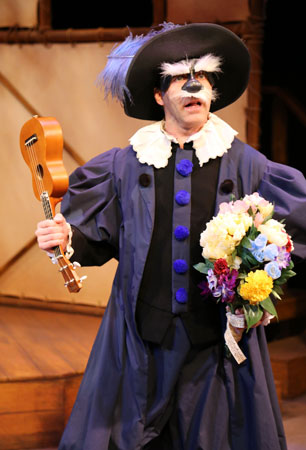 I came into this production with the personal view that Commedia, as either an art form or an exercise, is most useful as a means of freeing actors from the constraints of realism and pushing them to find extreme, physical solutions to the problems at hand. That’s not exactly what Faction of Fools is after here. The play is age-appropriate (13 & up), and the lazzi are relatively restrained—I was never shocked. Instead, the company has crafted an original piece that, while rooted in the physical, Commedia style, focuses on language and the barriers of communication. I was surprised and impressed by the results.

Employing both deaf and hearing actors (Faction is in residence at Gallaudet) under a hilarious caption board with a sarcastic mind of its own, the company uses ASL as a bridge between physical and verbal forms of expression.  This allows for a multitude of comic miscommunications and at times reverses the dynamic in the audience; suddenly, it is the hearing members who must rely on the captions to understand what is taking place onstage. Even the onstage interpreters, who were part of the entire rehearsal process, get their own moment and become part of the narrative.

The comedy could certainly go further, and probably will; comedies, and especially those that allow for improvisation, tend to benefit from an audience and improve over the course of the run. This is not to discount the moments that are already quite funny: Orazio’s deal with Pulcinella, Dottore’s string of insults and double takes, Pulcinella’s improvised berating of latecomers, Mulford’s utterly bizarre ring spirit, Orazio’s self-centeredness and failed suicide, and Luzio’s physical repetitions all showcase the company’s style at its best. The show also benefits from live music, courtesy of Coviella and Rosetta, and generally strong acting by the ensemble. After the crucial gender-switch, Snyder stands out with her excellent portrayal of Pulcinella-as-Celia, and Pauli brings it all home with a sincere, if ever-so-slightly longwinded (wink) epilogue. 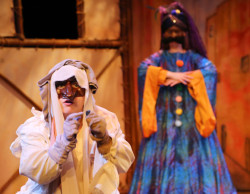 The design of the show is strictly classical; with the exception of the lighting design (Chris Holland) and captions, the audience is seeing basically the same stage picture they might have encountered three hundred years ago, much to the credit of the production. The set (Daniel Flint) has some clever turns, and, being largely composed of laundry, allows for numerous entanglements and gags.

The Lady Becomes Him is a unique and entertaining piece, perfect for those in search of a laugh and some lighter theatrical fare. And for all the assertions that “theatre should be for everyone,” few companies are making such bold and inclusive strides as Faction of Fools.

Advisory: for those 13 and up.

Running time: 90 minutes with no intermission. The Lady Becomes Him runs through May 12th at the Elstad Annex of Gallaudet’s Eastman Studio Theatre.  For tickets click here.