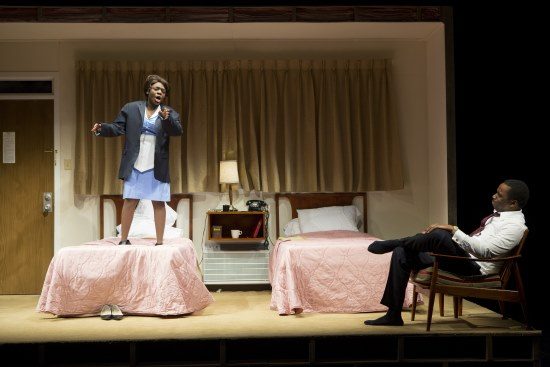 On April 4, 1968 the world lost one of its greatest voices for civil rights. It was Martin Luther King Jr., and Katori Hall’s play, The Mountaintop, now playing at Arena Stage takes us inside Room 306 at the Lorraine Motel the night before King’s assassination. There we find King (Bowman Wright) working on his next speech. He orders some coffee and it is delivered by a maid named Camae (Joaquina Kalukango) who is just starting her new job. King is paranoid about his room being bugged and thinks Camae was sent as a trick so he would be caught with another woman, which is quite the opposite of the truth.  That is the basic story and for more I highly urge you to go see the play to find out what happens.

Live the dream. Check out ‘The Mountaintop.’

Performance-wise, Wright and Kalukango are both first rate. Wright’s portrayal of King is spot on. Wright sounds and looks just like him, and he also captures King’s passion as well as his love for his wife Coretta. It also struck me that King had a bit of an ego from watching this show. This was surprising to me, but Wright’s performance is so good you forgive it and really get to focus on the man himself. 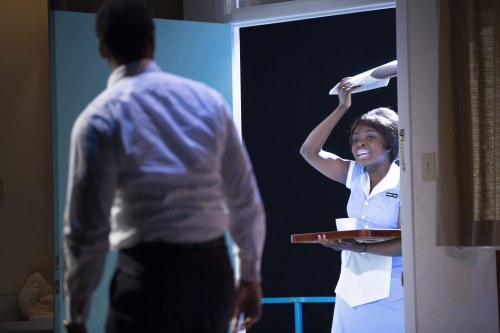 Kalukango as Camae gives a feisty and wonderful performance. Her chemistry with Wright is something to marvel at. It’s hard to hold your own against such a powerhouse like Martin Luther King Jr. but Camae most definitely does, and Kalukango turns a fictional character into something very believable.

Director Robert O’Hara has directed the piece with great energy and power. He has two really good actors and, because of this, he is able to really delve into what Hall was going for with her script. It should be noted that this production does not have two Hollywood actors like the Broadway version and you know what, it doesn’t need the celebrity. Hall’s script is very well constructed, so if you have two strong actors as we do here, the Hollywood glamour can stay in Hollywood. 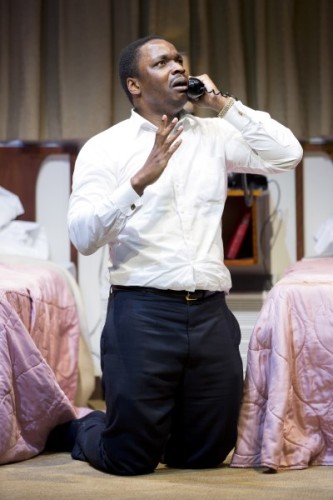 Clint Ramos’s setting of the Lorraine Motel is designed with a turntable so we can be outside on the balcony of King’s room one second and then inside the room the next. By using this method of changing scenes, it makes the transitions seamless.

All in all, The Mountaintop is highly recommended. It gives us a look into the last night of one of America’s greatest civil rights leaders. The two performances alone are worth the price of admission. If you add O’Hara’s fine staging, The Mountaintop keeps the memory of Dr. King very much present. We should never forget all he did in his short 39 years and, as this play shows to the end, he never stopped fighting for equality. Live the dream. Check out The Mountaintop.