Theatre Review: ‘The Personal(s)’ by No Rules Theatre Company at Signature Theatre 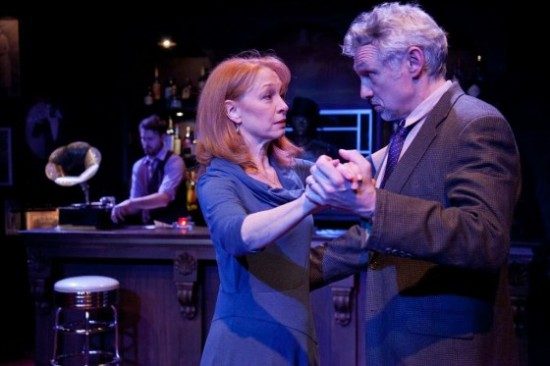 If I were to tell you that The Personal(s), now playing at the No Rules Theatre Company in residence at Signature Theatre, was about a married couple who, after the death of their daughter in a horrible car wreck, struggles to save their marriage through a series of role-playing “blind dates,” you might say: “That play sounds interesting.”

And it does, as the premise for a play.

The distance between a premise for a play and an actually script is, however, galactic.  How will the playwright take us from that first “blind date” through the second to the third?  What is the backstory of the characters and how will it be revealed to the audience?  Namely, what were the circumstances of the car wreck that led to the estrangement?  And what about that role playing?  Why those roles in those situations?  In other words, for any script the “devil is in the details.” 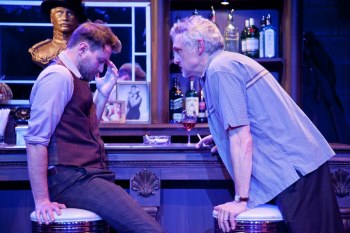 In the No Rules’ version of this story, adapted for the stage by Producing Artistic Director Brian Sutow from two versions of a film entitled Blind Date, the decision to use a fractured narrative and a confusing and not-so-insightful backstory leaves the audience bewildered and feeling remote.  “Who are these people?” I’m left asking myself.  “Did the husband really rape his wife?  And what about this violent sex with his mother?  If he isn’t serious, why is he taunting his wife with sick humor like that?  Does he really own this bar?  And most importantly, do I really want this couple saving their marriage?  Shouldn’t the wife move on with her life and leave this guy behind?”

Here is the story I witnessed.  Through the fourth wall we entered a magician’s bar complete with posters of Houdini and a small stage for Don, the owner, to perform his comic magician’s act.  He rehearses it a few times; it is cute and cornball funny.

Don has placed an ad in the personals in an attempt to “re-find” that chemistry that made his relationship with his wife of 12 years so special.  His wife, Janna, responds, presumably by design, and the couple attempts to rekindle their relationship from scratch, so to speak.  All is going relatively well, until Janna tells Don that she knows a man really loves her when the man does not respond negatively after being told that she does not want to make love.  Don, in this case, gets mad, and Janna leaves. 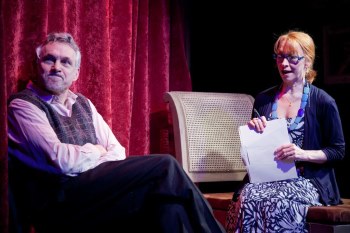 More ads in the personals are placed, one for an aggressive woman, one for a professional.  In the former, Janna smacks Don across the face and dominates him; in the later, she tries to offer him therapy—in what may have been a bit of miscommunication over the meaning of “professional woman.”  Along the way, progress towards Don’s goal of rekindling their relationship seems to be occurring a la two steps forward, one step back.

Meanwhile the play’s end seemed completely out of some nether region the script did not explore.

None of this is to say, however, that No Rules Theatre and director Josh Heckt do not put on a first-rate looking production, or that the acting isn’t, at times, very engaging.  For both are strong, and Heckt’s pacing of the show and his ability to help his actors touch believably deep emotions is superb.

The cast does a solid job, most especially Anne Kanengeiser in the role of Janna.  She embodies the character’s undercurrent of trauma, disguising it when needed, letting it erupt when provoked.  Michael Kramer’s Don also has his moments, as he allows us to witness his anguished love for his wife.  What neither character fully possesses, and what the script does not sufficiently support, is the 12-year relationship that this man and woman have with one another, a relationship supposedly vibrant enough to sustain it through the horror of sexual violence and the death of a child.

Spencer Trinwith’s Henry, the waiter and scene indicator, who for some strange reason remains loyal to his ungrateful boss, provides most of the comic relief during the play.  His relaxed, more carefree approach to life offers the audience a sharp contrast to Don’s anxiety.

In the end what The Personal(s) clearly demonstrates is that no matter how many newfangled storytelling techniques are employed, no matter how clever the staging or wonderfully spectacular the visuals, theatre will always live or die by its ability to allow an audience to care about its characters and/or their fate.  And for an audience to care, they have to get to know those characters, their desires, their weaknesses, and their strengths.  Failing that, we in the audience can sit back and enjoy the talented actors, the care and skill of the designers and carpenters, and maybe even a witty one-liner or an insightful comment uttered over a glass of red wine, but we will not leave the theatre with feelings of hope, good-fun, or edification.

And those rewards are, after all, what theatre is all about.

The Personal(s) plays at No Rules Theatre in residence at Signature Theatre, 4200 Campbell Avenue, Arlington, VA, through May 18.  For information or tickets click here.