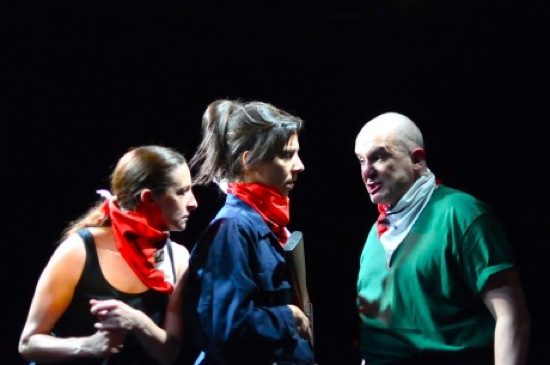 On December 17, 1996, a rebel group called the Túpac Amaru Revolutionary Movement (MRTA) took hundreds of high-level dignitaries hostage at the Japanese embassy residence in Lima, Peru. While many hostages were released, some were held for a total of 126 days–more than four months since first stepping through the doors to attend Ambassador Aoki’s party at the Japanese embassy. The VIP, now playing at Single Carrot Theatre, chronicles those harrowing days in captivity.

Playwright, director and ensemble member Aldo Pantoja has done a rare thing here, crafting a brilliant and very human play from a single moment in history. The audience watches not only real moments of fear–as Lalo’s (Carlos del Valle) pleasant dreams are interrupted by a gun to his head–but also humor and sympathy. Mario (Eric Paul Boelsche) and Pedro (William Dalrymple) devise a mousetrap from their Red Cross-issued lunch boxes. Revolutionary Melisa (Natalia Ballestero) spends her watches writing poetry. In a flashback sequence, Inca chief Atahualpa (Felix Guardia) sheds his fantastic raiment, gets baptized as Juan, and is executed by garrote.

The level of reality and accuracy in this performance is remarkable.

Part of the effect of this play comes from the staging–alley style, meaning there is seating on both sides, every movement of the actors immediate and near. Sound designer Dan Cassin has perfectly replicated the barrage of gunfire and violence that accompanied the rescue operation, while music director Britt Olsen-Ecker delivers haunting Latin American folk music. One of the revolutionaries strums an assult gun like a guitar. 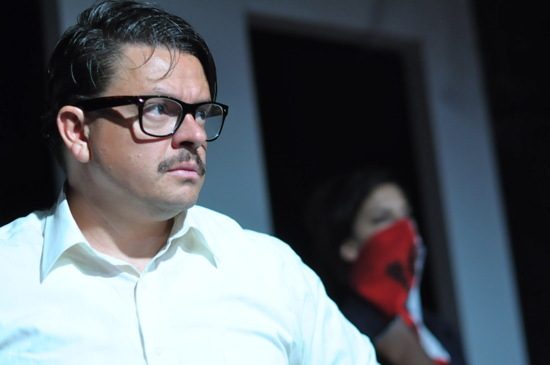 Pantoja succeeds here not only as a playwright but also as a director, effectively orchestrating a cast of eleven so that each role is compelling and memorable. The director’s intimacy with the work is palpable here. Carlos del Valle’s narration, for instance, is consistently gripping, even with long portions of exposition, and Daniel Douek is downright compelling as MRTA leader Cerpa. The level of reality and accuracy in this performance is remarkable.

Running Time: Approximately 2 hours and 10 minutes with a 10-min intermission.