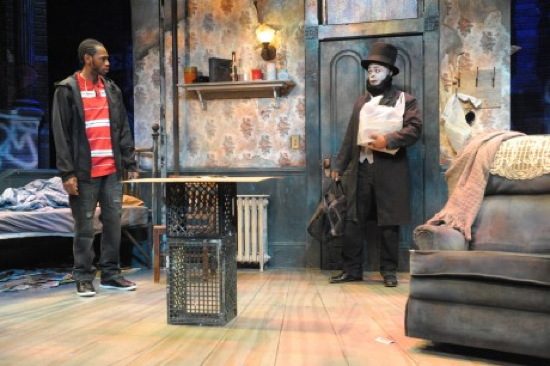 As people, as a nation, what are we to do with our dark history of violence and oppression? Is it the key to our progress and redemption, or are we doomed to keep repeating the same mistakes in a new disguise? These are among the questions posed by Suzan-Lori Parks’ Pulitzer Prize winning play, Topdog/Underdog, making its Baltimore debut at Everyman Theatre.

The sinister and delightfully absurd plot centers around two African-American brothers named Lincoln and Booth—their absent father’s idea of a “joke.” The former has a job playing his namesake in whiteface at an arcade, where the paying masses line up to perpetrate his mock assassination. Booth has an apartment, an aspiration to hustle Three-Card Monte, and a gun. The sexual and professional jealousy over the brothers’ past is continually framed against Booth’s idealistic vision of their future. But while it seems Lincoln’s forsworn gift with the cards is all that stands between them and fruitful collaboration, the system is ultimately rigged against them—much like the game itself.

…it is an enjoyable and thought-provoking piece that deserves an audience in Baltimore.

There’s a lot to like about this production; it’s a funny, visually engaging, and highly original interrogation of the persistent legacy of racism and economic oppression in America. At the same time, it drags along a handful of missed opportunities.

Kenyatta Rogers’ performance as Lincoln is, by itself, worth the price of admission. The character is a successful marriage of his bizarre profession and sincere humanity, with a physical and vocal specificity that commands attention (Lincoln’s original blues song is perhaps the most haunting moment of the show). Booth (Eric Berryman) hits his stride with a striptease of stolen goods and monologue about his inheritance, but without any real moments of stillness, his restless movement grows tedious and expected. Despite this, the two actors have a humorous and compelling rapport and do an excellent job navigating Parks’ complex language—at least until the end. The last three minutes are as unconvincing as they are predictable; the culminating “event” comes off as rushed, melodramatic, and under-rehearsed. 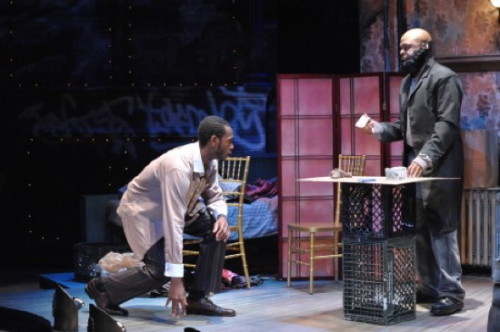 The set (James Fouchard) gestures towards urban decay, but reads as expensive and chic—as if Booth’s one-room dive had crash-landed in a hipster enclave of Brooklyn. His costume has the same effect; it all feels too pretty for a world of, to quote Lincoln, “Cotton candy and raw s***.” The rest of the costumes (Levonne Lindsay) are well fitted to the play’s preoccupation with dressing and appearance. The preshow hip-hop is more kin to the content that the original transition cues, but the internal sound effects (Chas Marsh) are subtle and impressive. Throughout, the lighting (Colin K. Bills) provides a hot-and-cold division between the apartment and the outside world.

The script is heavy on exposition for two brothers who know each other so intimately, and director Jennifer Nelson’s commitment to realism doesn’t always serve the text. In fact, the production’s one overtly stylized moment—Lincoln’s solitary rehearsal of his assassination—is also its most successful. The show is a little long (and repetitive), but overall, it is an enjoyable and thought-provoking piece that deserves an audience in Baltimore.

Running Time: two hours and 30 minutes with one 15-minute intermission.