Theatre Review: ‘U Probably Think This Play Is About U’ at Strand Theater Company 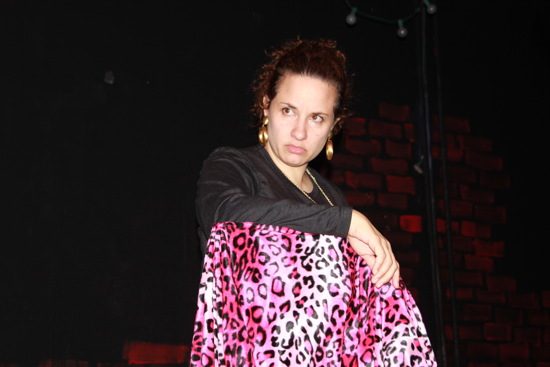 In Strand Theater Company’s U Probably Think This Play Is About U, writer/performer/protagonist Maija DiGiorgio struts and frets her hour upon the stage, filtering her woes about love through a Shakespearean lens. DiGiorgio’s point is not to shed light on Shakespeare’s characters, but to use Shakespeare as a means of expressing herself. The result is an honest, unpretentious performance that cries, “So what if this story has been told a thousand times? Let me tell you my version.”

If it’s been a while since you consulted The Complete Works of William Shakespeare, never fear. DiGiorgio’s intentions are clear even if you don’t recognize a bespectacled Italian grandmother as Katherine from Taming of the Shrew, or a tap-dancing, fedora-wearing jazz storyteller as Othello. A blinged-out, fast-talking city girl hangs out her window and tells you the tragic story of her lover Tyromeo. A slacker in a skullcap tells you about the man who killed his father, seduced his mother, and worst of all— ate his breakfast cereal. A boozy, streetwise woman bathed in a telltale red light tells you how best to manipulate a man. While all the characters are clever and compelling, Katherine and Othello are the most memorable.

The beauty of  ‘U Probably Think’… lies in its use of recognizable characters to cast a light on common human neuroses.

The lines between performer and character blur in the final scene where DiGiorgio/Othello tap-dances and sings about lost love with charisma and relatable misery (oddly reminiscent of the Tom Waits concert film Big Time). Director Rain Pryor allows DiGiorgio to run wild, and the production never feels heavy-handed or over-directed. The spoken text is manic and the pacing is chaotic, but that is who the writer/performer/protagonist is. In the opening scene, DiGiorgio owns up to her insecurities and admits that she can only share her vulnerabilities while under the guise of a character. (How As You Like It is that sentiment, right?) She reveals why she wrote the play in a final moment before an abrupt blackout. While the ending might leave you feeling deprived of an emotional catharsis, it is easy to relate to her fear of being emotionally naked a room full of people. 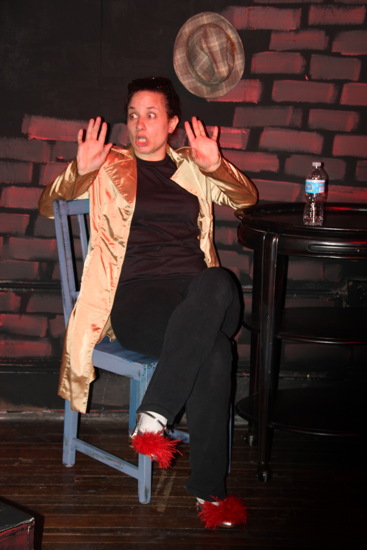 A vibrant, urban set design by Ryan Haase mirrors DiGiorgio’s informal performance, with hastily scrawled graffiti on the walls and props and costumes scattered this way and that. DiGiorgio sets each scene in a flourish, making do with what she has— a proper metaphor for her protagonist’s neurotic-but-handling-it attitude.

The scene transitions drag down the hectic pace. As DiGiorgio wheels props on and offstage, she wastes valuable seconds interacting with the audience. While an apologetic song and dance makes sense in the context of her character’s insecurities, it does little to enhance the overall theatricality. At times, the accompanying music overpowers the clever wordplay. Audience members put off by direct address will be happy to know that although DiGiorgio frequently breaks the fourth wall, she is always has the situation under control. She never places the success of a bit on an audience member’s response.