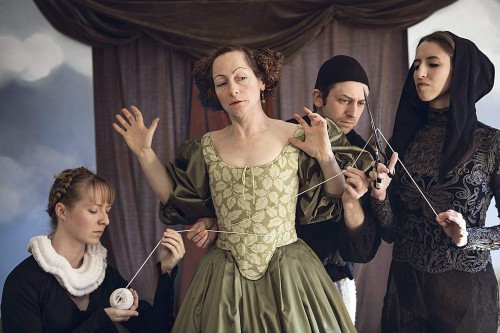 Happenstance Theater’s Vanitas seeks—as its co-founder Mark Jaster writes—“to render the imagery and form of a ‘Vanitas’ still life painting in a work of ‘visual, poetic theatre.’”  A vanitas painting refers specifically to the symbolic still lifes of 16th and 17th century Flanders and the Netherlands, but more broadly to those visual depictions of the medieval definition of vanity, which portrays all of physical existence as meaningless and vane and destined ultimately in death, both grotesque and morbid.

… in those moments of magical movements that ‘Vanitas’ shines, giving us not just three dimensional still lifes but choreographic sleights of hand.

To be sure, such an ambition is both audacious and challenging.  In what form and with what expression might such a poetic theatre result?  Artaud’s Theatre of Cruelty?  Meyerhold’s Constructivist Circus? As Vanitas stands now on its Round House Silver Spring stage, those results are shaky and a bit too vain. 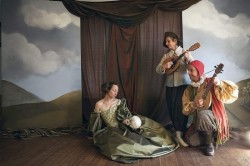 The six performers who take the stage in Vanitas have more than enough skills and charm to engage an audience: and they do, with any number of visual bits and short vignettes.  At the opening the three FATES—Gwen Grastorf, Sarah Olmsted Thomas, and Alex Vernon—offer us but a glimpse of the magical movements to come, as they interlock hands and arms in a convoluted dance equivalent of magic rings.  Then, Karen Hansen, the show’s musician and composer, enters to entertain us with her fabulous impression of a one-woman band.

Then the FATES marvelously create the dynamics of a potter’s wheel, using both mime and sound effects.  When they create, with perhaps a too great abundance of clay, the FOOL (Mark Jaster), the stage equivalent of a split-screen delights us, with the FOOL stage right and the potters up left.  Then, with exquisitely timed interactions, the FATES bring their clay FOOL to life, foot by smiling cheek.  At that point we could not help but think that a story might be emerging from that potter’s wheel, particularly as that FOOL struts and staggers around the stage like some Pinocchio.  When the FOOL then suddenly dies, we watch spellbound his bodily dysfunctions, from his first collapse to the morbid end when his stomach bloats and expires, all depicted with wonderful inventiveness by Jaster.

That story now over; a new story begins, not when the FOOL suddenly lives again, though he does, but when the not yet QUEEN, played by Sabrina Mandell (the other co-founder of Happenstance), enters.  The story of Vanitas is her story, from her inception as queen, through her declared intent to live a life of “profound” works, to her inevitable death by bodily dysfunctions.

This story begins with great promise.  As the FATES prepare Ms. Mandell for her queenly garb, they realize that a bit of modesty is the better part of theatre—no need to undress the actress in front of a gawking audience.  A room on wheels enters—in two halves—and Ms. Mandell disappears behind the re-united room; only to then, when the room separates again, reappear donned in full queenly attire . 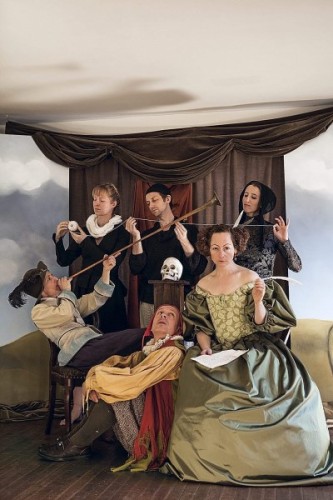 The cast of ‘Vanitas.’ Photo by Leslie McConnaughey.

It is in those moments of magical movements that Vanitas shines, giving us not just three dimensional still lifes but choreographic sleights of hand.  Where Vanitas shakes and stumbles is in the storytelling that must galvanize that magic into sense.  The QUEEN’s life-journey to find something to counter-balance the inevitability of her death never coalesces through or around a series of clearly drawn vignettes, which seems to be the structure that the ensemble used to devise this original work of theatre.  Rather, we are given abstract or far too generalized scenarios.  Of course, one could argue that if the entire performance had been but a series of theatrical magic tricks with music, we might have oohed and ahhed throughout; and that is true, but that would be mere speculation.

Instead of focusing on the storytelling, the ensemble assembled, from a plethora of sources and inspirations, quotations about death and mortality.  Unfortunately, without contextualizing stories—large or small—to give those quotations significance and perhaps new insight, the textual highlights end up sounding like a host of random clichés, which one would assume is not their intent.

As the show’s main story focuses on the relationship between the QUEEN and the FOOL, we can only assume that the ensemble intended Vanitas to fall somewhere within that well traveled “live life to the fullest” before you die domain.  Ms. Mandell’s QUEEN, however, never fully embodies the obsession with death and mortality that seemingly lies at the center of the vanitas paintings, and that would have given meaning and purpose to the QUEEN’s relationship to the FOOL.  Although her QUEEN appears on occasion distressed by death’s inevitability, we never see her haunted by it, as if she were seeing her own bloated corpse in the mirror, for example, with worms gyrating abundantly in full feast.  Without that dynamic between QUEEN and FOOL to solidify their relationship, the gravity of their story never materializes and, thus, the thematic center of Vanitas’s exploration remains unrealized.