“The acting in this production under the direction of Shakespeare veteran Tom Delise is superb.” -Steve Charing, MD Theatre Guide

Synopsis: One of Shakespeare’s most famous plays, Romeo and Juliet is the timeless story of star-crossed love torn apart by passion and vengeance. 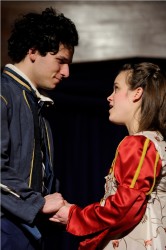 Synopsis: All of the wit and romance of Jane Austen’s classic 1813 novel come to life in this refreshingly fast-paced and engaging new adaptation. Finding a husband is hardly Elizabeth Bennet’s most urgent priority. But with four sisters, an overzealous match-making mother, and a string of unsuitable suitors, it’s difficult to escape the subject. When the independent-minded Elizabeth meets the handsome but enigmatic Mr. Darcy, she is determined not to let her feelings triumph over her own good sense — but the truth turns out to be slipperier than it seems. In a society where subtle snubs and deceit proliferate, is it possible for Elizabeth and Darcy to look beyond his pride and her prejudice, and to make the best match of all? 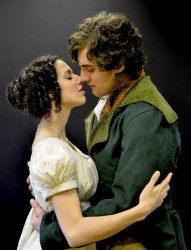 “Rockville Musical Theatre productions are often so good, that I feel that they should be labeled as professional, rather than community theatre. Their current production of ‘Nunsense A-Men!’ is no exception.” -Mark Beachy, MD Theatre Guide

Synopsis: Nunsense A-Men is basically the original “Nunsense” show with all of the characters being portrayed by male musical comedy performers. Think of it as “Mrs. Doubtfire enters the Convent.” 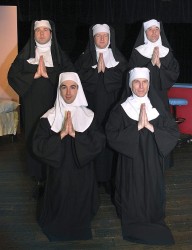 4. It’s A Bird! It’s A Plane! It’s Superman The Musical! by Being Revived at The Performing Arts Factory

Synopsis: This is the tale of Superman’s efforts to defeat a vengeful scientist who seeks to destroy the world’s symbol of good. Additionally, there is tension between Superman and a columnist for the Daily Planet newspaper because of the superhero’s attraction to Lois Lane. 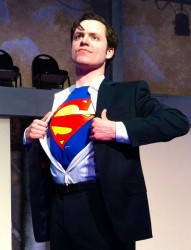 Steve Custer as Superman. Photo courtesy of Being Revived.

Maryland Ensemble Theatre (MET) is dedicated to the creation and production of extraordinary theatre art through the combined voices of a diverse ensemble of professional resident artists who are influential leaders in the community and visionaries in the art of theatre.

Synopsis: This play is a culmination of research that brings to life the stories of six remarkable women during the American Civil War era: a Richmond socialite employs her former slave and childhood apprentice to spy on the Jefferson Davis household, an immigrant woman dons the persona of a man to fight in the war for employment, a small-time war merchant travels the battlefield to supply soldiers and a slave woman intimidates her owners to allow her freedom. The original script was written in 1997 by Angela D’Ambrosia, Sophie Arrick, Meg Coyle-Stanford, Gené Fouché, Rona Mensah and Wanda Schell. 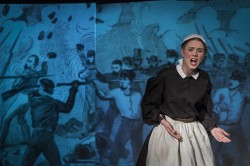