1. The VIP at Single Carrot Theatre

“The level of reality and accuracy in this performance is remarkable.” -Morgan Halvorson, MD Theatre Guide

Synopsis: In 1966 hundreds of hostages were held captive by guerilla nationalists in Peru.  Ensemble member Aldo Pantoja explores the months the hostages were held, the relationships they formed, and their struggle to stay alive. 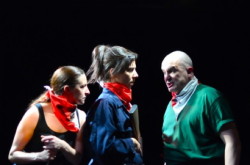 2. The Acting Company’s Of Mice and Men at GMU’s Center for The Arts

This leading American touring company brings the literary masterpiece Of Mice and Men to the stage for a memorable theatrical experience.

Synopsis: Nobel and Pulitzer Prize-winner John Steinbeck’s tragic tale tells of two drifting migrant workers in California during the Great Depression: George, a smart yet cynical man, and Lennie, a gentle giant with the mind of a child. Lifelong friends who are devoted to each other, they nurture a hopeless dream of someday saving enough money to buy a farm. This deeply moving work explores themes of loneliness and companionship, the imbalance of power and victimization, and most of all, the impossibility of the American dream. 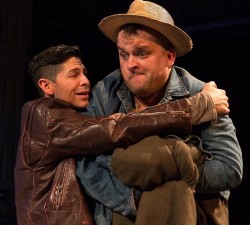 “With just the right amount of slapstick and old-fashioned charm this screwball comedy is a wonderful production for the whole family.” -Lynne Menefee, MD Theatre Guide

Synopsis: A penniless producer/con artist desperately seeks a financial backer for a Broadway extravaganza that is destined to become a sure-fire hit. The laughs come as fast as the rapid-fire dialogue in this manic backstage farce. 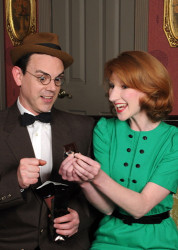 I can tell that actress Kelsey Painter always does her homework because her performances are very thoughtful.  Here she has the leading role as Sarah Gardner.

Synopsis: Cross country star Sarah Gardner was the picture of perfection. At only 18 years old her career at Thwaite Academy could not have been more impressive. So, why did she make such a devastating choice? This choice haunted classmates Julia, Maddie, and Kat silently at first and then in unexpected ways. New arrival Kenya did not bargain for this kind of perfection-pressure. Julias bad habits invite hallucination appearances from her coach and birth Father among other people and objects. In the end, could it be that the Geometer moth holds the key? 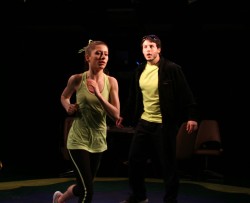 Directed by Harriet Lynn, join the Jewish Museum of MD as they introduce actress Terry Nicholetti as Bessie Bluefeld. The premiere of this one-woman (hour program) is Tuesday, April 30, 6:30 pm. The public is invited to this free program (includes light reception). There will be a post-performance question and answer period as well. Members of the Bluefeld family we are told will also be in attendance. Reservations are requested by calling the JMMD at 410-732-6400. This is a program that will bring back for many individuals fond memories of weddings, Bar Mitzvahs, Bat Mitzvahs, etc. catered by Bluefeld. Now you can learn how this successful catering enterprise came into existence by a woman of immense drive, talent and determination to make something out of nothing.

Synopsis: Bessie Bluefeld was a Jewish immigrant to Baltimore. Her entrepreneurial spirit and cooking talent, led her to become one of the most successful Kosher caterers in Baltimore. Bluefeld Catering was synonymous with quality and elegance for well over a generation. 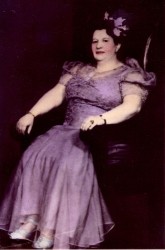 Bessie Bluefeld. Photo courtesy of the Jewish Museum of MD.