‘A Quick 5’ with Francesca Zambello 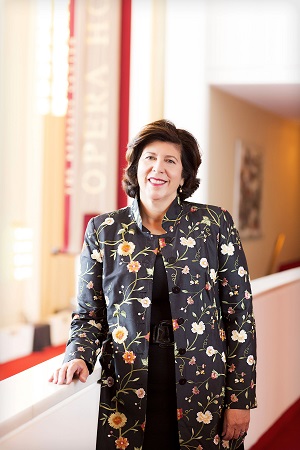 Francesca Zambello is the Artistic Director of Washington National Opera and the director of WNO’S current production of Show Boat now playing at The Kennedy Center. Previously she has served as its Artistic Advisor.  She has directed many WNO productions, including Of Mice and Men (debut in 2001), Fidelio (2003), Die Walküre (2003 and 2007), Billy Budd (2004), Porgy and Bess (2005 and 2010), Das Rheingold (2006), Siegfried (2009), and Salome (2010). Since September 2010 she has also been the Artistic and General Director of the Glimmerglass Festival in upstate New York.

She began her career as the Artistic Director of the Skylight Opera Theatre and as an assistant director to the late Jean-Pierre Ponnelle. She has been a guest lecturer at Harvard, Juilliard, and Yale. An American who grew up in Europe, she speaks French, Italian, German, and Russian. She is a graduate of Colgate University in Hamilton, New York.

She most recently developed and directed the world premiere of Christopher Theofanidis’ Heart of a Soldier for San Francisco Opera, where she served as Artistic Advisor from 2006-2011. Other recent directing highlights include a new production of La traviata for Opera on Sydney Harbor in March 2012 and a new production of Aida at the Glimmerglass Festival in July 2012.

Francesca’s musical theatre credits include Disney’s The Little Mermaid on Broadway and the national tour of Little House on The Prairie the musical which starred Melissa Gilbert from the TV series.

She has been awarded the Chevalier des Arts et des Lettres by the French government for her contribution to French culture, and the Russian Federation’s medal for Service to Culture. Her theatrical honors include three Olivier Awards, two Evening Standard Awards, two French Grand Prix des Critiques, Helpmann Award, Green Room Award, Palme d’Or in Germany, and the Golden Mask in Russia.

Did you start out directing operas and then move over to musical theatre or was it the other way around?

I started directing plays in high school and college. Then I did musicals and operas in equal doses when I ran the Skylight Opera Theatre in Milwaukee, Wisconsin.

What are some of the biggest differences between staging an opera and a standard musical?

The way the performers prepare. 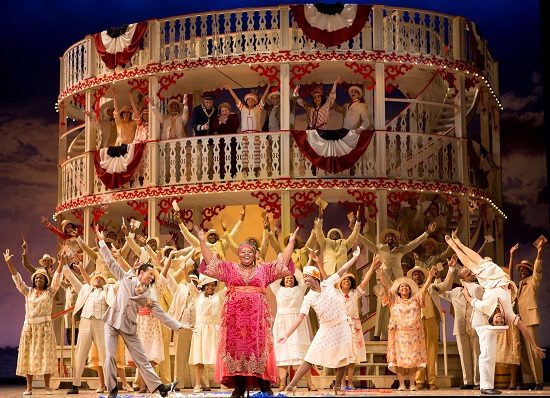 Angela Renée Simpson as Queenie (center, in pink dress) and the company of Show Boat. Photo by Scott Suchman.

Can you please tell us what makes your production of Show Boat unique from all of the other productions of the show?

It is probably what it was like at its premiere in 1927. A mix of opera and musical theater, performers, two full large choruses (African American and Caucasian), two sets of dancers, and an orchestra of 50.

You directed Disney’s The Little Mermaid on Broadway. That film is one everybody knows. When you were offered the project, what were your first thoughts on how to keep faithful to the film while turning it into a totally different experience for the stage?

Theater is a different medium than anything else. The hardest thing was how to tell the story of an independent teenager while everyone is supposed to be swimming everywhere!

Can you please tell us what your next few directing projects are and what audiences can look forward to at Washington National Opera for its 2013/2014 season?

I am thrilled to be directing both Verdi and a world premiere in the same season! Verdi’s The Force of Destiny hasn’t been seen at WNO in nearly 25 years, and The Lion, The Unicorn, and Me will be a wonderful holiday piece for the whole family. They both speak to my various personal loves. WNO also has a great all-American winter season including the East-Coast premiere of Jake Heggie’s fabulous Moby-Dick. It will be a great time to hear American music from the national opera company.