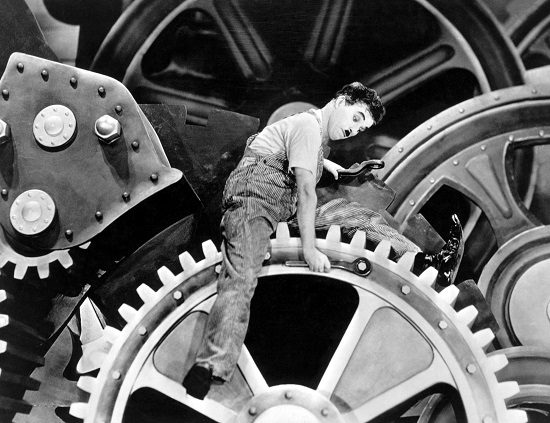 The Tramp working on the giant machine in the film’s most famous scene.

Following the successes of the BSO’s presentations of The Gold Rush and City Lights, Marin Alsop and the BSO return to pay tribute to Charlie Chaplin by presenting his 1936 film Modern Times, a brilliant, biting satire on the mechanical age. The BSO accompanies this cinematic masterpiece, performing Chaplin’s own original score.

Modern Times was ahead of its time when it opened in 1936 and is still relevant and entertaining today.

The movie opens with a title proclaiming “Modern Times is a story of industry, of individual enterprise-humanity crusading in pursuit of happiness.”  The next two shots are of a herd of sheep entering a slaughterhouse and a group of workers exiting a subway at rush hour. How many people still feel as though they are being led to the slaughterhouse everyday with their jobs?

In this story, Chaplin is a factory worker employed on an assembly line. The audience at Baltimore’s Meyerhoff verbally gasped in awe when Chaplin slid down the moving belt on the assembly line and into the machine of rollers, cogs and gears.

After tightening up bolts all morning long,  it is now lunch time for the Tramp.  All he has for lunch is a roll.  But that is about to change. Through a record, “The Mechanical Salesman” talks about The Billows Feeding Machine, “a practical device which automatically feeds your men while at work. Don’t stop for lunch, be ahead of your competitor.  The Billows Feeding Machine will eliminate the lunch hour, increase your production, and decrease your overhead.”  The owner of the factory allows the machine to be tested.  Chaplin is the guinea pig in what is one of the funniest scenes in motion picture history.  From the hot soup that is spilled all over him to the corn on the cob feeding device that overheats, spinning out of control on Chaplin’s trademark mustache, this scene is still making people of all ages laugh. 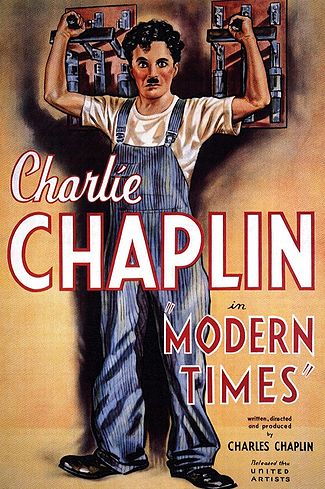 Charlie Chaplin’s film score included music (The Romance Theme) that would later be given lyrics, turning it into the song, “Smile.”  The Tramp’s love interest, an orphan girl (Paulette Goddard), said (not spoken, but with titles) “What’s the use of trying?”  That sentence would be later be included in the lyrics. The song “Smile” is still popular today.  It has been recorded by such popular artists as Tony Bennett, Judy Garland, Michael Bublé, and Michael Jackson.  The BSO’s string section really brought out the heart of Chaplin’s timeless song, “Smile.”

Marin Alsop and the BSO did a magnificent job at bringing Chaplin’s masterpiece Modern Times to life.  Playing for almost an hour and forty minutes straight and timing the music just right to be in sync with the film was not an easy task, even though Marin Alsop made it look easy. The standing ovation at the end of the wonderful evening lasted for about 5 minutes and the BSO deserved every minute of it!

Arrive early before the concert starts to participate in the “Text-to-Win” Trivia Contest sponsored by Vocus. Test your knowledge of Charlie Chaplin and his iconic masterpiece Modern Times while competing for a fantastic prize.  A few of the questions are answered in this review!

If you like seeing films with a live orchestra, then you might enjoy the BSO’s production of West Side Story this June. Next season, the BSO plans to present Charlie Chaplin’s The Kid.

Running Time: one hour and forty minutes with no intermission.

BSO’s presentation of Modern Times has one more performance Sunday, May 12 at 3PM at the Meyerhoff, 1212 Cathedral St, Baltimore, MD 21201.  For information visit online.